The most popular form of passive investment benchmarks are those where constituent stocks are weighted by market capitalisation, such as the S&P 500 Index and the S&P/ASX 200 Index.

Critics of market capitalisation-weighted indices highlight the fact that investors using such indices end up having exposure to more of the over-priced and less of the under-priced stocks.

Indices based on equal weight historically have produced long-term outperformance relative to their market cap-weighted equivalents.

In the case of the S&P 500 Indices, the outperformance over the past 20 years has been +2.17% p.a.2  The outperformance of equal weight over the long term has not been confined to the U.S. and has also been evident in many other regions and countries3.

Source: Bloomberg, BetaShares. Data as at 30 November 2020 and in AUD. Chart is provided for illustrative purposes only and reflects hypothetical historical performance. Prospective application of the methodology used to construct an index may not result in performance commensurate with the back-test returns shown. The back-test period does not necessarily correspond to the entire available history of an index. You cannot invest directly in an index. Index performance does not take into account any ETF fees and costs. Past performance is not indicative of future performance of any ETF or index.

That said, over the shorter run, the equal weighted index has gone through periods of underperformance. The chart below shows the rolling 3-year relative returns since 1993, and whilst there have been periods of equal weight underperformance (including the most recent period), equal weight has outperformed the majority of the time (62%). What is also evident is the magnitude of the excess returns over such periods, even though both indices comprise the same stocks. Source: Bloomberg, BetaShares. Data as at 30 November 2020 and in AUD. Chart is provided for illustrative purposes only and reflects hypothetical historical performance. Prospective application of the methodology used to construct an index may not result in performance commensurate with the back-test returns shown. The back-test period does not necessarily correspond to the entire available history of an index. You cannot invest directly in an index. Index performance does not take into account any ETF fees and costs. Past performance is not indicative of future performance of any ETF or index.

What has driven the long-term outperformance of the S&P 500 EW Index?

What have been the drivers of this outperformance?

Empirical evidence finds that the majority of returns within an index are clustered at the lower end of the return distribution, and that a small subset of stocks typically delivered very large positive returns4. This means that the average return will generally be greater than the median return. In statistical terms, stock returns are not normally distributed, but rather display a positive skew5. 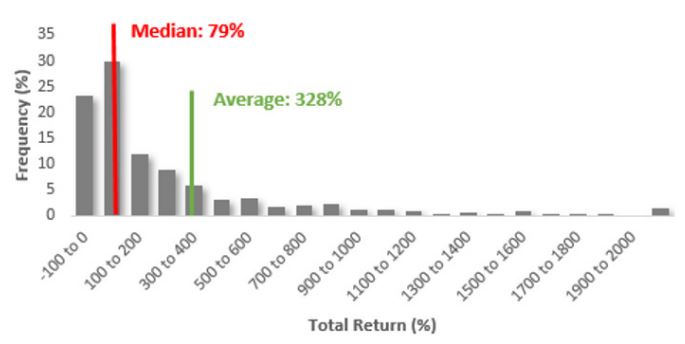 The relevance and implication for equal weighting is significant.

Given that the average return is higher than the median return, it means that more than half the stocks delivered a return below the average. Equal weight indices such as the S&P 500 EW Index, where 400 out of the 500 stocks have a higher weighting than the equivalent market cap index, have a higher probability of an overweight position in the smaller subset of stocks with outsized returns.

Momentum strategies, on the other hand, do exactly the opposite. Winners are generally added to, and losers are sold. It is for this reason that equal weight strategies have tended to display negative-momentum properties.

The size premium refers to the empirical evidence that smaller companies have tended to outperform larger capitalisation stocks over the long run7,8.

An equal weighting approach has the effect of overweighting smaller companies and underweighting larger cap stocks compared to a market cap-weighted approach.

Over the last two years, larger companies have outperformed strongly against a global backdrop of lower economic activity and greater uncertainty regarding the growth outlook. Smaller companies tend to be more cyclical in nature and the relative performance may well mean-revert in the event of an increase in global economic activity.

Equal-weighting benefits by avoiding the susceptibility of market cap-weighting approaches to occasionally become overly concentrated in large stocks that have enjoyed strong price momentum for some time, and so are at increasing risk of an eventual performance reversal if their valuations get too extreme.

In recent times, the market-cap weighted approach has tended to outperform equal weighting, given the very strong performance of the largest stocks in the S&P 500, including Apple, Amazon and Facebook.

However, historical evidence suggests equal-weighting has more than made up lost ground when such price trends have reversed – and the relative performance of these large ‘hot’ stocks have begun to reverse (market concentration declines).

Market concentration is currently high by historical standards, with the top 5 stocks accounting for well over 20% of the S&P 500 Index9 – a level of large-cap stock concentration even higher than during the ‘dotcom’ bubble of the late 1990s, and not seen since the early 1970s.

The chart below shows the clear negative correlation between the relative performance of the S&P 500 EW Index vs. the S&P 500 and the level of market concentration to the top five stocks.

Source: Bloomberg, S&P Dow Jones. Provided for illustrative purposes only. You cannot invest directly in an index. Index performance does not take into account any ETF fees and costs. Past performance is not indicative of future performance of any ETF or index.

History suggests such an extreme level of market concentration is at growing risk of reversal, in which case the equal-weighted index may once again re-commence its trend outperformance against its market-cap weighted counterpart.

Equal weight indexing does not necessarily mean equal sector weights. However, it’s worth noting that the S&P 500 Equal Weight Index’s sector weight distribution is more closely aligned with equally weighted sectors, and so on this basis is considered more diversified than the market cap-weighted index.

The chart below shows the more consistent distribution of sector weights over time for the S&P 500 EW Index compared to the S&P 500 Index. 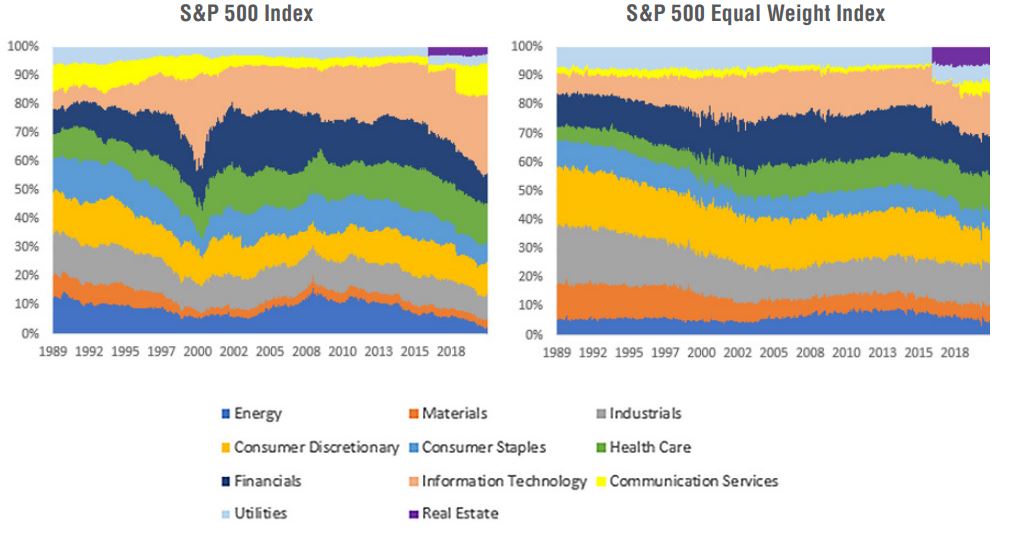 How can advisers use QUS within client portfolios?

QUS can be used a long-term core component of a global equities allocation, offering the potential to outperform the market cap-weighted S&P 500 Index over the long term.

It can also be used as a short/medium term tactical allocation for clients seeking to take advantage of periods where they believe mean reversion will benefit an equal-weighted approach.

Another potential application is to combine the equal-weighted approach of QUS with a momentum-based approach, in a ‘barbell strategy’.

This strategy reflects a view that if both approaches tend to produce relatively good returns over time, but at different points in the cycle, a blended exposure could help to reduce the overall volatility of portfolio returns.

As an example, the Nasdaq-100 Index has tended to outperform the S&P 500 Index over time, and could benefit from strong price momentum effects as successive generations of dynamic new companies succeed and grow.

As the chart below shows, there has tended to be a negative correlation between the relative performance of the Nasdaq-100 Index and the S&P 500 EW Index versus the S&P 500 (market-cap weighted) Index, such that a blended exposure to both historically has resulted in a ‘smoother’ trend of outperformance. 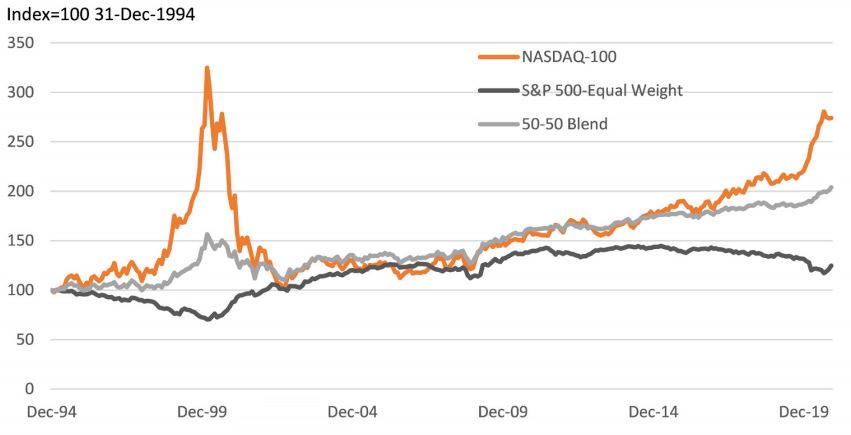 Source: Source: Bloomberg, S&P Dow Jones. Provided for illustrative purposes only. Not a recommendation to make any investment decision or adopt any investment strategy. You cannot invest directly in an index. Index performance does not take into account any ETF fees and costs. Past performance is not indicative of future performance of any ETF or index.

The power of equal weighting has been demonstrated in the long-term outperformance of the S&P 500 EW Index vs. the market cap-weighted S&P 500 Index.

Recent years have seen relative underperformance from the equal weighted strategy due to significant price appreciation and momentum in a narrow set of U.S. megacap, sector-specific stocks. However, an exposure to the S&P 500 EW Index has the potential to outperform upon any mean reversion. Historically, excess returns of equal-weighted approach have tended to be significant during such reversion events.

There are risks associated with an investment in QUS, including market risk, index methodology risk, country risk and currency risk. For more information on risks and other features of QUS, please see the Product Disclosure Statement, available at www.betashares.com.au. This information is not a recommendation to invest or adopt any investment strategy.

Licensed adviser use only. Not for distribution to retail clients.

1. To 30 November 2020
2. To 30 November 2020
3. Edwards T (2019): There’s Nothing Equal About Equal Weight Performance
4. Bessembinder H (2018). “Do Stocks Outperform Treasury bills?” Journal of Financial Economics
5. A normal distribution displays symmetrical properties with similar shaped left and right tails, the majority of returns clustered around both the average and the median.
6. Perold, A. and Sharpe W. (1995), “Dynamic Strategies for Asset Allocation” Financial Analysts Journal
7. Banz, R.W. (1981). “The Relationship between Return and Market Value of Common Stocks.” Journal of Financial Economics
8. Fama, E. F.; French, K. R. (1992). “The Cross-Section of Expected Stock Returns”. The Journal of Finance
9. As at 1 March 2021
10. Other costs, such as transaction costs, may also apply. Refer to the PDS for more information.