IIND: simple-to-access, cost-effective exposure to India’s fast-growing economy, with the kicker of a recent cut to Indian corporate tax rates

Indian corporate tax cuts: the spark that lights the fire for Indian equities?

In September last year, the Indian government announced a surprise corporate tax cut, taking the corporate rate to one of the lowest in Asia.

The base rate applying to domestic companies was reduced from 30% to 22%, applying to income from 1 April 2019. The effective rate, including various surcharges and levies, now stands at just over 25%.

In addition, new manufacturing companies formed after 1 October 2019 are taxed at a rate of only 15%, an effective rate of 17% after levies, placing them on a tax footing equivalent to Singapore, among others.

As the chart below shows, the tax cut moves India significantly down the ‘tax ladder’.

What impact are the tax cuts likely to have?

The Indian Government hopes that the lower rates will give domestic companies an incentive to boost capex and increase India’s attractiveness to foreign manufacturers.

According to estimates from Goldman Sachs, as of September 2019, 61 out of 79 MSCI India stocks (~75% of the index weight) had an effective tax rate above the new tax rate of 25%. The reduced rates imply a tax saving of ~US$6bn for the broad MSCI India index and a ~9% boost to FY20 profits.

Potential to benefit from tariff wars

Beyond improving corporate profitability, the tax reforms are significant as they have the potential to re-position India as an alternative to China for labour-intensive manufacturing.

The Indian corporate tax rate is now in line with other low-rate jurisdictions in the region. India is now more competitive than neighbouring Bangladesh and very close to Thailand and Vietnam. Despite the Phase 1 agreement, China-US trade tensions linger, and many multi-nationals may be looking to diversify their global manufacturing bases and shift regional production to India.

The tax cuts are only part of the reformist approach taken by the government of Narendra Modi, which was returned for a second term in 2019. Modi’s reform program includes major infrastructure projects, such as doubling the length of national highways, 100% electrification of all households and significantly increasing the number of airports across the country.

These reforms, combined with India’s favourable demographics, including its very young population (the United Nations estimates the mean age of India’s population at only 28 years, compared to 42 years globally and 38 years in China1), rising middle class, and increasing urbanisation, are all supportive of the IMF’s forecast that India’s economy will grow at a significantly faster rate than the world economy, in particular advanced economies. The IMF forecasts that India’s GDP will grow by 5.8% and 6.5% in 2020 and 2021 respectively, compared to growth of 1.6% p.a. in advanced economies, and world growth of 3.3/3.4% p.a. in 2020/20212.

We believe the BetaShares India Quality ETF (ASX: IIND) is well-placed to benefit from this potential Indian growth.

IIND’s index methodology focuses on quality companies (those that score highly on financial metrics such as high return on equity, moderate to low leverage and good historic earnings stability). It also has an equally-weighted mix of large and mid-cap Indian companies.

We believe this approach provides better exposure to the dynamic smaller-cap companies that can capitalise on the strong growth potential of the domestic economy than traditional market cap-weighted approaches.

India has one of the most concentrated stock markets in the world, with the top ten stocks accounting for around half the market cap. A market cap-indexing approach can consequently result in substantial concentration risk, a risk that is reduced by IIND’s more balanced allocation of funds across large and mid-sized companies. 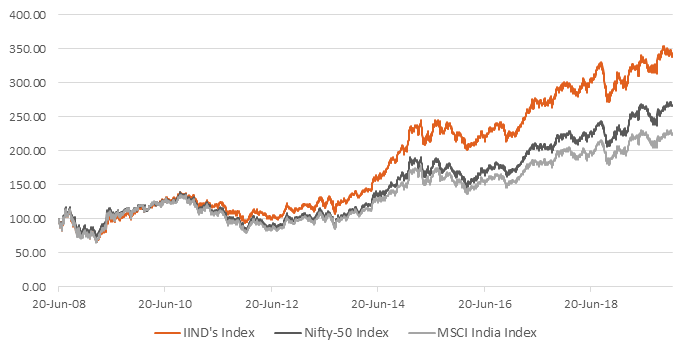 We believe India represents a compelling investment case for investors looking for growth, and the 2019 corporate tax cuts only increase the attractiveness of an exposure to this fast-growing economy.

For more information on the India Quality ETF, go to IIND.

There are risks associated with an investment in IIND, including market risk, emerging market risk, currency risk and index tracking risk. For more information on risks and other features of IIND, please see the Product Disclosure Statement.