Are you caught in the 'retirement trap'?

Two of the primary goals of Australia’s superannuation system are to encourage financial independence in retirement, and to reduce reliance on the age pension. However new analysis confirms that for some retirees, the structure of our retirement system works against these goals. For retirees caught in this trap, saving and investing more can actually result in lower income in retirement.
The ‘Retirement Trap’ anomaly results from the progressive reduction of age pension entitlements as assets and income in retirement increase above certain thresholds.

The current retirement system in Australia sees retirees drawing income from a combination of superannuation, the age pension and external assets. The pension is means tested, with the level of entitlement calculated using an income test and an assets test. As assets and income levels increase, pension entitlements are phased out. Above certain levels, all pension (and other entitlements) cease. These entitlement levels and associated reduction in the pensions are the primary drivers behind the Retirement Trap.

Specifically, for an individual, there is an income range between $174 and $2,026 per fortnight, where for every additional dollar earned, the pension is reduced by 50 cents. This effectively halves the value of additional earnings for retirees in this range.
On the assets side, for individual homeowners whose assessable assets are above $263,250, the pension is reduced by three dollars a fortnight (or $78 per year) for every additional $1,000 in assets. To offset this reduction, each $1,000, if invested, must generate an annual return above 7.8%.

Work co-authored by Dr Roger Cohen, Senior Investment Specialist at leading ETF provider BetaShares, shows that for Australians at ‘retirement age’1, with savings of between ~$350,000 and ~$600,000, increasing their savings may result in their income decreasing. This effect, also termed the ‘Pensioner Taper Trap’, has been illustrated and modelled by other researchers2,3.
Reductions in income can occur because such savings increases are unlikely to generate enough additional income to offset the pension entitlements that are lost.

To illustrate the Retirement Trap, BetaShares introduced the concept of a pension multiplier. This is a number (greater than or equal to 1) which represents the current or future income stream a retiree can expect relative to the age pension (for example, a pension multiplier of 1.5 means that income of one and a half times the government pension can be expected in retirement). The Simulation of Uncertainty for Pension Analysis (SUPA) model, developed at CSIRO Data61’s RiskLab, is used to calculate the resulting pension multiplier expected from various investment strategies.

The SUPA model is a statistical tool which uses the behaviour of economic factors such as inflation, interest rates and asset returns to generate long-term forecasts. Around 100,000 forecasts for each investment strategy were used to generate the results shown below.

Five different investment strategies, ranging from 30% to 100% allocations to growth assets – Conservative, Moderate, Balanced, Growth and High Growth – were tested. Under all these strategies, the Retirement Trap can be observed in the graph below. 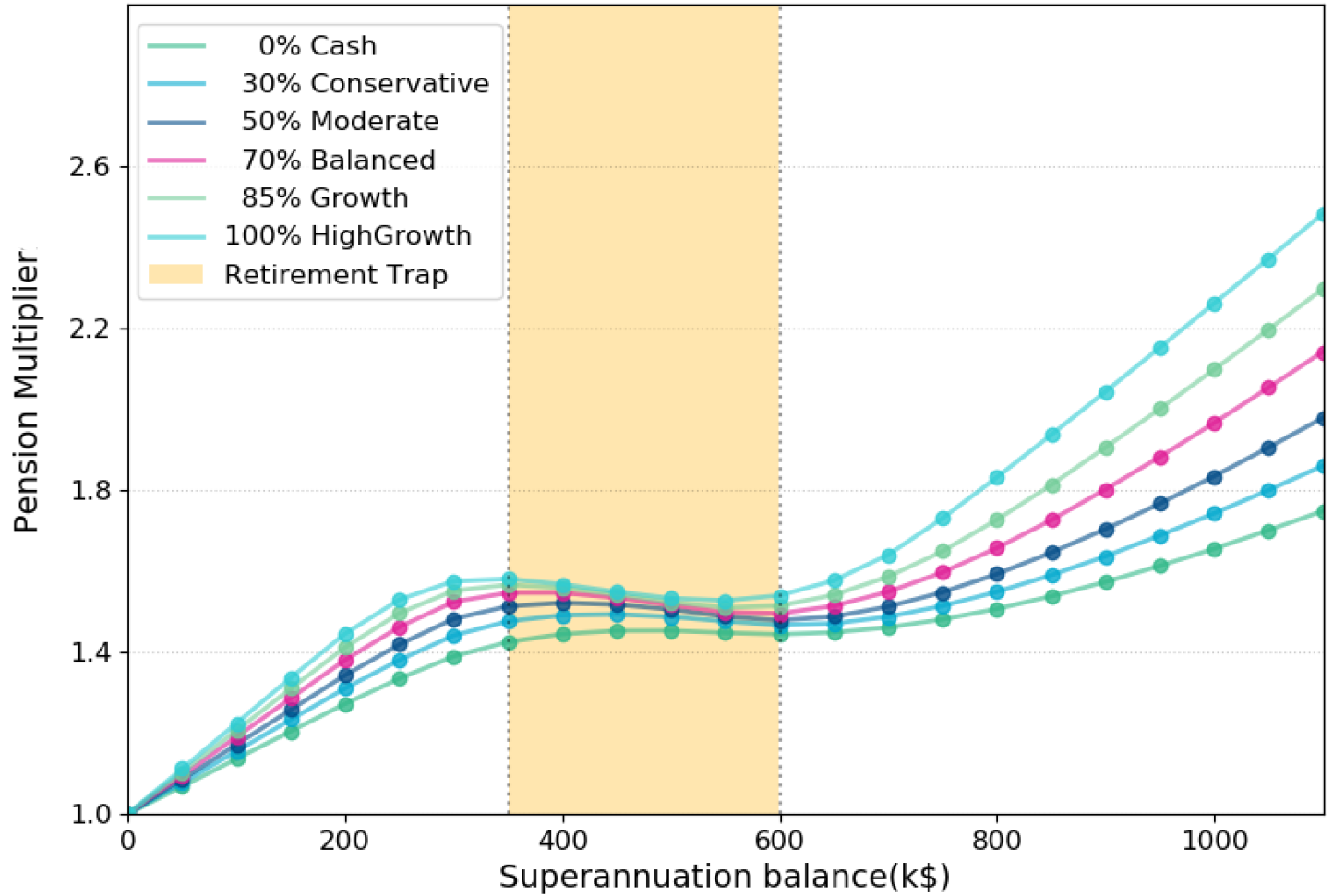 The system therefore implicitly encourages these retirees to spend additional savings or redirect them towards exempt assets like their homes, instead of choosing to invest them to generate income.

If a retiree in this scenario does invest their additional savings, they must generate returns that are well in excess of 7.8% per annum to exceed the pension entitlements that are lost. This is likely to entail a level of risk which is well beyond what is normally recommended for retirees.

The analysis illustrates that Australian retirees currently can escape the Retirement Trap only if they can accumulate well over half a million dollars. Above this point increased savings will lead to increased income.

The consultation period for the Government’s Retirement Income Review has finished in February.

BetaShares made a submission to the Panel outlining the Retirement Trap anomaly, and proposing a new model for the retirement system that would mean Australian retirees can choose to spend or save additional income or assets based on their personal circumstances, without that choice being distorted by the structure of the system.

Under the proposal, the age pension would become universal, with the means and assets tests discarded.

BetaShares acknowledged that such significant changes to the superannuation system would be controversial, but argued that the proposed model would not only remove the distortions that discourage a certain group of retirees from increasing their financial independence, it would also reduce the financial burden on the Government.

The current structure of Australia’s retirement income system can produce unintended and undesirable outcomes for certain retirees, due to the interaction between the eligibility for pension entitlements and the assets and income tests.

This Retirement Trap affects retirees with superannuation balances between ~$350,000 and $600,000. For these retirees, the progressive withdrawal of the pension creates a bias towards short-term spending, or directing resources into exempt assets such as the home, ahead of using assets to generate long-term additional income.

1. The analysis used age 67, which will be the age at which Australians are eligible for the aged pension in 2023.
2. https://nationalseniors.com.au/uploads/End-the-pensioner-trap-media-release.pdf
3. https://nationalseniors.com.au/uploads/Taper-Rate-Fact-Sheet-for-Media-release-002-.pdf
4. The full study can be found at: https://www.betashares.com.au/files/collateral/BetaSharesTheRetirementTrap.pdf