The stand-alone highlight this past week has been global fear around the escalation of coronavirus cases outside of China.  The good news is that while containment (appears) to have been achieved in China, the wave of infections is still rolling out elsewhere.

How bad is it? Unlike the SARS outbreak of 2003, if left uncontained, this influenza appears as highly contagious as past pandemic outbreaks in 1918, 1957, 1968 and 2009.  What’s less clear is its lethality – its average global mortality rate is still around 3.5%, or many times worse than all pandemics since 1918. 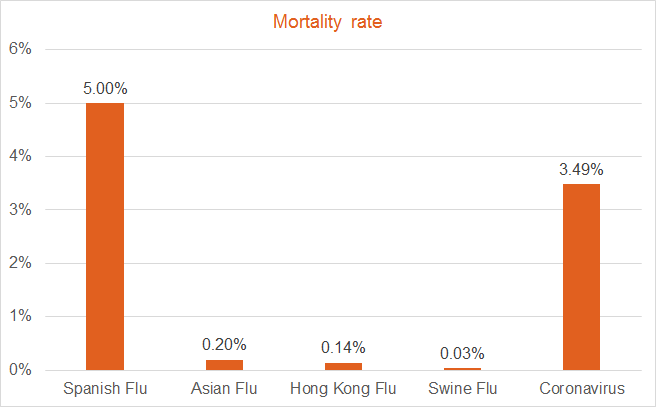 So at face value, this outbreak could be the worst since the devastating Spanish flu of 1918, which latest estimates suggest killed around 17 to 50 million, or 1.5% of the then global population. If repeated today, that would amount to 117 million dead.

Of course, the world may well be better at containing and treating the virus this time around. Indeed, although it will be devastating to global economic growth in the short term, efforts at containment might actually work – the rate of new cases globally only lifted by 20,000 over the past week.

What’s more, its actual mortality rate is also still debatable – in South Korea, for example, only 0.6% of those reported to have been infected have died so far.  In China, the mortality rate outside of the two worst affected provinces is also less than 1%.  Of course, it could also be the case that the number of actual infections is being grossly under estimated (which seems reasonable given its highly contagious nature) – which would also imply a lower death rate than current estimates suggest.  So there’s still a chance this might still end up closer to the 2009 Swine flu pandemic – which ended up being so widespread yet mild in the United States that authorities largely gave up trying to contain it – and, as a result, it barely caused a ripple in the overall economy or equity market.

That said, it seems likely we’ve yet to see the bottom in the equity sell-off, especially as reports of new infections (and deaths) likely mount in the United States.  Weak economic data in this environment is a given and likely already discounted by the markets – what will be critical for a market bottom is evidence that either containment has been achieved in the United States and/or the death rate is actually far lower than current global estimates suggest.

Either way, this information is unlikely anytime soon.

Along with virus updates, critical to watch in coming weeks will be timely US economic data – such as weekly jobless claims and consumer confidence.  What we do know (as evident from Friday’s blockbuster payrolls result) was that the US economy had considerable momentum at the time the virus struck.

Hot of the press, moreover, oil prices have collapsed over the weekend following the failure of OPEC and Russia to agree on new production cuts.  US futures suggests this will weigh on Wall Street when it opens tonight, as it will hurt both the shares and high-yield bonds of many shale oil producers.

Sadly, Australia’s economy had a lot less momentum before the virus struck and is one of the developed economies most exposed to China’s slowdown.  Although last week’s Q4 GDP came in “better than expected”, it was only 0.1% above the market expectations of 0.4%, and 2% annualised growth is hardly worth getting excited about. Retail sales and building approvals last week were also quite weak.  Treasury, meanwhile, has all but conceded economic growth in the March quarter will be negative.

I hate to admit it, but a technical recession in Australia – i.e. two quarters of negative growth – is now at least a 50-50 proposition, especially if business and consumer sentiment deteriorate further in the face of very challenging news over the next few weeks.  One hope – as evident during the GFC – will be a burst of fiscal stimulus, potentially via a “fistful of dollars” in consumer pockets to hold up growth in the June quarter.  The Government said it will unveil its stimulus plans sometime this week.

As regards the RBA, a follow-up rate cut in April now seems all but assured, with “quantitative easing” also on the cards by mid-year – potentially pushing down the yield on 10-year government bonds from around 0.7% to as low as 0.25% (if we don’t get there before hand!).

To my mind, such a move would have little direct benefit to the economy, though potentially an indirect effect – to the extent that the RBA is still “being seen to be doing something” it avoids having to admit to a concerned public that it has run out of policy bullets.

Try to have a good week! 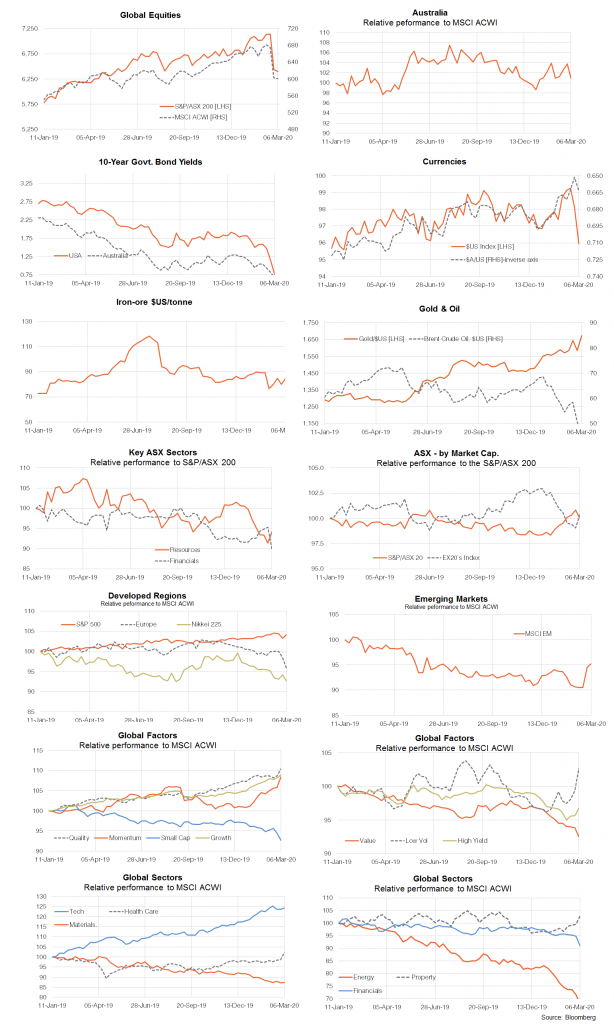