Global equities continued to rally last week, buoyed by ongoing hopes that the US and China will eventually conclude a trade deal – despite some uncertainty over whether existing tariffs will be rolled back or not.  Despite his bluster that “China wants a trade deal more than I do”, markets sense that Trump is likely quite keen to call a truce on what is becoming a serious US economic risk heading into the 2020 election year.

In other news, global data generally held up well last week, with various measures of US service sector activity remaining in expansion territory. Even in Europe, retail sales and German factory orders were a bit better than expected in September, though German industrial production remained a bit weaker than expected.

Focus this week will again be on any reports on US-China trade negotiations.  My sense is China is probably trying an 11th hour push back again, sensing Trump’s vulnerability. So there is still a lingering risk that talks could fail once again, in which case the recent “risk-on” global sentiment could be quickly unwound.  In this regard, we’ll get an update on the health of the Chinese economy with industrial production and retail sales on Thursday, while US retail sales and industrial production is released on Friday.  German GDP data on Thursday will likely show a second successive negative result, confirming the economy slipped into a “technical recession” in mid-2019. 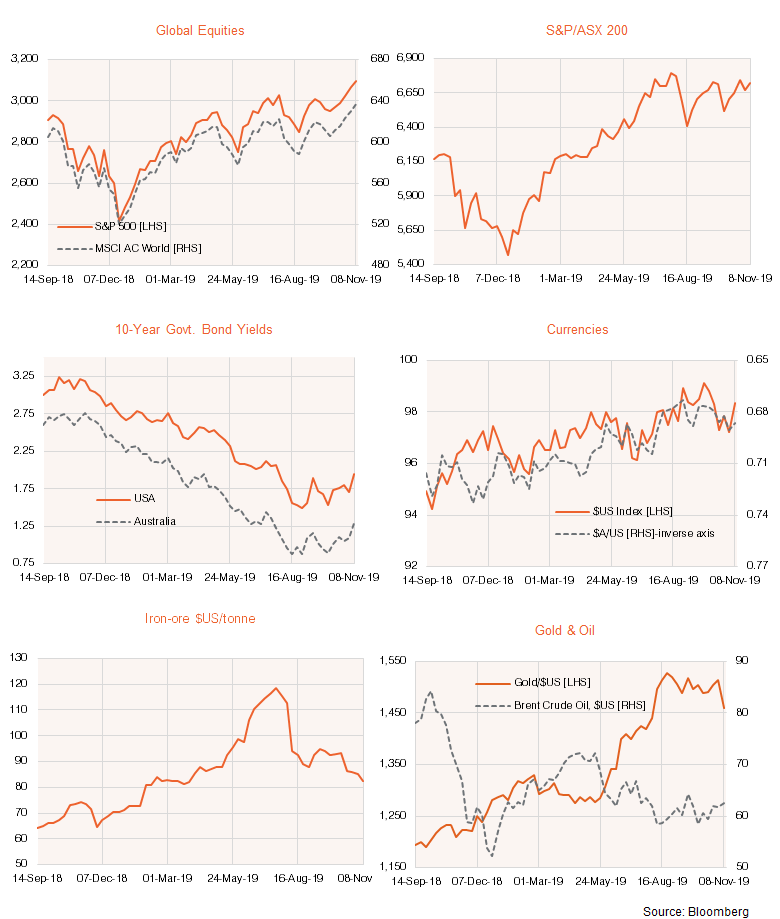 Local economic data was mixed last week, with another soft retail sales report yet further strength in home loan demand. Sales contracted by 0.1% in volume terms in the September quarter, with annual growth in volumes the weakest since the early 1990s recession.  Housing finance approvals, however, lifted further in September, consistent with the recovery in established house prices in recent months.

The RBA left rates on hold as expected, through retained an easing bias.  My call is the RBA will deliver it’s final rate cut in February next year, after which it will undertake an Australian-style “quantitative easing” program, principally via buying up government bonds.

Note the RBA’s Quarterly Statement on Monetary Policy (SOMP) painted a picture in which wage and price inflation is likely to remain very subdued for at least the next two years.  That said, the RBA still sees the economy picking up some strength over the coming year, largely reflecting hopes for a lift in consumer spending due to a lift in income and higher house prices.  To my mind, the RBA still remains a touch too optimistic on economic growth, as it is not factoring in a likely slowing in employment growth and lift in unemployment over the coming year, if only because of the direct and indirect effects of the contraction in housing construction.

In this regard, important updates on business and consumer sentiment will be released this week, with the NAB business survey on Tuesday and the Westpac consumer sentiment index on Wednesday.  The market also anticipates a small rebound in the unemployment rate to 5.3% with the jobs report on Thursday.

One hope for the RBA is that the $A could weaken a lot further, which would be an important aim for quantitative easing next year. Indeed, it was interesting to see research mentioned in the SOMP showing the positive economic impact of a weaker currency. Given likely relative softness in the economy next year, and the RBA’s QE policies, my new target for the $A is a fall to US62c by end-2020.