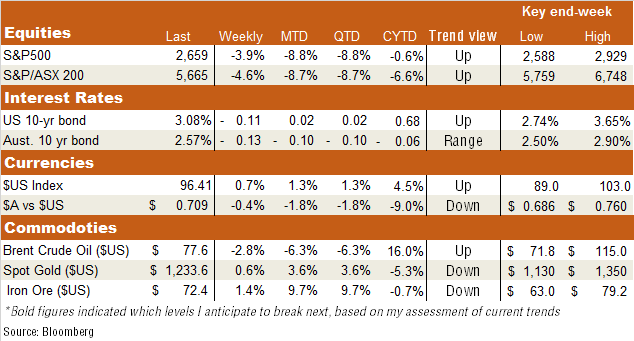 Global equity market weakness – led by NASDAQ’s tech darlings – was again the dominant market feature of the past week.  That said, what was curious is that there seemed few obvious macro-events behind the market’s  dive.  It appears much ado about nothing.

US GDP, for example, grew at an annualised 3.5% rate in Q3 – slightly beating market expectations.  Although there is the usual array of hits and misses, the US Q3 earnings reporting season is so far also progressing well.  According to FactSet, 77% of the 48% of S&P 500 companies that have reported earnings beat estimates, which is still above the 5-year average of 71%. 59% of companies have beaten revenue estimates, which is equal to the 5-year average. As for guidance, 63% of companies have issued a negative outlook, which is below the 5-year average of 70%.  Of course, a focus of the past week were the results of Alphabet (Google) and Amazon. Although both released better than expected earnings results, each had revenue just shy of expectations.

Either way, a nervous market remains in a very unforgiving mood.  Fundamentally, the underlying concerns appear to be the potential for a slowing in both the US economy and earnings growth in 2019 as the Trump tax cuts fade and the Fed seemingly persists in raising rates.  I’d note, however, that some slowing in US growth – from the recent above-potential 3 to 4 % pace should be expected, as should a slowing in earnings growth from the 20% or so pace of late.  That’s a recipe for slower share price gains, but not a bear market.  What’s more, if the economy did slow, the Fed’s view of rate rises would obviously change – unless of course inflation pressures present a problem. That’s why the US inflation and wages outlook, in my view, remains so critical.

Locally, there was little fundamental new news, with stocks taking their lead from the weakness on Wall Street. The risk-off mood also pushed the $A perilously close to breaking below US70c.  This ultimately is great news for the stock market, given it should support trade and lead to an upgrade in the value of offshore corporate earnings!

There is a range of interesting local data this week, including building approvals, retail sales, house prices and the CPI.  All up, the data are likely to confirm the economy is muddling along – with lingering vulnerabilities around housing and consumer spending – and insufficient inflationary pressure to justify an RBA rate hike anytime soon.

In the US, the earnings season continues, with Apple and FaceBook this week’s headline acts. But perhaps even more critical for global markets will be Friday’s US payrolls report.  Having been held down by hurricanes last month, monthly employment growth is expected to bounce back to around 200k. Also critical will be average hourly earnings (AHE) – although only a modest 0.2% monthly gain is expected, this will still be enough to cause the annual (year on year) rate to lift to 3.2% from 2.8% – due to hurricane related distortions this time last year. It should be noted that monthly wage growth has been running at an annualised pace of over 3% in the past three months, so an eventual lift in annual growth toward this pace was likely soon.  That’s still consistent with moderate US inflation, but the worry will be when and if wage inflation pushes up toward a 3.75-4% pace.

Click here to register for this Wednesday’s webinar, as I provide an update on the current investment climate.