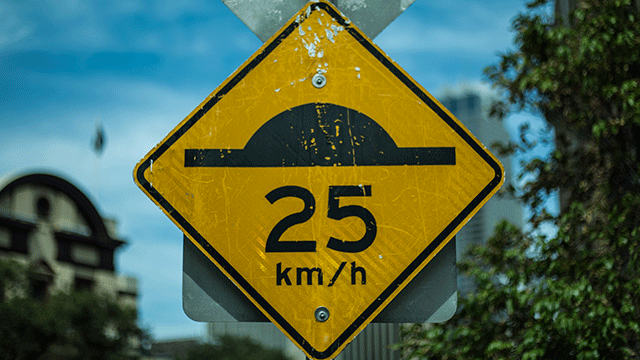 After having once worried about rising interest rates due to a strong US economy, global investors are now fearing that the economy is slowing too quickly – as apparently evident from an “inversion” of the US yield curve at some maturities.   This note suggests, however, that even were the yield curve hinting at a slowdown ahead – which is still debatable – the negative impact on equity markets could still be some time away.

Yield Curve Inversion: should we worry?

Amid the swirling array of economic indicators investors have had to digest in recent times, one that has attracted attention in particular has been a flattening in the US yield curve. Indeed, in recent weeks the yield on 3-year US government bonds rose above that of 5-year government bonds, implying an “inversion” at this part of the yield curve.  Markets are worried because this could signify an eventual inversion of the more widely watched spread between 10-year and 2-year government bond yields, which has happened ahead of each of the last 5 US recessions.

As seen in the chart and table below, however, there are several reasons to downplay the risk from yield curve inversion.  For starters, historically the yield curve has tended to invert when Federal Reserve policy was relatively tight – with an average “real” Fed funds rate at inversion of 3.2%*.  The curve tends to invert because tight Fed policy causes the market to expect, not unreasonably, an economic slowdown and lower interest rates later. 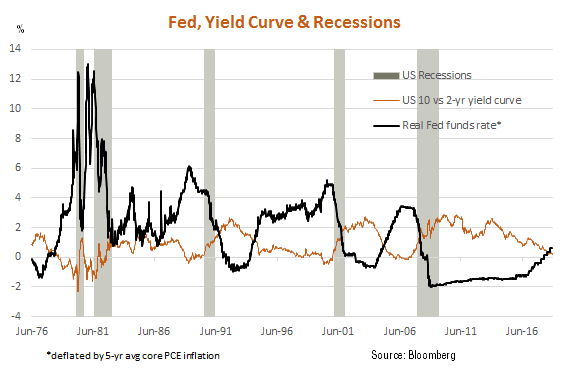 At present, however, the real Fed funds rate is only 0.6% – which is hardly restrictive.  The curve is probably a lot closer to inverting now due to a structural flattening of the yield curve slope over time – caused by reduced inflation expectations but also downward pressure on long-term yields due to the lingering effects of quantitative easing programs in several major economies.

What’s more, as we’ve previously explained, even if the curve did invert soon – and was reflective of relatively tight Fed policy – the impact on markets and the economy generally takes place only with a considerable lag.  As seen in the table above, the average duration from the curve’s first inversion in a cycle to an equity market peak (using the S&P 500 index) is 13 months.  The average duration from an equity market peak to each of the past 5 recessions is 8 months – implying an average lag from curve inversion to recession of 21 months.  For investors at least, history suggests that were the curve to invert today it still might be around a year for the equity market to peak – implying the current market downturn is still just a correction rather than the start of an ugly bear market.

Other economic indicators, meanwhile, are still yet to flash significant recession warnings.

Jobless claims, for example, remains relatively low – and are yet to break higher in a way evident prior to past recent recessions. 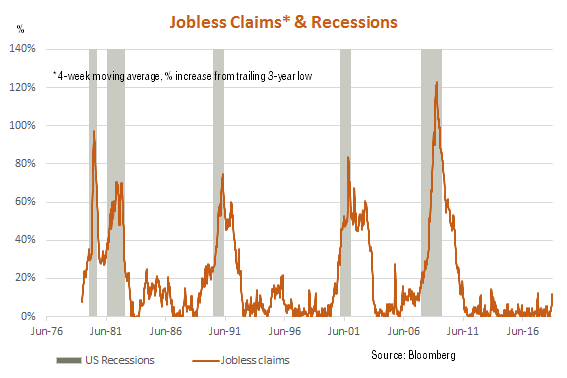 The US Conference Board Leading Economic Indicator is also still moving higher, and yet to deteriorate in a way seen prior to past recessions. 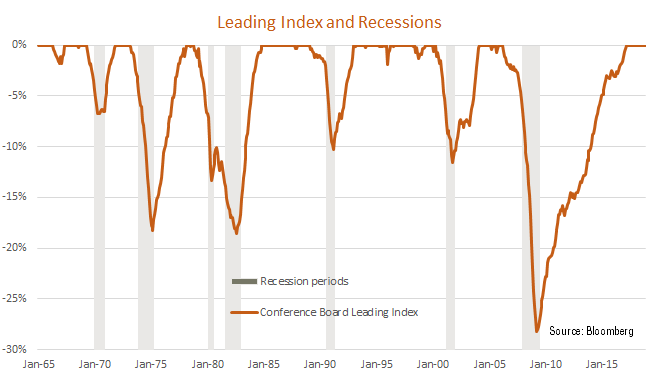 A final point to note is that even if the flat US yield curve is indicative of restrictive monetary conditions – i.e. the “neutral” real Fed funds rates has fallen over time such that today’s rate is already curtailing economic growth – the Fed could and likely would adjust policy if need be.  Indeed, the Fed has recently hinted that it could pause its rate hike schedule after the widely expected fourth rate hike next week.

At the end of the day, however, what matters is inflation – if it turns out that US price and/or wage inflation spikes higher in coming months, the Fed would have little choice but to continue raising rates so as to slow the economy.  That would likely imply the end of the long post-GFC bull market.  But if inflation remains contained, and the Fed pauses for an extended period, there’s a very good chance the US economy enjoys only a moderate growth slowdown next year back towards a more sustainable trend pace.  In turn, that would bode well for an eventual rebound in equity markets – especially if the US and China manage to settle their trade differences in the new year.

*Real rate is based on deflating the nominal funds rate by the 5-year moving average of annual growth of the core (excluding food and energy) private consumption deflator or “PCE”.