Global equities rebounded strongly last week, reflecting ongoing hopes of a US interest rate cut and signs that US trade tensions with Mexico at least would soon be resolved.  And sure enough, Trump suspended planned tariffs on Mexico overnight following an apparent agreement to tackle illegal immigration.  Sadly, the situation with Trump’s bigger sparring partner, China, remains unresolved.  Trump yesterday threatened new tariffs if a deal with China could not be worked out at the June 28-29 G-20 meeting, though as yet President Xi Jinping hasn’t even confirmed if he’ll bother to attend.

But fear not – the big story right now is not the trade war, but the Fed’s likely reaction to it – with even Fed chair Powell recently hinting he’s open to an interest rate cut if need be.  In a classic case of “bad news is good news”, Friday’s weaker than expected employment report saw stocks lift on heightened rate cut hopes.

In what appears a rogue result (given ongoing strength in other labour indicators) US employment grew by only 75K in May, or around 100K less than the market expected.  The unemployment rate, however, held steady at a 49-year low of 3.6%. Despite that, wage growth remained reassuringly benign, with annual growth in average hourly earnings edging down to 3.1% from 3.2%.

A salivating market has now fully priced a US rate cut as early as July – which still to me seems unwarranted given ongoing underlying strength in the economy. That said, the Fed could disagree and seems much more market sensitive than last  year!  As evident in the table above, US rate cut hopes helped weaken the $US and lowered US bond yields further, while gold continued to make progress.

We’ll get more data on US retail sales and industrial production this week – and after weak results for both last month, another round of soft results will likely only heighten rate cut expectations.  Perversely, it may again be a case of bad news is good news!

Of interest will be if the data ever becomes weak enough to create a market tipping point – where recession fears begin to outweigh rate cut hopes.  To my mind, talk of US recession anytime soon still seems fanciful.

The RBA duly cut rates last week as widely expected, with the soggy GDP numbers one day later easily justifying the move.  Q1 GDP grew only 0.4% and 1.8% over the year, with broad based weakness in private demand (consumption, housing construction and even business investment).  Thankfully, exports and public demand provided timely support.  What’s concerning, however, is that the outlook for consumer spending and housing remain soft, while business investment also appears increasingly fragile (despite what currently appear reasonable investment intentions for the coming financial year).

Critical new updates on the economy’s health will come from the NAB business survey and labour market report this week. The NAB survey weakened notably last month, especially hiring intentions, and it will be interesting to see if growing rate cut expectations did much to lift sentiment in the May survey due out today.

As for the labour market, forward indicators suggest employment growth should soon start to slow in earnest, and I predict only a modest 10k gain in employment (market +16k), with the unemployment rate edging back to 5.1% (market 5.1%) from last month’s jump to 5.2%.

To my mind, barring a drop back in the unemployment rate to 5% or less on Thursday, the RBA should have enough further evidence of labour market “spare capacity” to justify another rate cut in July. 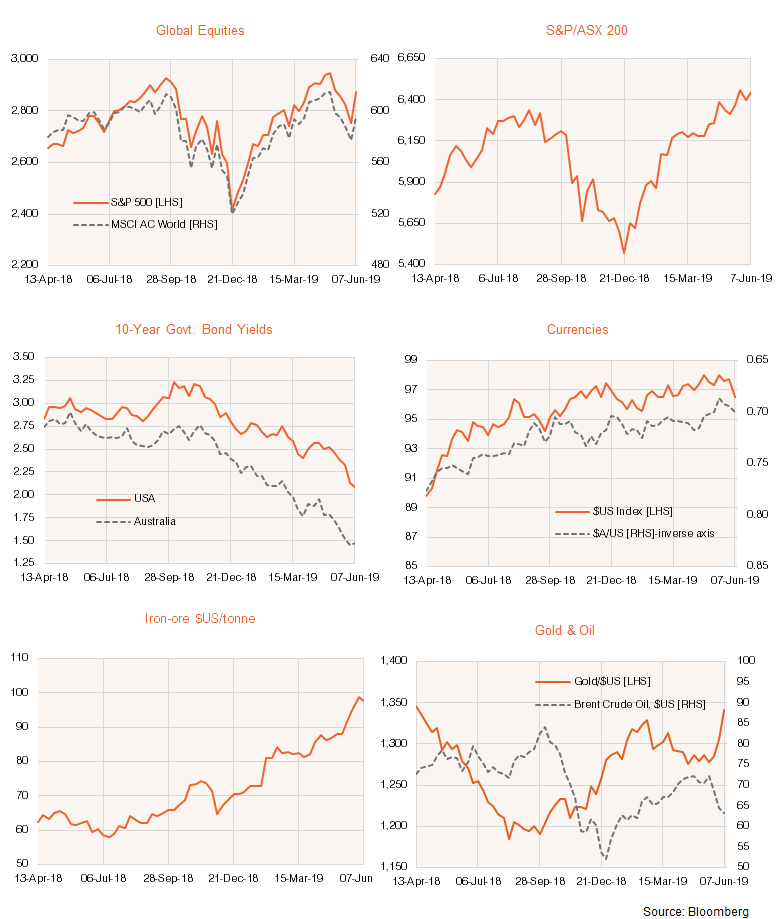