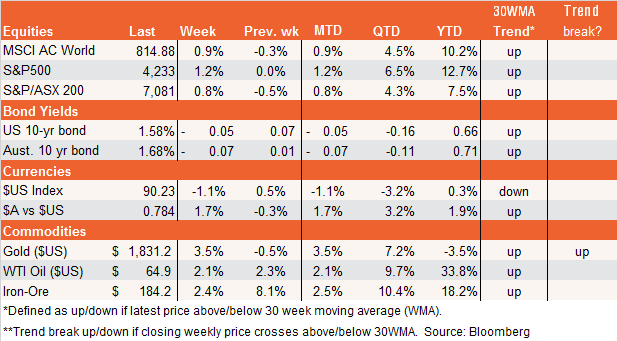 It was a case of ‘bad news is good news’ again in global markets last week, with equities enjoying a boost from weaker than expected U.S. economic data which appeared to reduce the risk of high inflation and interest rates any time soon. The first soft data point earlier in the week was the ISM U.S. manufacturing index which fell back a little more than expected in April, to a (still strong) 60.7 from blisteringly strong 64.7 in March.

But the major highlight was the much softer than expected April growth in U.S. employment of only 266k (versus market expectation of +678k), with various explanations being suggested – ranging from simple statistical volatility/rogue number, to reduced worker desire to take on jobs due to lingering school/transport restrictions and/or higher unemployment benefits. What few contest, however, is that employment demand is clearly very strong – which, contrary to last week’s market reaction, is actually potentially bearish if it means we might get an earlier than anticipated uptick in wage growth to lure more into the workforce.

All that said, following recent moves by the Bank of Canada it seems we’re slowly but surely inching closer to wider global ‘taper talk’ – which could eventually cause equities to endure at least a mini-tantrum. While most Fed speakers last week continued to trot out the line that there’s no need to even think of tightening anytime soon, Robert Kaplan, president of the Federal Reserve Bank of Dallas, was a notable exception who said he’d prefer to start talking about tapering bond purchases sooner rather than later.

And while the Bank of England kept its year-end bond holdings target unchanged at £895 billion, this nonetheless implies some tapering in weekly bond purchases in the months ahead (lest it reach its target months ahead of schedule), and a complete end to UK bond buying by year-end. The outgoing BOE Chief Economist, meanwhile, dissented in last week’s policy meeting by advocating a reduced bond buying target.

The recent easing back in bond yields and the $US has helped boost gold prices of late, which last week broke above their 30-week moving average. 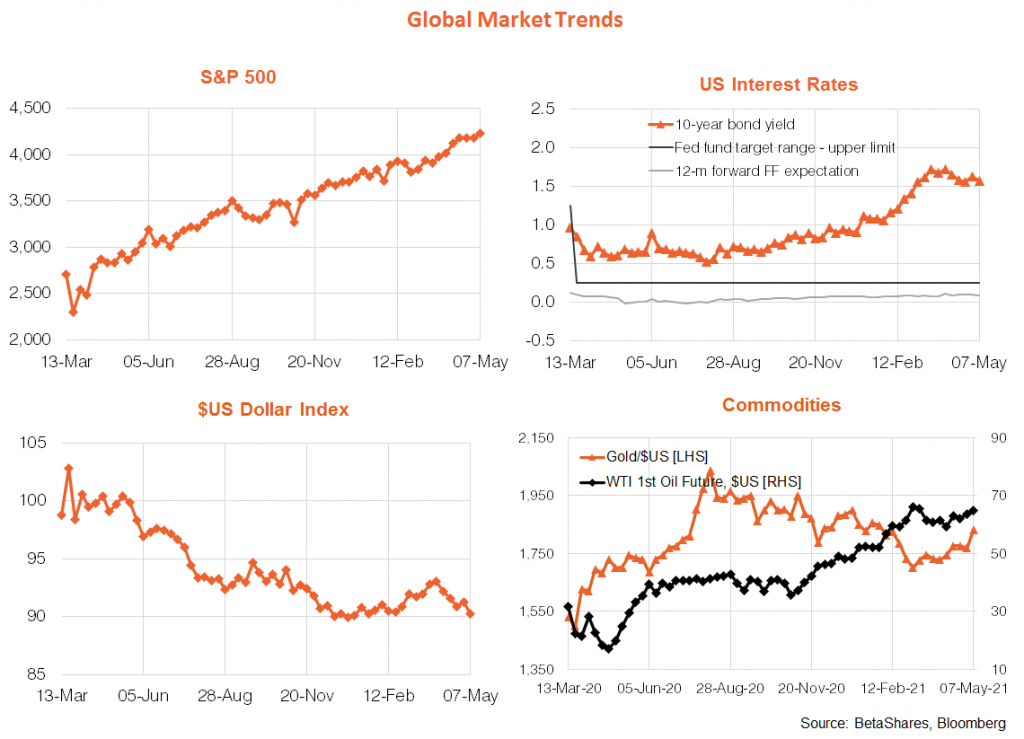 A key focus this week will be April U.S. consumer prices. After a modestly larger than expected 0.3% gain in the March core CPI (i.e. excluding food and energy), another reasonably elevated 0.3% gain is expected in April – with the annual rate also jumping from 1.6% to 2.3% aided by COVID-related price declines this time last year. One would imagine such an outcome is now priced in by the market, but we’ll have to wait and see. Of course, any upside price surprise would likely be negative for nervous bond and equity traders alike. All that said, I still anticipate pricing pressure to ease later this year, such that annual growth in the core CPI will still be comfortably below 2% by Christmas.

Value and the safety of developed markets were the themes last week, with emerging market relative performance stumbling after recent consolidation, while ‘value’ notably outperformed ‘growth’, despite an easing in bond yields. 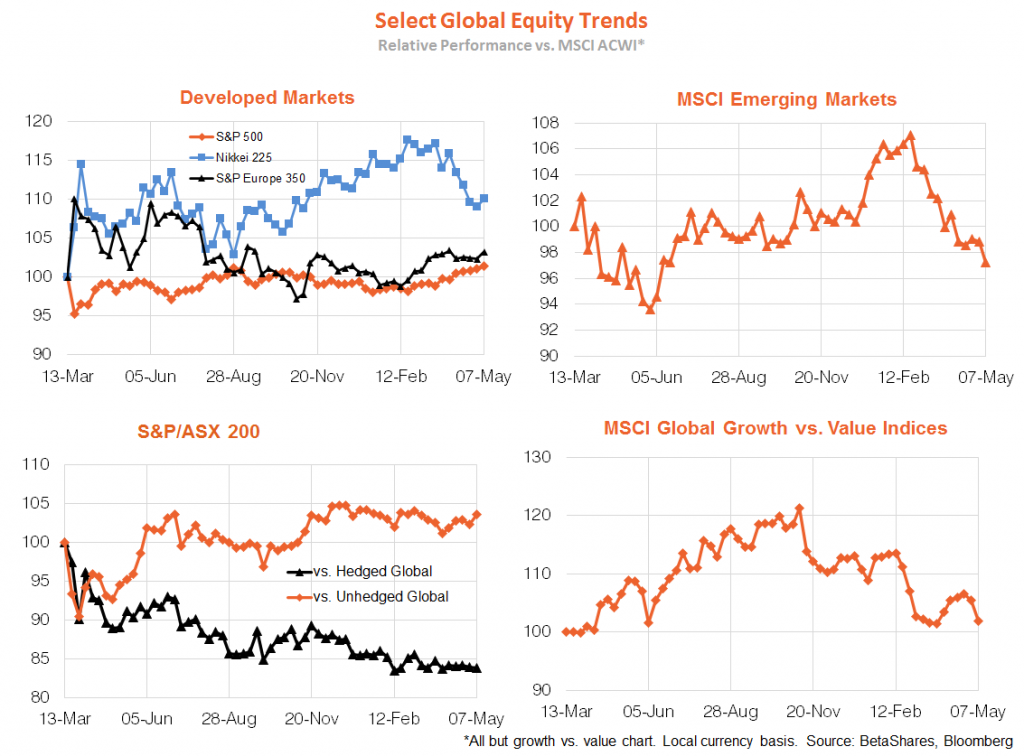 Lingering COVID challenges aside, the Australian economy is clearly enjoying a purple patch – with a strong rebound in growth, and fiscal and monetary policy hell bent on pushing capacity to its limits.

Indeed, we heard a lot from the RBA last week, though nothing that was particularly surprising. As widely anticipated, the RBA notably upgraded its economic growth outlook, with the unemployment rate now expected to end the year at 5%, compared with its 6% expectation back in February. By June 2023, the RBA expects the rate will have dropped to 4.5% (5.25% previous expectation), though as this is likely still at the top end of the RBA’s ‘full employment’ estimate, it still only expects modest upward pressure in prices and wages by then. Indeed, it still expects underlying annual consumer price inflation to only creep back to the lower edge of its 2 to 3% inflation target band by early 2023. The RBA is in no mood to talk about tightening, at least not before the Fed does.

Meanwhile, we should expect a big-spending Federal Budget tomorrow, even as the stronger economy and high iron-ore prices allow for a moderate reduction in budget deficit projections. Aged care and child care subsidies are expected to receive a major boost, which is at least a great windfall for the myriad of private operators across the country – though whether it improves services or lowers prices in either area remains to be seen!

In terms of markets, the correction in technology’s relative performance has accelerated in recent weeks, with resources – and to an extent financials – holding up well. The $A remains remarkably contained despite the ongoing strength in iron-ore prices. 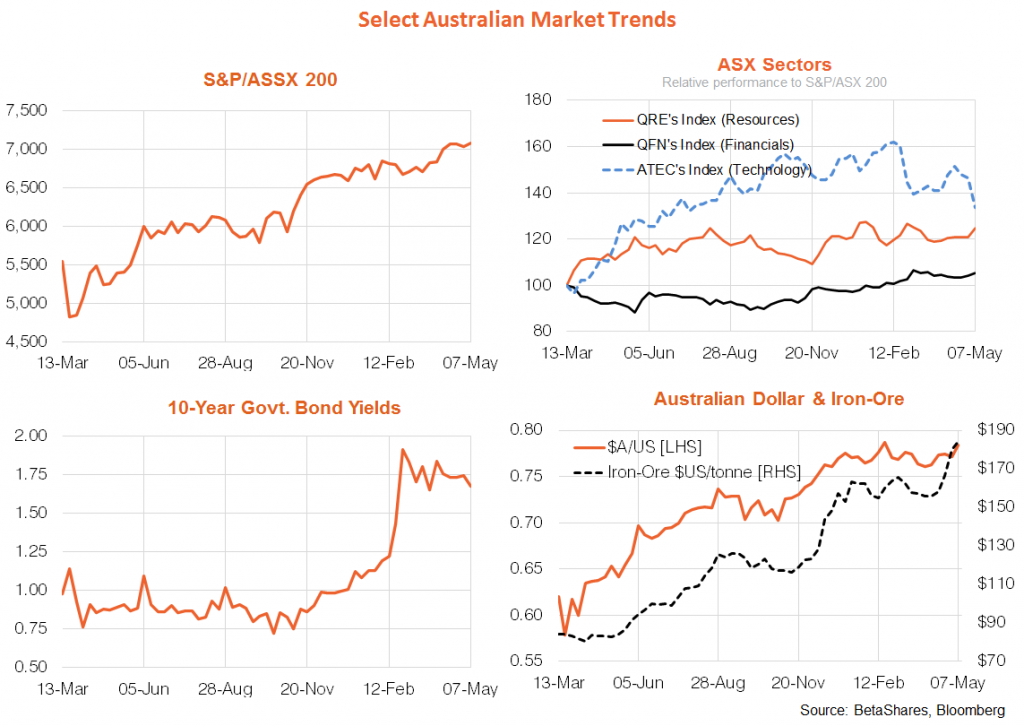