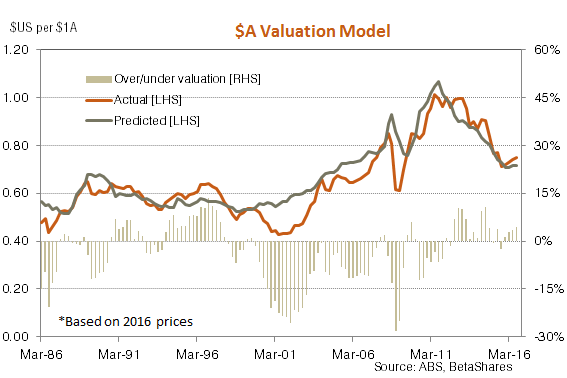 Given the Reserve Bank of Australia’s demonstrated concern over economic growth, we now expect the Bank to cut the official cash rate to 1.5% p.a. by late 2015. The next interest rate cut seems likely next month.   Together with our view that the United States Federal Reserve will begin raising interest rates by mid-2015 – and ongoing likely weakness in  commodity prices – we now see the $A falling to US68c by year-end.

In its February Statement on Monetary Policy released last week, the RBA downgraded its economic growth forecasts largely because of a delay in the expected recovery in non-mining investment. In turn, the RBA’s pessimism stemmed from an only modest upgrade to non-mining investment expectations in the September quarter Australian Bureau of Statistics capital expenditure (Capex) survey, and a lack of improvement in survey measures of business conditions and capacity utilisation during the December quarter.

Our expectation is that these lead indicators of non-mining business investment will again fail  to show much improvement over the next few quarters, which suggests the RBA may well need to cut its economic growth outlook again and slash interest rates further. Indeed, the jump in the unemployment rate to 6.4% in January adds further pressure on the RBA, and there’s now a very real risk this rate could lift to 7% by year-end.

The stubborn weakness of non-mining investment – despite low interest rates and a cheaper Australian dollar – seems to reflect several structural headwinds, many of which have already been flagged by the RBA[1].  These include a milder than usual investment downturn during the GFC period, a shift in activity toward less capital intensive service sectors, greater consumer caution, and an apparent lengthening in the average lifespan of capital equipment.  We would add that due to lags and high capital costs, manufacturing sector investment seems unlikely to rebound strongly given recent exchange rate weakness, with significant sector restructuring as a result of past exchange rate strength still underway.  A recovery in demand for new commercial property is also being hampered by still high office vacancy rates and the trend toward online sales.

Meanwhile, the recovery in the United States economy continues to gather steam, with 257,000 new jobs created in January.  Our long-held view has been that the US Federal Reserve could start to raise interest rates by as early as April, and is unlikely to wait past July. At the same time, the iron ore prices outlook remains weak, with demand from Chinese steel producers still under pressure and high-cost Chinese iron ore miners not yet willing to significantly cut their own supply.  As very low cost producers, Australia’s major iron ore miners are also unlikely to cut back supply anytime soon.

At US 77c, the $A has already fallen a long way in recent months. But in real terms, the $A still remains high relative to its long-run average (US66c) and relative to the decline in commodity prices.  Accordingly, we see scope for the $A to fall to at least US68c over the coming year.