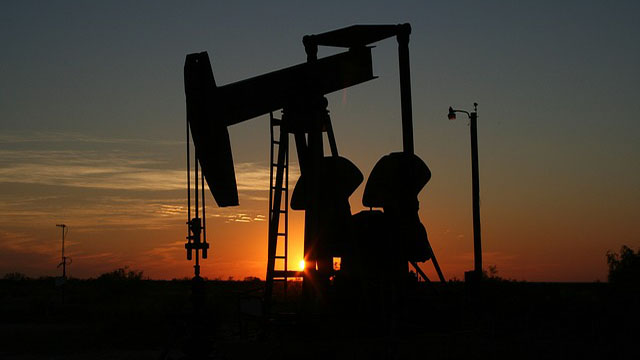 The sharp decline in oil prices in recent months has been a major surprise for financial markets, with some suggesting it reflects speculation run wild.  This note suggests the contrary – and that the decline in prices clearly reflects the development of a short-term fundamental imbalance between supply and demand – and consequent run up in oil inventories.  With oil prices now low by historic standards, and restoration of better balanced supply and demand conditions likely in coming months, there’s a good chance we’ve already seen the bottom in oil prices – which is consistent with the moderate rebound in prices already evident in recent weeks.

A positive supply side shock 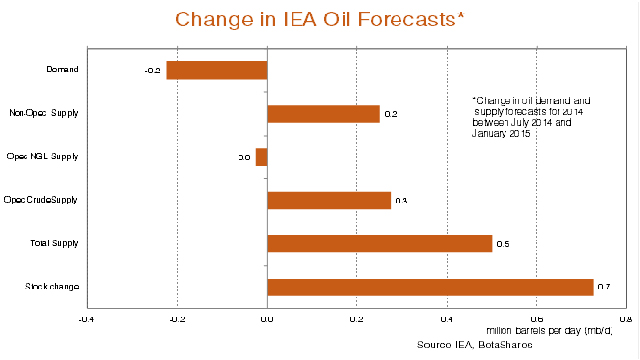 Rather than speculation, the oil price decline appears to reflect fundamentals. One way to measure this is to examine changes in oil supply and demand forecasts by the respected International Energy Agency (IEA).  As seen in the chart above, over the past six months the IEA has revised down expected oil demand over 2014 by 0.2 million barrels per day (mb/d) – largely due to weakness in Asia and Europe.  Over the same period, the IEA revised up expected oil supply by a far larger 0.5 mb/d, reflecting production increases by both non-Opec and Opec economies. Note, moreover, it’s not just US shale oil that has boosted supply – Opec’s inability to keep within its own annual production target of 30mb/d has also been a factor.

The net effect of higher supply and weaker demand is that the IEA revised up the expected growth in global oil stocks this year by 0.7 mb/d – from 0.1 mb/d to 0.8 mb/d.  Reflecting this run-up, the IEA estimates the gap between developed county oil inventories and their 5-year average level ended last year at the highest since August 2010.

All up, therefore, the slump in prices in recent months appears to reflect a larger than expected run up in supply, and smaller than expected lift in demand – resulting in relatively high overhang of oil inventories.

As seen in the chart below, moreover, the percentage slide in prices over recent months does not look that unusual compared to past major oil price retreats.  The oil market seems to be one in which prices (generally) rise by the stairs, and go down via the elevator!

Ample oil inventories seem likely to keep prices soggy for at least a few more months. The IEA’s latest Oil Market Report projected further stock builds over the first half of this year – at average annual rates of 1.2 mb/d and 1.6mb/d in the March and June quarters respectively.  For investors, the question now is the extent to which this inventory build has already been reflected in prices.

Further out, however, the IEA anticipates a leveling out in oil stocks – and a better balanced market – over the second half of 2015, due to both a lift in demand and further cutbacks in non-Opec supply.  Indeed, while US shale oil producers are likely to continue to deplete currently operating wells at current oil prices, their willingness to invest in new wells would be severely curtailed.  Recent industry reports suggest the United States oil rig count, for example, has fallen by 29% from peak levels reached in October last year – to be now at the lowest level since December 2011[1]. 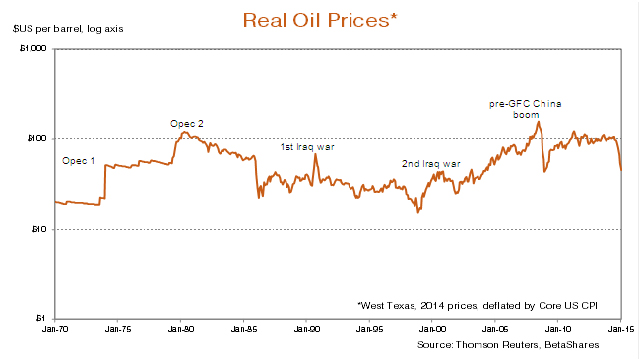 From a long-run perspective, moreover, at around US$50 a barrel, global prices are now close to their long-run average (in inflation adjusted terms) of US$54 since the early 1970s. Indeed, in real terms prices have already touched the lows of the global financial crisis, though are still above the 1998 bottom of around US$15.

How to play a possible oil rebound

The traditional way Australian investors sought exposure to oil prices trends has been through investing in energy related stocks, such as Woodside Petroleum.  Since late 2011, however, there’s been an even purer way to get oil price exposure – via the BetaShares Crude Oil Index ETF -Currrency Hedged (synthetic) (ASX Code OOO). This is a currency hedged ETF that aims to track the performance of the S&P GSCI Crude Oil Index, which provides exposure to the front-month West Texas oil futures contract.

As seen in the chart below, since its launch in November 2011 to February 2015, the BetaShares crude oil ETF has tracked the West Texas $US spot oil price quite closely (correlation 96%). By contrast, the correlation between Woodside Petroleum’s share price and that of West Texas oil has only been 23% over this period. 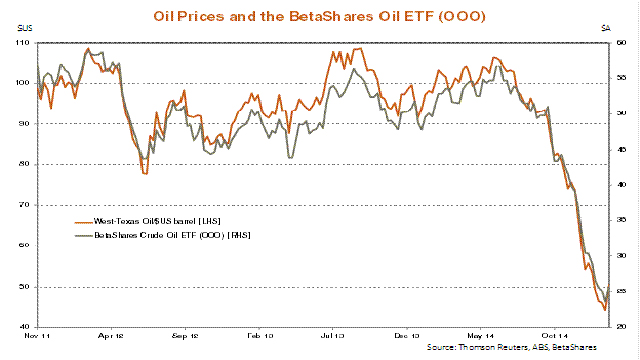