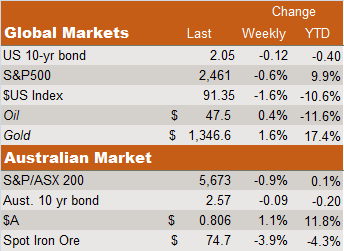 Concerns over North Korea and storms battering America’s south were enough to see risk aversion creep back into global markets last week, with the S&P 500 Index shedding 0.6%. So far at least, however, global equities are at worst only broadly consolidating just below recent highs. The $US and US 10-year bond yields also weakened but, unlike equities, both broke below important recent support levels last week, affirming current downtrends remain in place. Reflecting its safe-haven status, gold bounced a further 1.6%.

After appearing to “blink” a few weeks ago, the resumption of North Korean missile and bomb tests last weekend unnerved markets, with no side as yet showing signs of wanting to back down. Just what US President Trump can and will do (apart from waging a twitter war) remains to be seen. While the US would likely easily and quickly win a conventional “war”, this might not avoid immediate retaliatory devastation of South Korea or far worse.

In other key news, with hurricanes bearing down, Washington did agree to a debt ceiling extension, thereby postponing the risk of a Government shut down until early December. Worried about Euro currency strength, the European Central Bank also continued to dither – postponing until next month a widely expected announcement to reduce its monthly bond purchases by early 2018. This only short delay, along with only muted ECB jawboning against currency strength, ironically saw the Euro spike even higher!

Key global data next week includes US consumer price inflation (Thursday) and retail sales (Friday). China also releases its key monthly data covering retail sales and industrial production on Thursday. But with US government shut down risks averted in the near-term, focus will likely be on the extent of devastation from Hurricane Irma bearing down on Florida and any further developments regarding North Korea.

The key local highlight last week was the relatively uninspiring June quarter GDP result – which revealed an only modest rebound in economic growth to 0.8% after a weak 0.3% gain in the March quarter. While a bounce in (lumpy) public construction supported growth, of concern was the weakness in household incomes and the fact recent strength in consumer spending has been heavily reliant on a (potentially unsustainable) rundown in saving.

Home building also appears to be weakening more quickly than anticipated. That said, the Reserve Bank left rates on hold and sounded slightly more upbeat on the outlook – no doubt reflecting the lift in business investment intentions in the CAPEX survey from the previous week.

Despite a pull back in iron ore prices, $US weakness and a bullish RBA saw the $A firm – which is now more confidently holding the $80c level. This will not be helpful for either the growth or inflation outlook, but there seems little the RBA can do about it now.