To paraphrase former PM Paul Keating, last week produced a fairly consistent set of “beautiful numbers” across the global economy.  Key manufacturing indices in both the US and China were better than expected and suggest tentative signs of recovery due to easing trade tensions, the Fed’s dovish tilt and renewed Chinese stimulus. Service sector activity in both economies also remained at robust levels. And while US retail spending was softer than expected in February, this was more than offset by a solid upward revision to January’s report.

Of course, the most beautiful set of numbers came in the US payrolls report, with better than expected employment growth and softer than feared wage growth.  At the same time, weekly US jobless claims hit a 49-year low!  Not surprisingly, global equities pushed higher (the S&P 500 is now only 1.3% below its closing daily high on 20 September), and technically moved into an uptrend based on my (albeit simple) moving average rules indicated in the table above.  Bond yields also popped higher after steep falls in recent weeks.

That said, there were a few negative surprises, with weakness in February German factory orders and Japan’s March quarter Tankan business sentiment survey.  This either suggests some lags before the improving outlook in China and the US filters through to Europe and Japan, or perhaps even some corporate fears of “trade diversion” if China tilts toward US products to appease President Trump.

In Australia, strong commodity prices boosted the Federal Budget bottom line as expected, with a modest surplus now expected in 2019-20.  And while there were the expected tax cuts and cash handouts, the size and timing of the stimulus does not appear strong enough to completely rule out RBA rate cuts later this year. Indeed, the final sentence of the RBA’s post-meeting policy statement last week contained an interesting tweak that got aficionados like me excited.  Whereas previously it indicated its decision to hold rates steady at the meeting was “consistent with sustainable growth in the economy and achieving the inflation target over time” – this time it merely said it had decided to hold rates steady.  It then promised to “continue to monitor developments”.

That said, were the RBA getting an itchy finger, global and local economic data last week may now have given it some pause. Locally, for example, the NAB business conditions index strengthened a bit further in March – suggesting some stabilisation around long-run average levels after steep falls late last year.  And even retail sales enjoyed a flash of strength in February after several months of worrying weakness.  My view remains that while the RBA will likely cut rates this year, it’s likely to be later rather the sooner – and will most likely require clearer signs of labour market weakness.

Markets continued their “waiting for Godot” like resolution to US-China trade talks, but remain ever hopeful.  Data wise, key highlights will be the US CPI, which is likely to show inflation remains benign, and an updated IMF Economic Outlook on Wednesday.  As is often the case given the long lead times in its production, the IMF report could be downbeat just as fainter glimmers of hope in global data are starting to appear.

In Australia, ANZ Job Ads today should continue to suggest a slow waning in labour market strength is underway, while housing finance on Wednesday might suggests that while investors continue to flee the market, owner occupiers are starting to hang around for potential bargain first homes or upgrades. Also of note this week is the RBA Financial Stability Review on Friday, which will provide insights into the degree of credit tightness and the impact this may be having on loan defaults and bank balance sheets.  Also watch out for any stronger hints with regard to RBA easing intentions in a speech from Deputy Governor Guy Debelle on Wednesday. 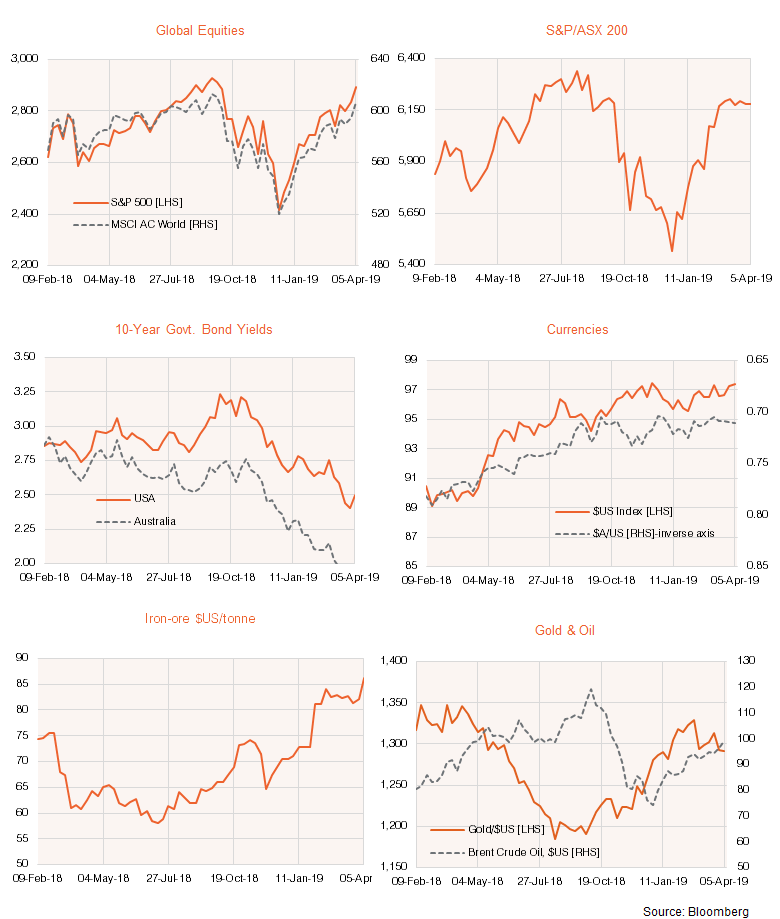