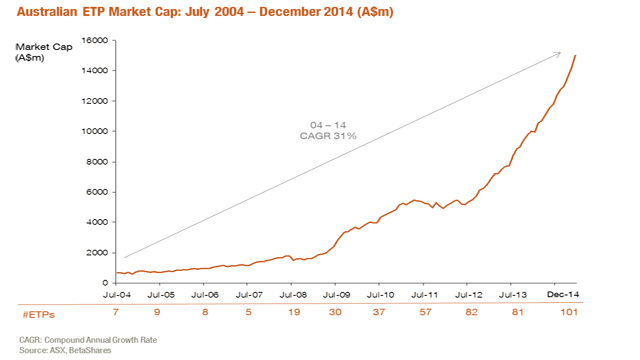 In a hallmark year, the Australian exchange traded fund (ETF) market saw a number of key metrics reach record levels in 2014. The industry recorded its highest ever annual growth in 2014, with funds under management increasing by $5 billion (up 50% on 2013) to end the year at a new record high of $15 billion. Records were also broken for net inflows and trading value. Highlights of our Year End Review for 2014 are set out below:

Comment: This level of growth is nothing short of extraordinary, capping off a massive year for the industry. To put this level of growth into context, the previous record (from 2013) was $3.5B of growth. Perhaps most strikingly of all, the vast majority of the growth for the year (86%) came from net inflows in a year where stock market conditions were mixed across locations.

Comment: We consider 12 new products over the course of the year to be a relatively slow pace, and expect this number to be significantly higher at end 2015

Comment: Products providing exposure to developed market international equities, particularly the US were by far the largest beneficiary of inflows, attracting ~$1.4B of inflows;~$720m of new money flowed into Australian high yield equity products – exemplifying the continued desire of investors for income, particularly as capital growth stalled in 2014; ~$370m of new money flowed into the Australian High Interest Cash ETF – with investors balancing their riskier allocations with the stability of cash.

Comment: Outflows were generally very low, and essentially restricted to commodities (-$43m for the year) and, in particular unhedged gold –as gold continued to be eschewed by investors.