It was yet another positive week for global stocks, with the S&P 500 reaching new record highs.  Ongoing optimism with regard to US-China trade talks, a good US earnings reporting season, and signs of stabilisation in global manufacturing were all contributing factors.  Even the Fed’s decision to signal a potential end to the rate cut cycle was not enough to dent stocks – partly because the market simply doesn’t believe it.

As regards the trade talks, early indications are that the Chinese are offering to buy up more agricultural products in exchange for the US dropping recent tariff increases.  If that’s all that is agreed, it will be a clear sign that Trump has caved due to concerns about the economy.  That said, Trump would nonetheless trumpet it as the greatest trade deal in history, and his media and heartland voters will no doubt agree. For markets, what’s important is that the growing negative impact of the trade tensions are alleviated sometime soon, and talk of future deals postponed until after the November 2020 Presidential election.  If Trump can refrain from threatening China again between now and then, there’s a good chance that global economic indicators can improve as we head into next year, and in turn revive corporate earnings and push equity prices even higher.

The other great news is that, so far at least, US inflation pressures remain extraordinarily benign, and US corporate earnings seem to be only going through a soft patch, akin to what was seen over 2015 and 2016.  Last week’s data remained supportive: US job growth was solid in October, with little acceleration in wage pressure, while the Markit manufacturing index edged higher.

In other news, the UK is finally heading to another election on December 12. It seems likely that Boris Johnson’s Conservatives will beat out Labor, though probably fail to get an outright majority.  Ultimately, however, it seems increasingly likely that Johnson’s latest deal with the EU (which effectively leaves Northern Ireland in the EU customs area for an indefinite period) should pass a newly formed but still begrudging Parliament early next year.

There is little major global data this week, with a focus likely to remain on the tail end of the US earnings reporting season and US-China trade rumours.

There was mixed news on the economy last week, with a bounce in home building approvals and further strength in house prices, offset by another relatively subdued CPI report. Although notoriously volatile home building approvals rose 7.6% in September, this followed three monthly declines in a row, and it’s premature to conclude their trend decline is over.  Lower interest rates, however, have clearly placed a rocket under east coast house prices again, with the Core-Logic measure suggesting Melbourne and Sydney prices rose 2.3% and 1.7% respectively in October.

Underlying inflation meanwhile, remained fairly weak in the June quarter, as widely expected.  All this is consistent with the RBA easing policy further in coming months, though not at this week’s Board meeting.  A steady RBA and growing global optimism could see the $A firm somewhat more in the short-term, though iron-ore prices have retraced notably in recent weeks.

Apart from Tuesday’s RBA meeting (which should be a non-event), retail sales due out today will likely remain subdued, though we may well see a decent lift in home lending approvals on Friday. The RBA’s Quarterly Statement on Monetary Policy is also due out Friday, which should reaffirm the Bank’s easing bias and it’s lingering hope that inflation should rise at some stage in the future.

The local stock market, however, still seems likely to ride the global wave higher if trade tensions are resolved – though a relatively subdued earnings outlook could see our market under perform. 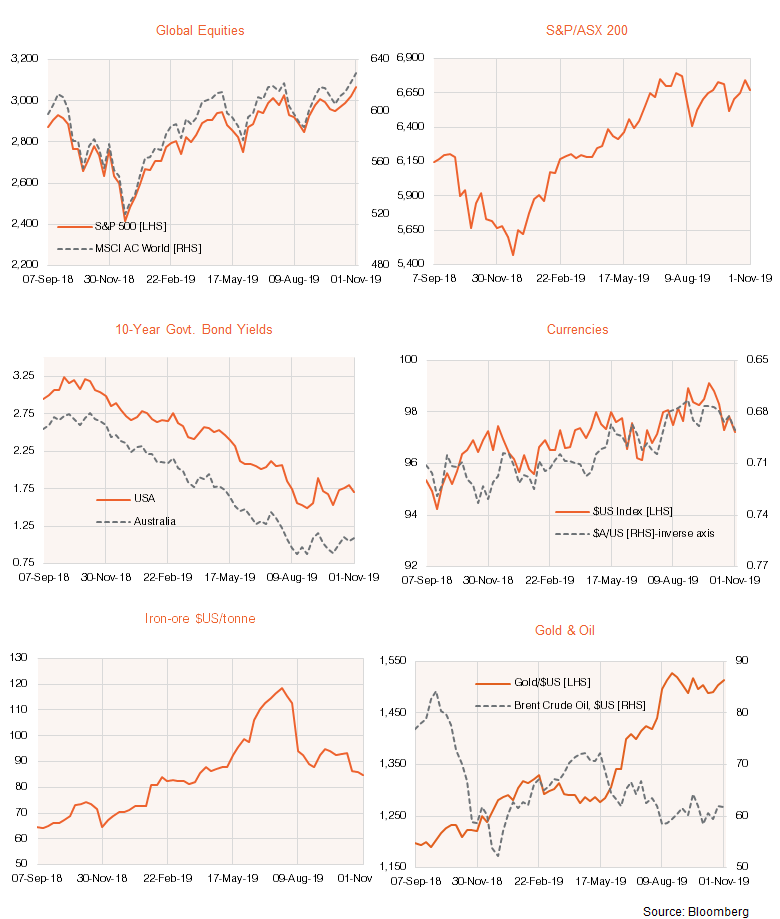