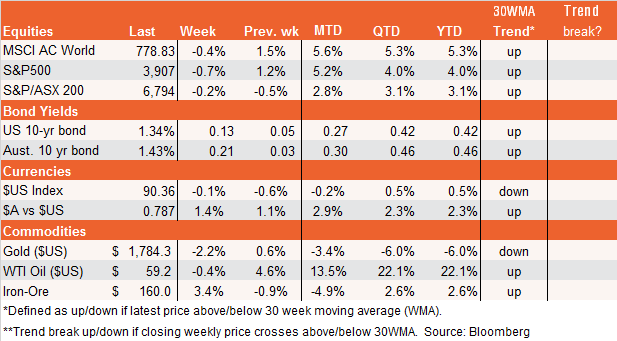 The rise and rise in global bond yields in recent weeks – on the back of rising raw material and wholesale price pressures – finally got noticed by hard-charging equity markets last week, though at this stage the yield impact is a glancing blow rather than a knockout punch.

U.S. 10-year bond yields pushed up a further 0.13% last week, reaching 1.34% – compared with 1.07% at the start of the month and a low of 0.55% in early August last year. After touching record highs early in the week, the S&P 500 only ended the week down 0.7%. Note the $US also edged lower, with its recent rebound appearing to falter -while oil pushed higher (helped by supply disruptions in freezing Texas) and gold continued to lose out to Bitcoin as the new ‘$US debasement’ trade. 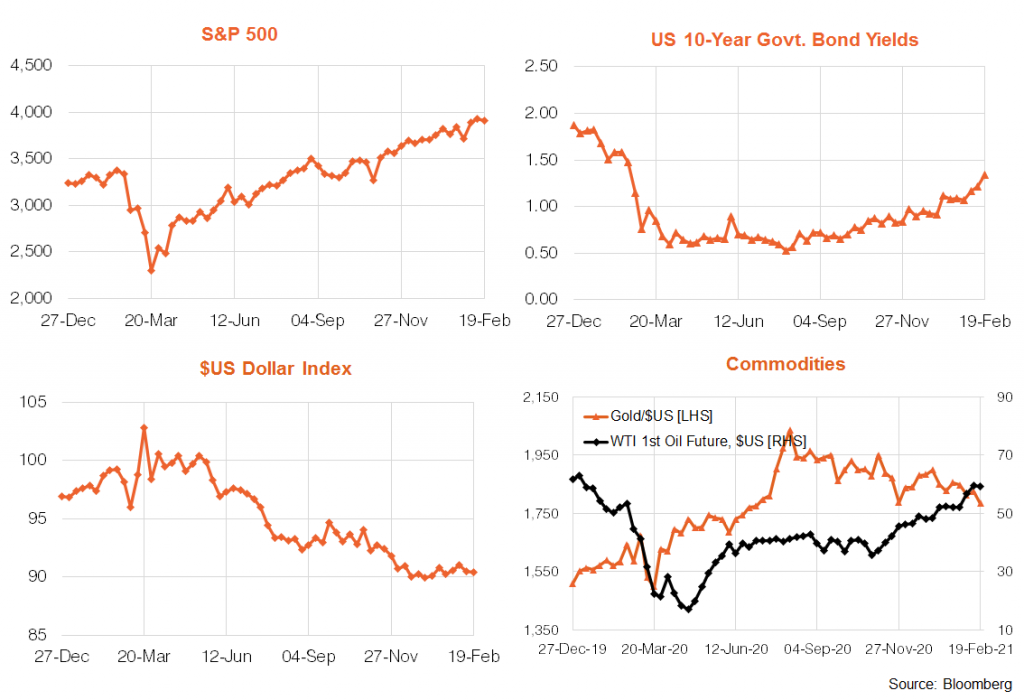 How far can bond yields rise? And how will equities react? So far at least, the lift in yields can be considered fairly orderly – spanning several months – and reflective of improving risk sentiment which has pushed yields only back to pre-COVID levels. The Fed still seems intent on not lifting rates for several years, and tapering of bond purchases is not likely until late this year at the earliest. Any sustained lift in consumer price inflation also seems unlikely until wage growth picks up, which will require a lot tighter labour market than at present (unemployment closer to 3.5% than 6.5%).

That said, as I noted last week, a short-run uptick in annual inflation appears a growing risk as last year’s slump in some prices washes out of the annual calculations (so called ‘base effects’) and given an evident lift in raw material/wholesale prices reflecting lingering supply bottlenecks. The U.S. economy is also roaring back and, while once potentially justifiable, the Biden $1.9 trillion stimulus now seems an unnecessary extravagance.

Indeed, U.S. producer prices surprised on the upside last week – with annual growth in the ‘core PPI’ (excluding food and energy) reaching 2%. As evident in the chart below, annual growth in the core price consumption expenditure deflator (PCE) – a key focus of the Fed – had already lifted from a recent low of 0.9% in April last year to 1.5% in December. In last week’s Fed minutes, moreover, the Fed’s staff even conceded this annual rate could temporarily poke above 2% over the next few months. If so, that could create sticker shock for both the equity and bond markets – despite likely Fed assurances that the rise will be only temporary. Indeed, as I’ve long noted, the U.S. core CPE has rarely been above 2% in annual terms in the past 25 years. While that seems unlikely to change, the Biden-fueled fiscal boost will test whether technology/globalisation – and low wage growth – will limit any demand-led inflation pressures this year.

In terms of the week ahead, a smattering of U.S. economic data will likely confirm the economy is powering back this quarter. In this regard, one highlight given the current inflation angst will be the January PCE, though the market currently anticipates the annual rate will edge down to 1.4% rather than accelerate. Any upside shock could upset markets. 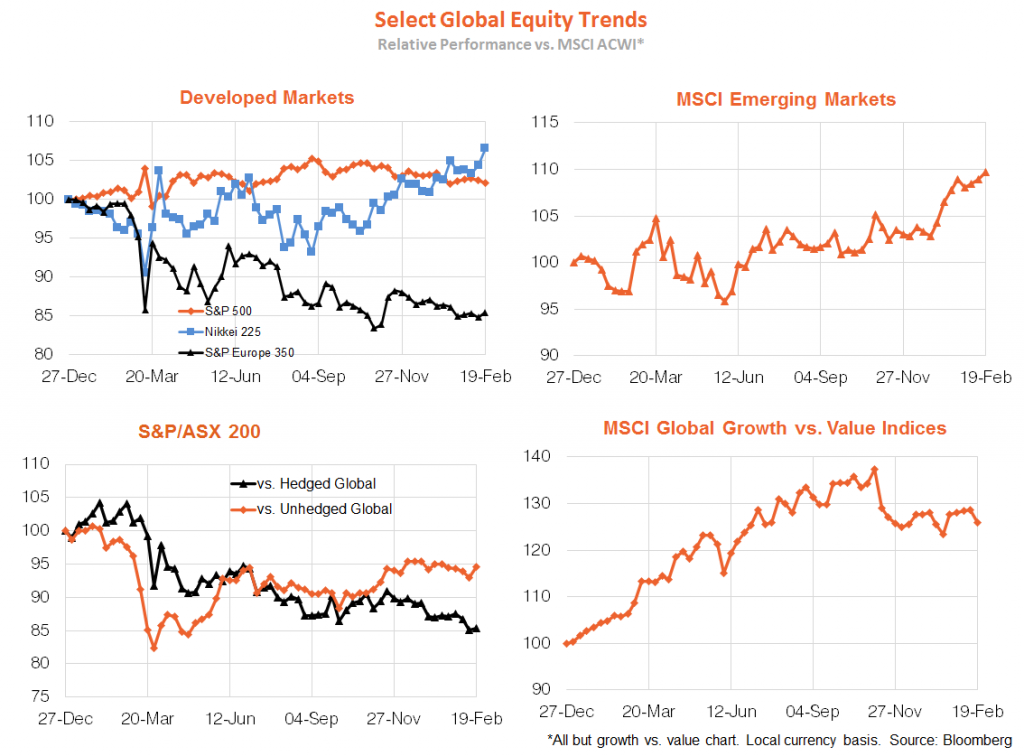 Local stocks also sagged a bit last week, though not as much as those on Wall Street – with local bond yields rising even more sharply. Economic data continues to remain encouraging, with another solid lift in employment during January – meaning it’s now all but recovered to pre-COVID levels. A strong earnings reporting season is also buoying sentiment. Iron-ore prices continued to rise, pushing the $A ever closer to US 80c.

This week we get more Q4 GDP building blocks in the form of construction and capital spending data. Both should confirm a decent rebound over Q4, with business investment spending plans also likely to be upgraded given the strong apparent lift in business confidence in recent months. We also start our own vaccine rollout!

The only spoiler here is any further lift in bond yields.