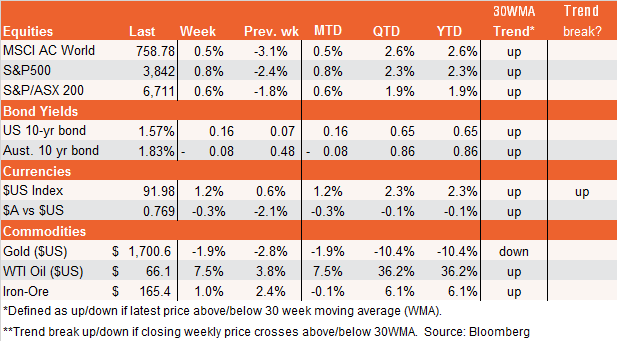 Global equities managed to end last week in positive territory, despite a further lift in bond yields.  Although markets were initially disappointed that Fed chair Powell did not promise to do more to stem the rise in yields, investors finally concluded after the solid US payrolls report that good news was good news after all.

Indeed, as I suggested last week, US payrolls surprised on the upside on Friday, with a 379k gain in jobs (market +200k) and drop in the unemployment rate from 6.3% to 6.2%.  The U.S. Senate also passed Biden’s $US1.9 trillion stimulus bill on Saturday, and it should pass the House on Tuesday. Of interest is whether nervous equity investors view this as good news also, or bad news to the extent it helps push up bond yields.

Adding to the nervousness, OPEC agreed not to increase production last week, which saw oil prices push higher. For what it’s worth, however, last week’s Beige Book report on the U.S. economy only hinted at modest inflationary pressure. While input costs for many businesses had increased (such as fuel, steel and lumber), and some had found success in passing this through to consumer prices, “many others were unable to raise prices”.

As seen in the chart below, so far at least the pull back in equity prices has been fairly modest despite the almost parabolic move higher in bond yields in recent weeks. Also notable is the apparent bottoming in the US dollar, which could reflect a safe haven element and/or the growing attractiveness of U.S. bonds and strongly performing economy. Despite all the inflation talk, moreover, gold still has few friends. 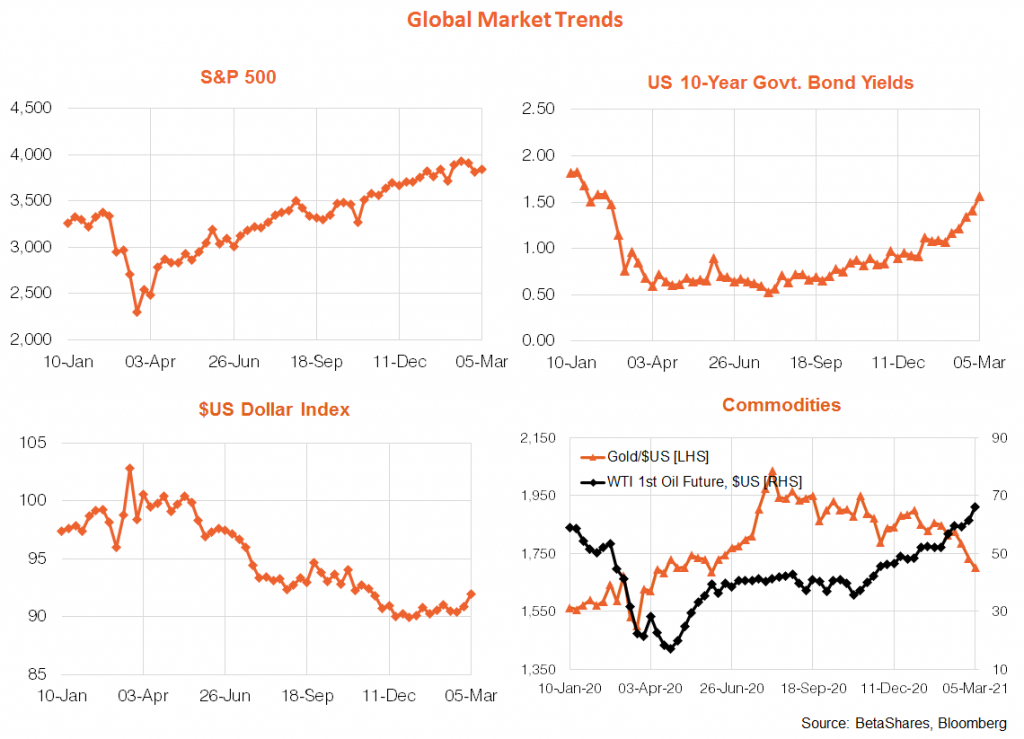 Apart from Biden’s package likely clearing the House, the market will also nervously await the US February consumer price index (CPI) report on Wednesday. While core annual inflation is expected to remain steady at 1.4%, any upside surprise could generate an outsized market reaction.

The real challenge, however, is potentially over the following three months due to very weak CPI results during the lockdowns last year over March to May (core CPI prices were flat in March 2020 and fell by 0.4% and 0.1% in April and May last year). That means even small 0.1% monthly gains in the core CPI over the next few months, for example, would push annual core inflation to 2.2% by May. Thereafter, however, annual underlying inflation should likely drop back below 2% by July assuming no notable lift in the underlying trend in monthly gains – which ultimately is the real question markets face!

Also of interest this week will be how well absorbed the 10-year and 30-year U.S. Treasury bond auctions on Wednesday and Thursday respectively prove to be, given that the poorly performing 7-year auction a few weeks back helped trigger the latest surge in yields.

In terms of global equity trends, last week saw another notable win for “value” over “growth”, through shifts in relative regional performance were relatively subdued. Local stocks and Europe have displayed some outperformance in recent weeks, while Japan and emerging markets have retreated somewhat. 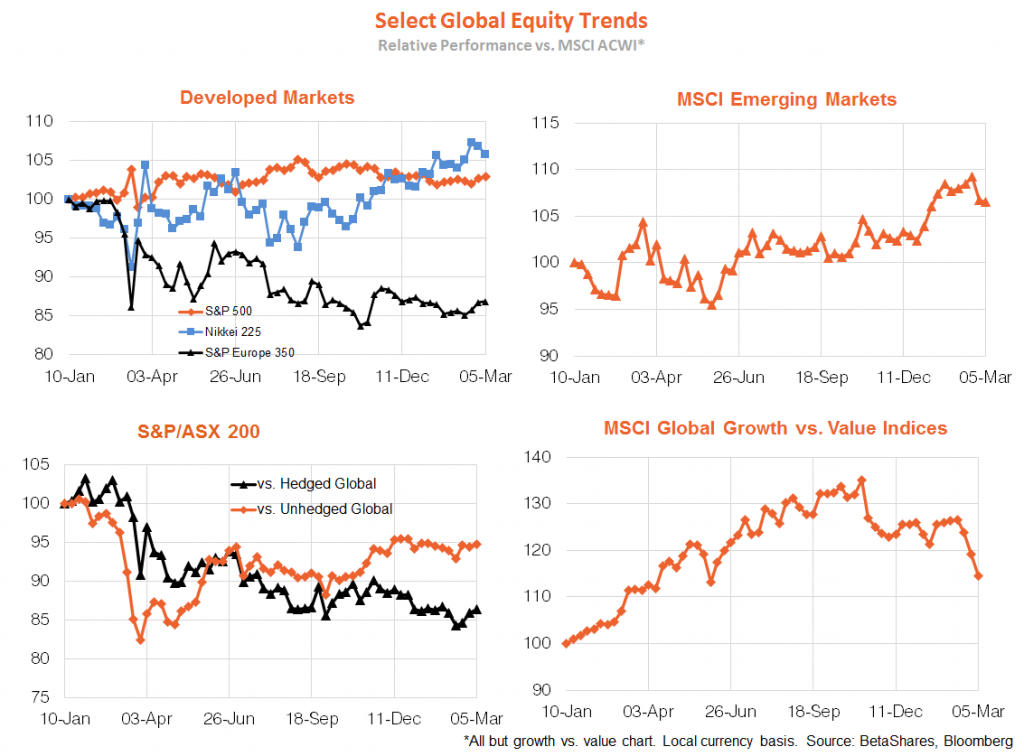 Like Powell, the RBA did not respond to recent bond market moves by promising an expanded bond buying program at last week’s Board meeting, though a day earlier it did announce a bring forward of some of its planned purchases.

All up, local bond yields eased back a little last week after very steep recent gains. The $A has also eased back after briefly touching US80c a few weeks ago. The growth to value rotation also remains evident in the local stock market with technology underperforming relative to resources and financials. Overall, the S&P/ASX 200 has levelled out in recent weeks. 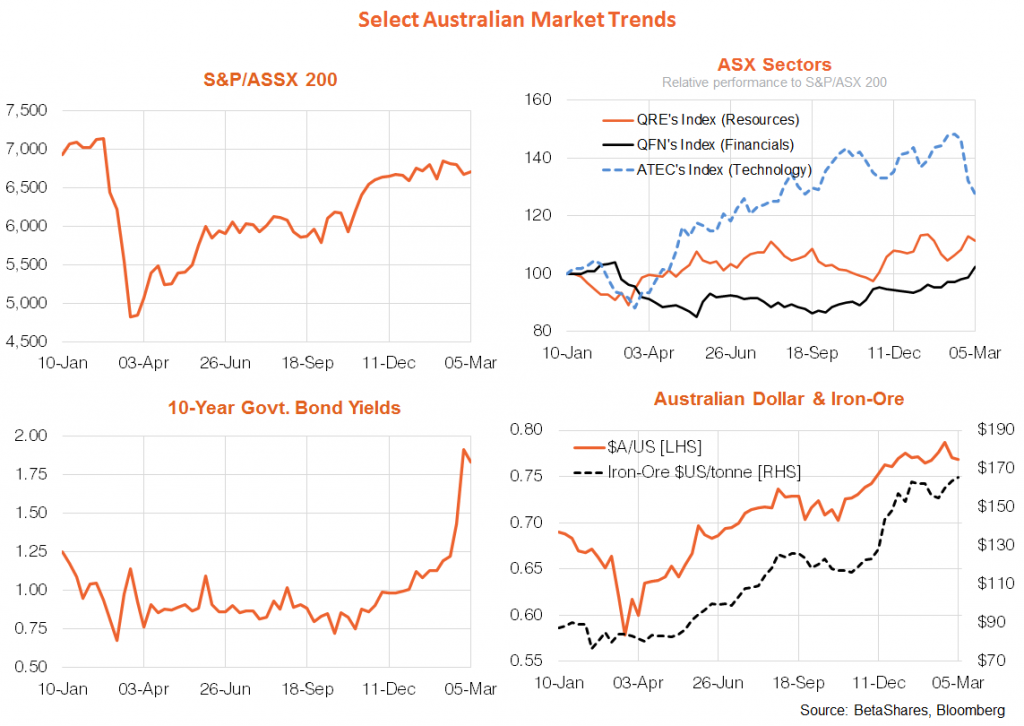 This week’s data highlight includes the National Australia Bank and Westpac surveys of business and consumer sentiment respectively, the first due today and the latter tomorrow. Both are likely to show still fairly upbeat confidence.  RBA’s Lowe speaks on Wednesday, though is likely to continue to stress that accommodative policy will remain for some time to come.