It was risk on again last week in global markets as seemingly encouraging COVID-19 vaccine trials got investors excited early on, before experts started to raise questions about the significance of the results. Either way, the share price of the company in question, Moderna, popped following what was only a press release (not a peer reviewed scientific study), which was fortuitous given it then announced it would raise more capital!

More broadly, the central narrative of ‘economic re-opening’ remains in place, with the fear of stock market overvaluation, potential second waves and/or only a sluggish economic recovery taking a back seat to hope and optimism. Effectively, Wall Street is continuing to price in a V-shaped economic recovery until either the data or pesky virus suggests otherwise. As I indicated here in previous weeks, in the case of the U.S., such doubts could still be weeks or even months away – as we’re likely to get at least an initial ‘pop’ rebound in plummeting retail sales, confidence and manufacturing indices as some of the shackles come of the economy. Second wave risks also remain, but seem a greater threat in the U.S. winter.

The U.S. S&P 500 rose 3.2% last week to 2,955 – or just above recent highs of 2,930-2,940 – suggesting the market could finally be breaking out to the topside of its recent range. Expect more excited chatter if the breakthrough is confirmed this week and prices push above the 200-day moving average. I’m still dubious of this rally, but concede the news flow may stay with the V-shapers for now.

In fact, market reaction to this week’s U.S. data will again be instructive. Although April reports on durable goods (Thursday) and personal spending (Friday) are likely to plummet, the market may well consider these ‘backward-looking’ and might instead focus on the anticipated bounce in the May reports on consumer sentiment and Chicago manufacturing (both due Friday). The Fed’s Beige Book report on the economy, due on Wednesday, may also attract  interest, though most negative elements could again be dismissed as backward-looking.

We remain on ‘vaccine alert’, given many companies around the world are feverishly working on their own solution. Otherwise, renewed U.S.-China trade tensions – especially now given China’s tightened grip on Hong Kong – could create some jitters, but my sense is that Trump ultimately won’t want to risk Wall Street’s wrath by rattling the sabres too loudly.

Australia is also basking in ‘re-opening’ hopes. Local stocks rose 1.7% last week with a further solid gain this morning. Interestingly, it’s been large-cap financial stocks dragging the local chain with the resources sector surging 6% last week on the back of stronger iron-ore prices (which in turn reflect hopes of Chinese demand recovery plus CV-19 related concerns with Brazilian supply). As is the case globally, the local tech sector is also on fire. In an encouraging sign, an ABS labour survey last week hinted at a stabilisation in employment, and the Federal Government has slashed back the employment support funding it thought would be required.

As is the case in the U.S., corporate earnings continue to be quietly slashed by analysts, and questions remain over the likely strength of the recovery and second wave virus risks – but these are problems for another day! In terms of local data, we can readily again dismiss the Q1 reports on construction and business investment on Wednesday and Thursday respectively as ‘old news’, but less easily dismiss the updated 2020-21 business investment outlook also due on Thursday. It’s likely that investment plans will be cut back notably – but again the market may conclude even this downgrade is old news and subject to eventual upward revision if the re-opening proceeds smoothly. 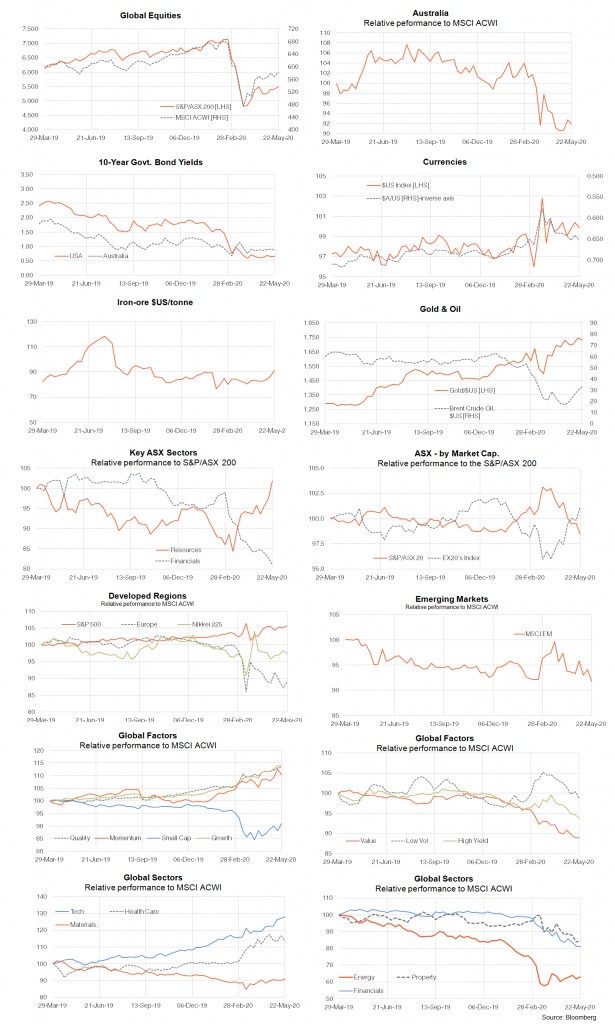