Top events of the past week

Global stocks continued to shrug off coronavirus fears last week with the S&P 500 up a lazy 1.6% to reach a new record high.  Reports of a possible peak in the number of new coronavirus cases was the main (positive) market development, notwithstanding a surge in reported cases in China – due to an apparent change in reporting methods. At this stage global markets are still attempting to “look through” the viruses’ hit to global growth – as it’s still only likely to be short-term – though this could change if the (still relatively small) number of cases outside of China begins to rise.

Also noteworthy late last week was more Washington talk of a US “middle class tax cut” plus a proposed plan to encourage everyday American’s to invest in the surging stock market.  This could be just the talk Wall Street could latch onto to support a further rally this year, especially if looks like Trump will win in a canter.  Of course, whether he could get such a package through a Democrat controlled lower house remains to be seen – but that’s a problem for 2021! It also reminds me of former President George Bush encouraging more everyday Americans to buy a home during the housing boom – and we know how that turned out.  It adds to my suspicion that this decade long bull market could eventually end via a blow-off bubble, driven by central bank persistent low interest rate policy.

In Australia, last week’s economic data remained mixed – though consistent with a potential “asset price led” recovery later this year.  Home lending continued to rise strongly in December, which is consistent with last year’s rebound in house prices.  The RBA is hoping further house prices gains – and perhaps also the strong rally in equity markets so far this year – will help boost consumer spending in coming months even in the face of persistently weak income growth.   Business and consumer confidence, however, remained subdued in February – though, perhaps due to surging asset prices, at least did not sink a lot further in face of heightened coronavirus concerns.

Top events for the coming week

The coronavirus will remain global market’s major focus next week, though key Markit surveys of the US manufacturing and service sectors will also be of interest late in the week.  As noted above, the market’s would likely react negatively if there were more reports of contagion spreading to Europe, Japan or the United States.

As was the case with the recent US payrolls report, this week’s US industry surveys should confirm the economy is humming along nicely – and the envy of many other growth deprived economies such as Europe, Japan and even Australia.

Locally, Thursday’s employment report looms large – especially as the direction of the unemployment rate in coming months will effectively determine whether the RBA cuts interest rates again.  I suspect the unemployment rate will edge back up to 5.2% (from a recent drop down to 5.1%) and is still likely to break above 5.5% later this year.  That in turn should see the RBA eventually cuts rates again.

Have a Good Week! 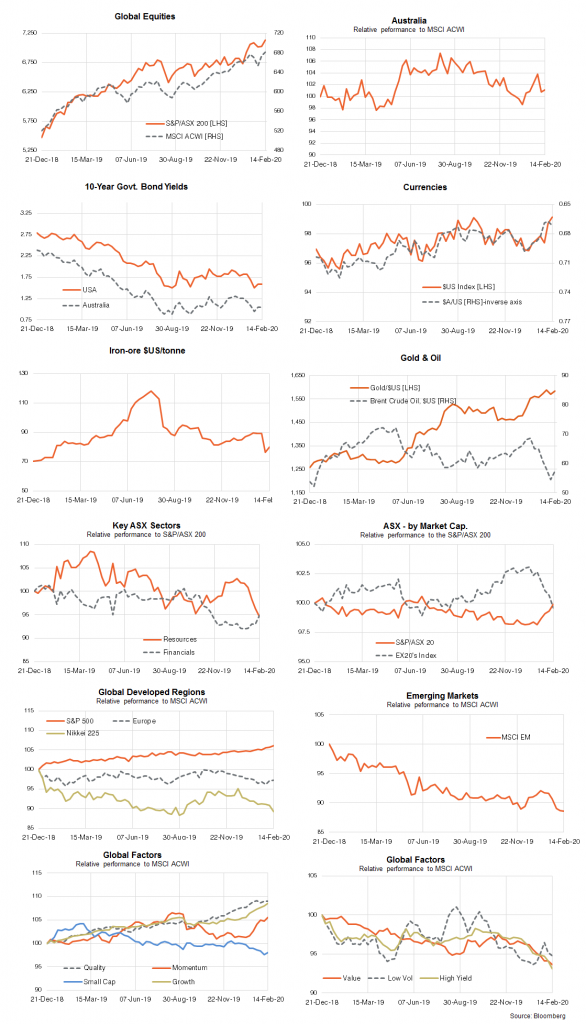