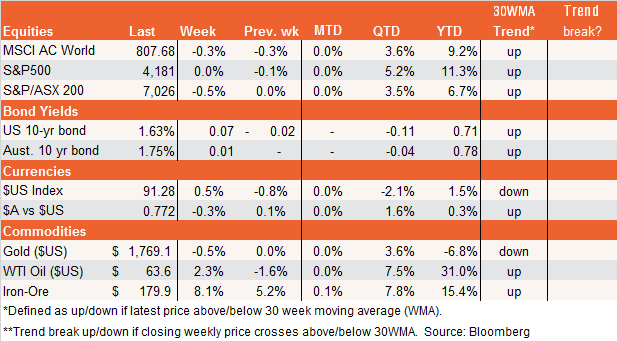 Global equities struggled to move higher last week even in the face of good economic, policy and earnings news – suggesting an element of ‘buyer’s exhaustion’ has perhaps crept into the market. Is all the good news now priced into the market? Is there anyone still on the sidelines waiting to buy?

The U.S. Q1 GDP surprised on the upside with a solid 6.5% annualised growth rate underpinned by the latest round of stimulus cheques that boosted consumer spending. The bad news is that U.S. quarterly GDP growth has likely peaked (6.5% annualised growth is unlikely to be repeated any time soon!), though the good news is that growth should still be fairly solid in the quarters ahead. Despite the red hot economy, the Fed reiterated its view that it’s too early to talk about tapering bond purchases, much less bringing forward rate increases. U.S. bond yields, accordingly, remained fairly well contained.

The U.S. Q1 earnings reporting season rolled on, with the tech giants easily beating expectations – which appeared such a poorly held secret that they failed to rally all that much. As is stands, 86% of the 60% of the S&P 500 companies that have reported so far have beaten expectations, comfortably above the 5-year average beat rate of 74%.

While equity and bond markets were becalmed, however, commodity markets remained strong -with decent gains in copper, oil and iron-ore just to name a few. Gold, alas, remained moribund. 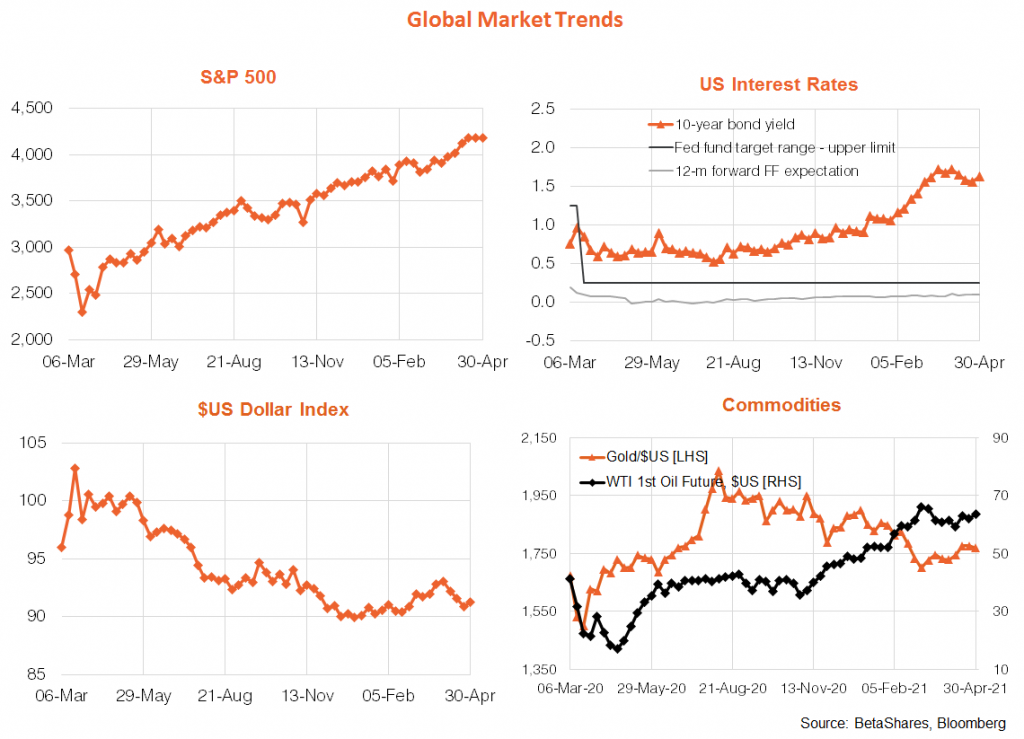 A key focus this week will be U.S. payrolls – though a strong gain is widely expected, and it may again be the case of the good news already being priced into an exhausted market. For the record, around 978k new jobs are expected to have been created in April, following gains of 916k in March, with the U.S. unemployment rate expected to drop to 5.7% from 6.0%.

Nervous bond market traders, nonetheless, may keep a watch on the parade of Fed speakers who crop up from time to time – with a few on occasion not following the script and sounding a bit more hawkish than Fed chair Powell. Outside the U.S., Thursday’s Bank of England meeting will be interesting to see if the Bank – like the Bank of Canada a few weeks ago – announces a tapering of its bond purchase program in light of an improving UK economic outlook. If it does – my base case is that it will not – it could cause a few more ructions in the bond market which could give the overbought equity market another reason to correct back. 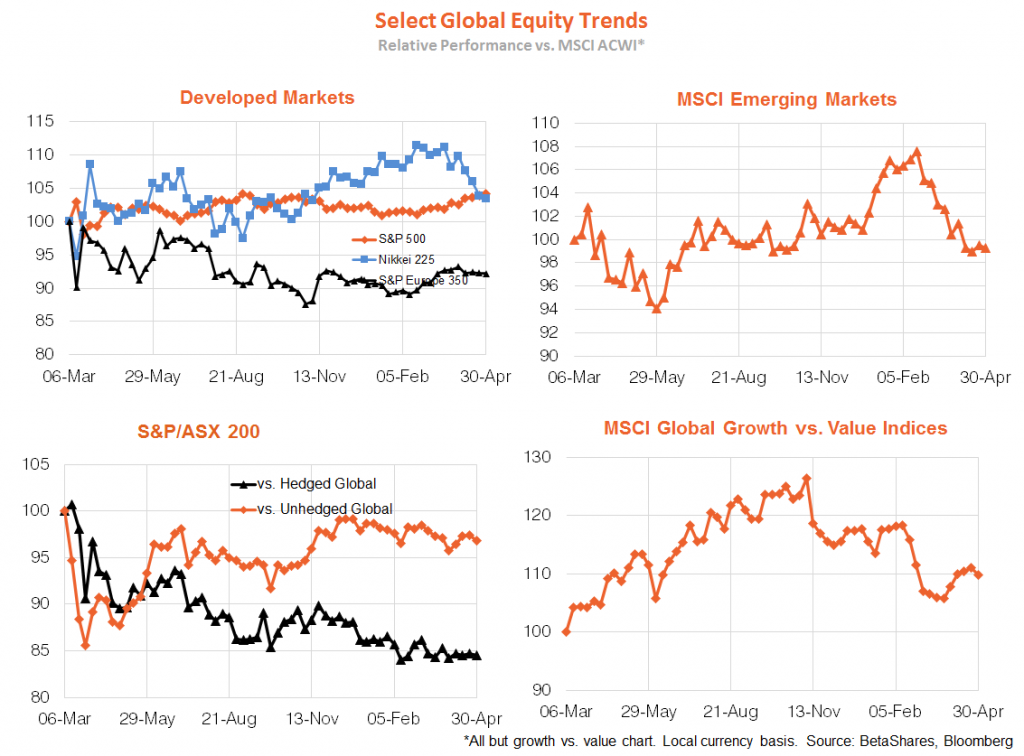 The Q1 consumer price index report was as benign as widely expected, with annual underlying (trimmed mean) inflation edging down to 1.1% from 1.2%. Note the annual rate is currently being held down by the COVID-related flat quarterly result in Q2 last year – but even if quarterly inflation lifted to 0.4% next quarter – in line with recent trends – it will only push annual underlying inflation to 1.4%, still below below the RBA’s 2 to 3% target band.

Also notable last week was the Federal Government’s commitment not to tighten fiscal policy too much in next week’s Budget, despite last year’s surge in debt and the now much better than expected economic outlook. Indeed, the Government announced billions more in child care subsidies, with the aim of improving female workforce participation.

Does ongoing fiscal largesse mean the RBA can bring forward policy normalisation? I doubt it. In fact, what appears to be happening is that policy makers in Canberra and Martin Place have agreed to a new focus in this low inflation world on bringing down the unemployment rate as far as possible – so as to elicit a lift in wage inflation. Whether inflation ultimately lifts or not (I suspect it will a little but less than the RBA wants), this is great news for workers and asset owners – though less so for those relying on interest income, or those worried about the build-up in public debt!

In this regard, the RBA’s policy meeting on Tuesday, a speech by Deputy Governor Guy Debelle on Thursday and the quarterly Statement on Monetary Policy on Friday should provide useful updates on the Bank’s thinking. While possible, I doubt the RBA will announce an extension of its current bond buying or ‘yield curve control’ measures. It can probably wait a few more months before deciding whether to extend – or possibly even start to wind back – these policies.

In terms of key trends, equities has consolidated of late after a modest upside breakout last month, while long-term bond yields have also stabilised. The most notable recent development has been the further leg higher in iron-ore prices, though the $A has yet to benefit all that much. 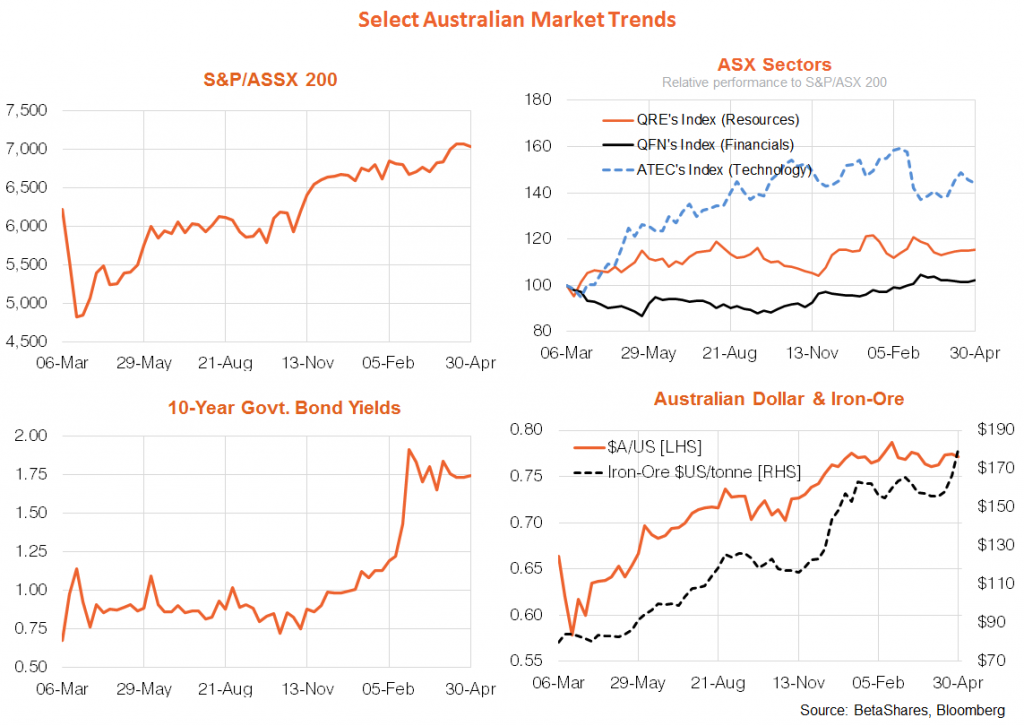