Global equities ground higher again last week reflecting ongoing hopes with regard to US-China trade discussions, encouraging US earnings reports, and a new UK-EU Brexit deal. The S&P 500 is only 1.3% away from a new record high!

Both the US and China are now focused on drafting a trade deal that could be signed by the APEC meeting in mid-November, and in that regard no news remains good news.

Contrary to fears, moreover, US financials kicked off the Q3 earnings reporting season with generally better than expected results – despite the squeeze on margins caused by lower bond yields.  For that we can thank the still solid US economy, which is underpinning growth in consumer lending, Wall Street deals and wealth management operations.

As regards Brexit, the obstinate UK Parliament again rejected a deal on Saturday, as it would effectively leave Northern Ireland within the EU customs union for an indefinite period.  Johnson appears likely to try again with the Parliament early this week, and failing that another Brexit-extension seems likely, assuming this is agreed to by the EU.  In short, a final Brexit resolution remains elusive.

On a softer note, US retail sales were much weaker than expected in September, declining by 0.3%. That said, given monthly sales can be volatile and the previous few months were fairly strong, it’s probably too early to suggest this is a clear sign of a weakening trend in the US consumer juggernaut.

US earnings and trade rumours will again be a focus for global markets this week, along with key Markit survey readings on the US manufacturing and service sectors. Note the Markit US manufacturing PMI revealed a small uptick in September, and anything other than an ugly plunge in October might provide the market with some reassurance on the US economy.  The services sector PMI has also turned surprisingly soft in recent months, however, and the market will be hoping for signs of stabilisation on the right side of 50.

Note the US market still attaches an 80% chance to a Fed rate cut later this month. Given the lack of strong Fed guidance to the contrary, and still lingering trade uncertainty, I still think a rate cut is on the cards. But if a trade deal is signed and global conditions start to stabilise, it could be the last US rate cut for some time.

In Australia, the decline in the unemployment rate back to 5.2% in September cements the case against a follow-up November interest rate cut. And given easing trade tensions, a December move also seems less likely.  That said, given Australia’s unemployment rate is still likely to trend higher in coming months, my base case is that a final RBA cut will take place in February. After that, the RBA will likely try to rely on a home-grown bond buying programme should it wish to provide further stimulus next year.

Trade optimism and a steadier RBA could see the $A pop higher over at least the next few months – potentially to back above US70c.

It will be a very quiet week in terms of local data, with the market likely taking direction from offshore events. 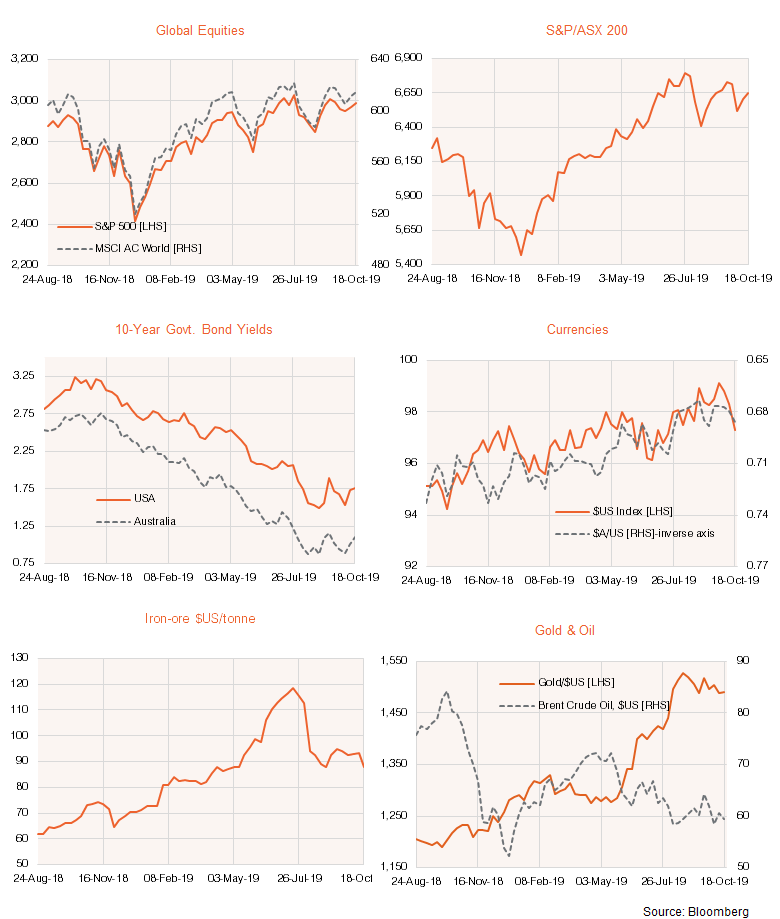