Global stocks rose for the third week in a row, reflecting another (so far) better than feared US earnings season, tentative signs of stabilisation in global manufacturing and “no news is good news” progress in US-China trade talks.

As regards the Q3 US earnings reporting season, FactSet reports that 40% of S&P companies have now reported, with 80% beating earnings expectations, which is above the 5-year average of 72%.  Overall, US earnings are down around 4% on year-ago levels.  As would be expected, companies with greater global earnings exposure (such as energy and technology) have endured the biggest earnings slump over the past year, while domestically focused sectors like utilities, property, consumer and financial stocks have had earnings hold up relatively better.

Of even more importance, the Markit US manufacturing index defied market expectations that it would fall to 50.7 in October (from 51.1) – and instead ticked up to 51.5. Even Germany’s manufacturing index enjoying a small rise in October, albeit it’s still stuck at a relatively low 41.9.  Fingers crossed, but these are tentative signs that the trade-war induced slowdown in global growth could be starting to stabilise, which bodes well for 2020 if the US and China can extend their trade truce at least until after the next US Presidential election in just over a year’s time.

Despite this tentative optimism, the Fed is still likely to cut funds rates for the third time this year at Wednesday’s meeting, to a range of 1.5-1.75%.  Indeed, the market sees it as a 90% probability. But one challenge for markets is what the Fed signals thereafter – as at some point, if optimism prevails, the Fed will likely need to signal a move back to a “neutral” policy bias.  The market has around one further rate cut priced in over the next year, which suggests further upward pressure on bond yields.  That said, a US 10-year bond yield all that much above 2% seems unlikely in coming months unless the Fed starts talking rate hikes again.  And if global growth is truly stabilising, such a modest upward “re-calibration” in bond yields should be easily accommodated by equity markets.

In other news, Friday’s US payrolls should confirm a further slowing in employment growth, with expectations for only a 100k jobs gain and a small rebound in the unemployment rate to 3.6%.  Annual wage growth is expected to tick up to a still non-threatening 3.0% from 2.9%.  Also on Friday, look for further confirmation of stabilisation in the US manufacturing sector, with the rival ISM index expected to hold steady at 51.5.

There was little new news in Australia last week, though that which was released tended to be soft – with further weakness in both skilled vacancies and the CBA’s business conditions survey.

This Wednesday’s consumer price report is likely to confirm underlying inflation remains stubbornly stuck at around 1.6%, or comfortably below the RBA’s 2 to 3% target zone.  September home building approvals are expected to be flat when released on Thursday.  This would be far from inspiring after a string of recent monthly declines and only confirm the trend still appears downward.

Bottom line: despite tentative sign of global optimism, home grown weakness and low inflation still likely means the RBA will feel the need to ease policy further in the months ahead. 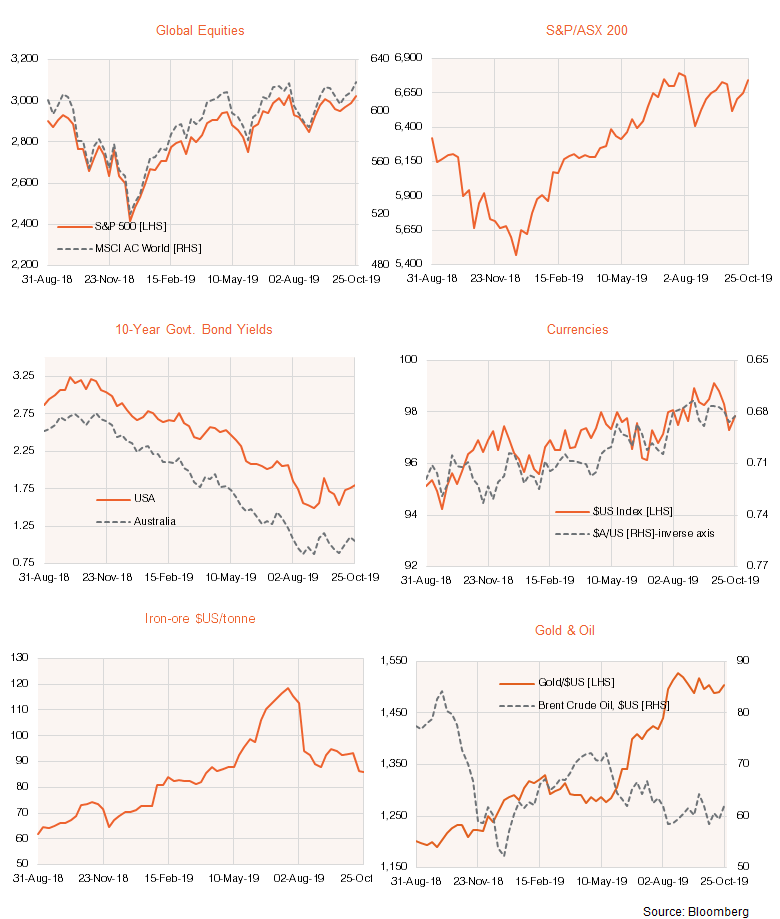