Although the unwinding of COVID related price subsidies helped boost annual consumer price inflation in the June quarter, the fact remains that underlying inflation – as measured by the trimmed mean – remains well below the Reserve Bank’s target.  Along with the extension of Sydney’s lockdown to end-August, this virtually eliminates any chance the RBA will reduce its bond buying program in September.

As evident in the chart below, trimmed mean inflation – which strips out items with the most volatile price changes either to the upside or downside – lifted to only 1.6% in the June quarter.  By contrast, trimmed mean inflation in the United States is notably higher, having surged in recent months to 2.9%.  So even the post-COVID economic reopening to date has not managed to lift Australia’s rate of underlying inflation to the same extent as that evident in the United States. 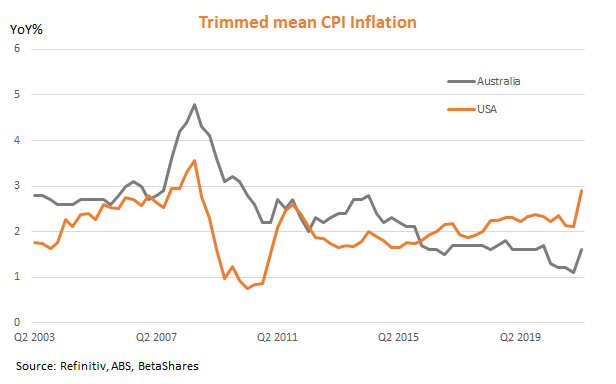 A sustained lift in inflation to anywhere near the RBA’s 2 to 3% target requires a sustained lift in wage inflation to at least 3-4%.  With the unemployment rate having fallen to 4.9%, we’ve made a good start but it remains unclear how low the unemployment rate needs to go before workers have enough bargaining power to lift their wage demands.  Given technology disruption, the eventual return of foreign workers and global competitive pressures, a decent lift in wage inflation remains sometime away.

The good news, however, is that this means the RBA can afford to let the economy “run hot” for several years if possible, though this also risks undue upward pressure on share market and house prices in the meantime.