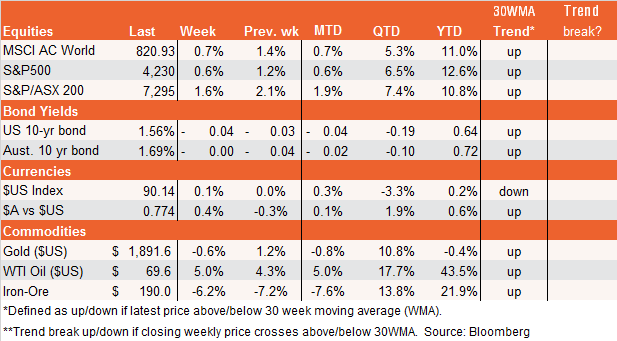 Global equities ended last week up modestly, and appear to be back in the “bad news is good news” frame of mind. Stronger than expected U.S. manufacturing and service sector indices set markets back early last week, though stocks then rallied strongly on Friday following a (still strong, but) weaker than expected U.S. payrolls report. Indeed, U.S. jobs lifted 559k in May (market 671k), which the market took to mean that any risk of ‘taper talk’ at next week’s Fed meeting has been effectively quashed. U.S. 10-year bond yields eased over the week to 1.55%, to be at the lower end of their sideways range since early March. Oil prices marched higher, with OPEC agreeing to keep a tight reign on production at least for a while longer. 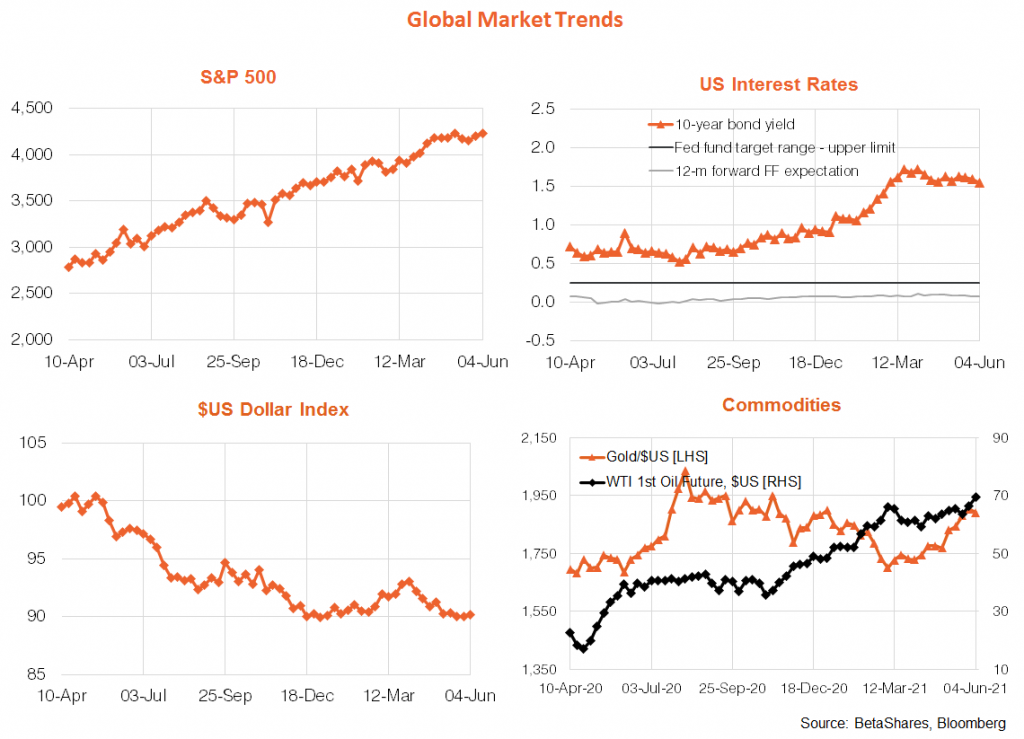 The market took the payrolls report as dovish for bonds, even though the relative weakness in jobs seems as much due to lingering labour supply constraints as soft demand. Indeed, the U.S. unemployment rate still dropped from 6.1% to 5.8%, due to a still stubbornly subdued participation rate (which remains below pre-pandemic levels). And despite a solid 292k bounce back in leisure and hospitality jobs – which are usually at below average wages – average hourly earnings still rose 0.5% in the month, after a chunky 0.7% gain in April. This suggest some underlying wage pressures due to lingering staff shortages.

Of course, while there are no doubt notable cost and (likely) wage pressures in the U.S. economy at present, the key question is their likely persistence. At this stage at least it seems like the Fed will give the economy the benefit of the doubt (due to broader measures of labour spare capacity still considered to be well above full-employment levels), such that next week’s Fed meeting is still likely to keep taper talk on ice. That suggests bond yields should remain range-bound and equities can continue to inch ever higher.

All that said, the market faces another test this week with the U.S. consumer price index report for May. Core inflation is expected to rise by 0.4% – which is still reasonably elevated but less than the 0.9% shocker for April – which in turn would push up the annual rate to 3.4% from 3.0%. Unlike last month, however, at least this time the market is prepared for a high result. Of course, if the result is much higher – which can’t be ruled out – it could shock the market. But provided the general sentiment remains that this pricing pressure is temporary, the Fed might still nonetheless choose to look the other way at next week’s policy meeting.

In terms of key equity trends, emerging markets have staged something of a comeback in recent weeks, while the growth vs. value tussle continues. 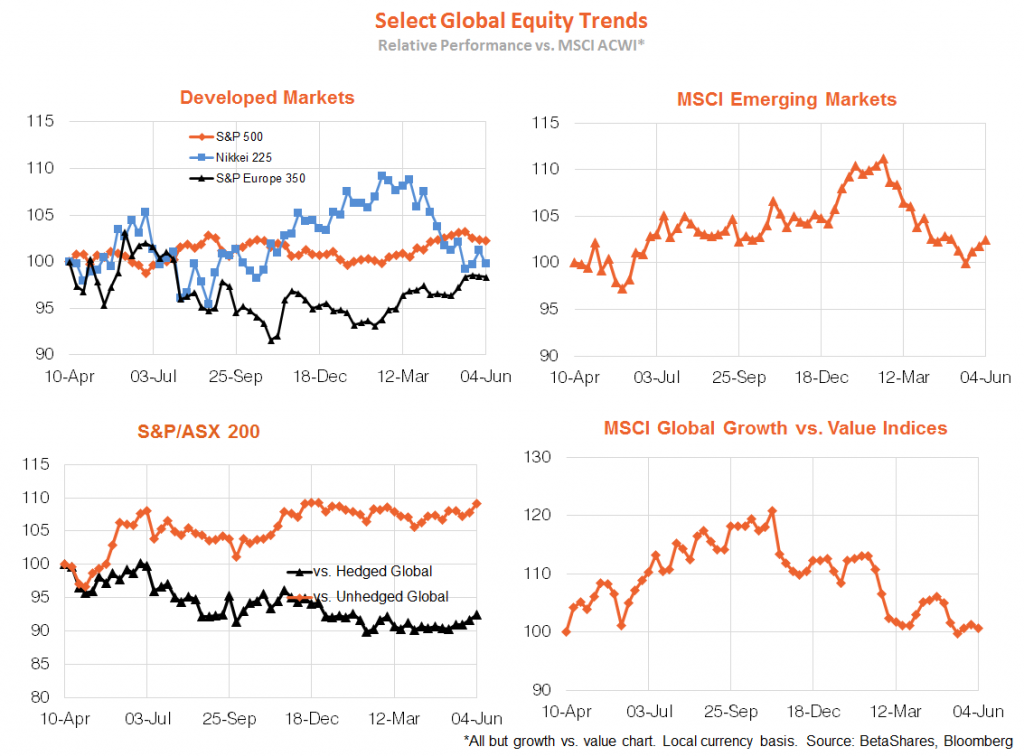 The local highlight last week was the stronger than expected Q1 GDP result, with growth up 1.8% (market 1.5%) reflecting strength across housing activity, business investment and consumer spending. While economic re-opening is clearly helping, government incentives for home building and equipment investment are currently providing extra juice to be sure – which should eventually wane.

In other news, key media reports suggested that the RBA may well tweak its policy settings at the upcoming July meeting – most particularly by not rolling its 0.1% yield target from the August to November 2024 Treasury bond. In theory, that should represent no change in policy as the RBA has long left itself open to raising rates in 2024 (whereas rolling the bond target would have implied less risk of a policy tightening in 2024). That said, the optics of this move will suggest the RBA is inching towards providing less policy stimulus. At the same time, the media reports suggested the RBA will extend its bond buying program, though give itself added flexibility by switching to monthly (rather than five-monthly) bond-buying targets.

Ultimately however, and as already seen in the market following these reports, I don’t see these RBA moves as having a major impact on bond yields – or hence bond market pressure on lofty equity valuations. Greater impact on yields may arise when the Fed finally nears tapering and central banks get closer to raising short-term official rates.

Indeed, as evident in the chart set below, local 10-year bond yields remain range-bound, and the equity market pushed to new record highs last week – underpinned by ongoing strength in financials. Also noteworthy last week was the drop back in iron-ore prices from nosebleed levels. 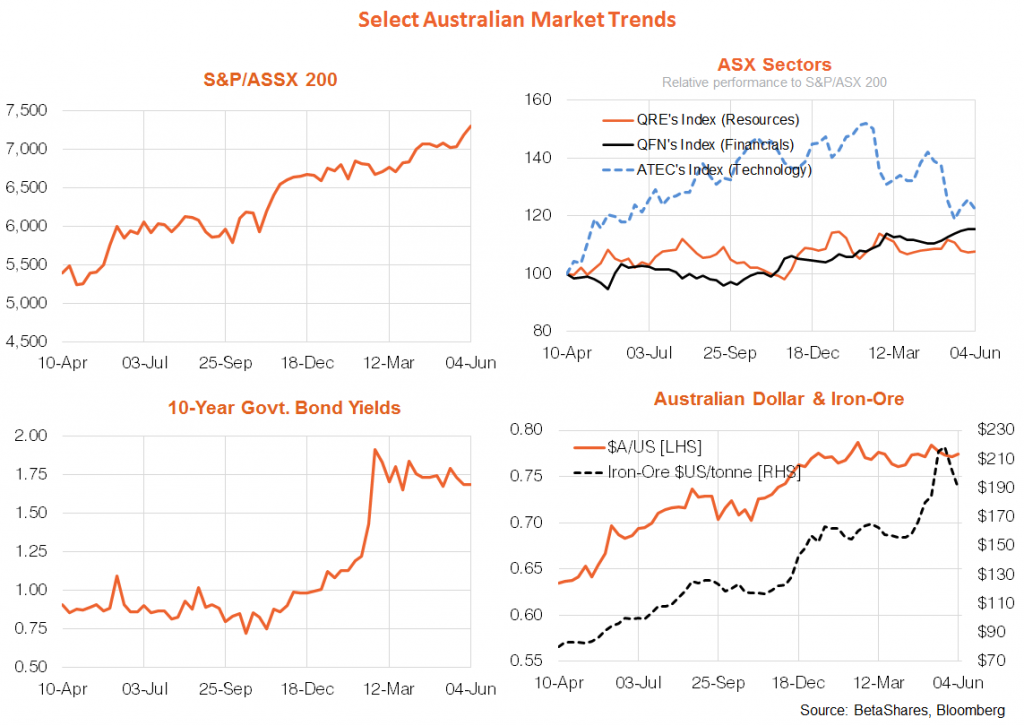 The key local events this week will be today’s National Australia Bank (NAB) May business survey. While business conditions and confidence are likely to remain strong, a higher than normal result will be evident of wage and cost pressures.