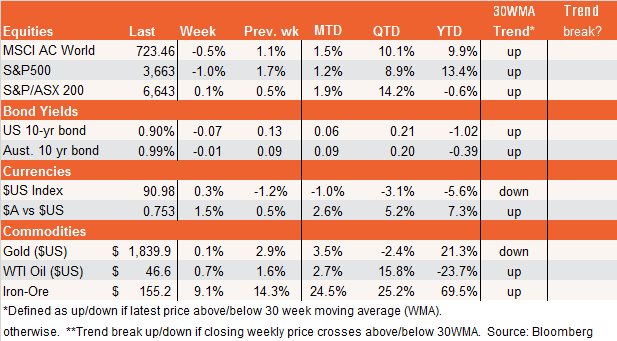 It was a frustrating week for global markets with the U.S. failing to agree on a new stimulus plan and the UK and EU also failing to agree on the terms of their post-Brexit trade relationship. America’s raging COVID crisis – and recent ratcheting up of social distancing restrictions – is also starting to take its toll on the economy, with a strong 137k lift in weekly jobless claims to 853k. As anticipated, the European Central Bank responded to Europe’s recent COVID wave with an expanded stimulus program – it is also likely hoping to contain strength in the Euro.

All that said, were it not for the vaccine cavalry – riding to the rescue in the nick of time – the outlook for the global economy and equity markets would likely be a lot more dire at present given the repeat COVID waves still buffeting major economies.

The UK became the first country to roll out vaccine treatments last week and the U.S. is set to start its own program early this week. Market focus, however, likely will remain on the progress (or lack thereof) in U.S. stimulus talks, and to a lesser extent UK-EU talks. The Fed also meets this week but is expected to keep policy unchanged. Telsa joins the S&P 500 on Friday with a weight of 1.5%. Trading at a price-to-forward earnings ratio of 107, the good news is that it makes the FAANG stocks (trading on forward PEs of between 20 and 40) look decidedly cheap. I’d note that Facebook listed at a similar nosebleed valuation and we all know how that turned out! Can Tesla replicate Facebook’s success?

As I suggested last week, the range of business and confidence indicators released locally last week were clearly upbeat. Both the NAB measure of business conditions and the Westpac measure of consumer sentiment spiked higher as Victoria emerged from lockdowns, the RBA eased policy, and a general sense of optimism about how we’re dealing with the COVID crisis seems to be permeating through the country. The ANZ measure of job advertisements also surged by 14% in November. As I wrote last week, the drop in local interest rates together with a recovering economy suggests house prices could surge next year.

Along with the ongoing strength in iron-ore prices it’s perhaps little wonder that the $A, and the sharemarket, are doing so well. Indeed, it’s ironic that despite headlines bemoaning our worsening trading relationship with China, the world’s second-largest economy is still voraciously devouring our chief export to its fine shores – and should China threaten to restrict demand it would likely cause iron-ore prices to surge further and make life even harder for its steel makers. The relative strength in the $A and local stocks in recent months also appears part of a broader ‘growth to value’ rotation taking place globally – as the added premium attached to growth/technology stocks during the COVID crisis continues to unwind.

More good news should come this week with the labour market report on Thursday, which is expected to reveal another solid 40k jobs gain in November after the blowout 178k surge in jobs in October. The unemployment rate is expected to hold steady at 7%. Also watch out for the mid-year economic and fiscal outlook to be released sometime this week. Thanks to much higher than expected iron-ore prices and a faster economic turnaround, budget deficit projections are likely to be scaled back somewhat – albeit still remaining historically enormous. 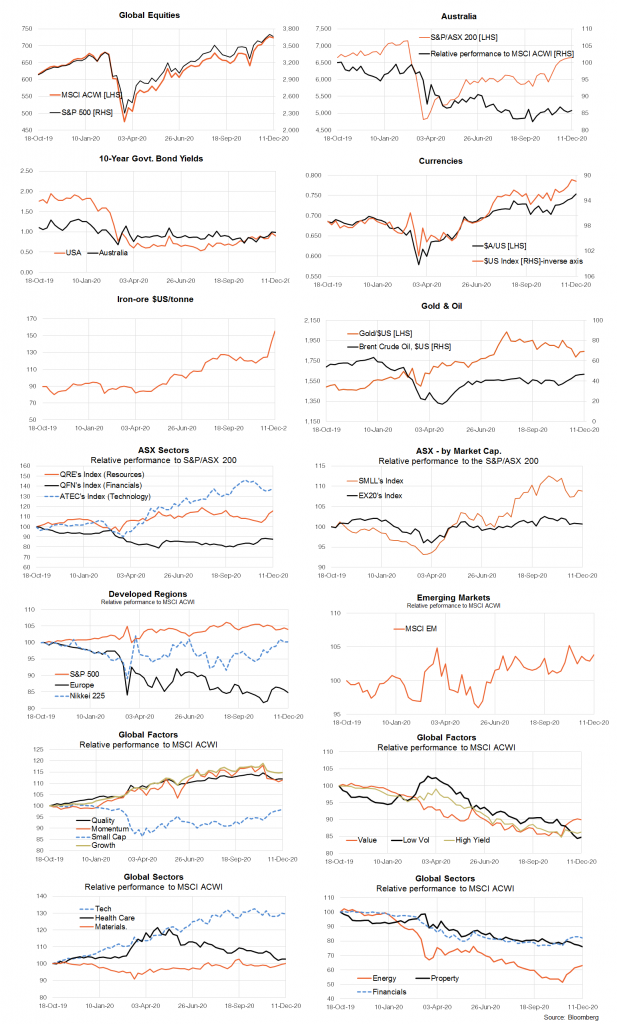