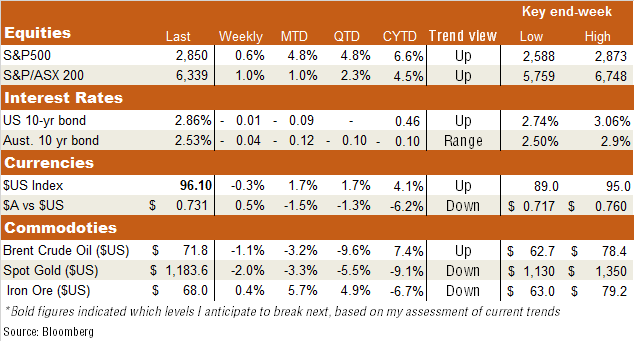 Turkey dominated the headlines for much of last week, with the fall out spilling over into emerging markets.  But the big news was late in the week with the announcement that China and the US would hold trade talks in Washington this week, which saw the the S&P 500 end the week 0.6% higher.  Following weaker than expected Chinese retail sales and industrial production reports last week, and the share market slump, it’s tempting to suspect Chinese officials are worried about a larger than desired growth slowdown.  Indeed, Chinese officials have already moved to ease credit conditions in recent weeks, and last week announced new plans to boost infrastructure spending at the local government level.  The controlled decline in the Yuan also suggests some desire to support exports in the face of higher US tariffs.

That said, it could be that China has concluded it can’t risk letting the Yuan drop too far, lest it cause financial instability – not just in China but across the region.  Hence, maybe China is showing a greater willingness to talk, although it remains to be seen whether it can meet US demands to better protect the latter’s intellectual property, especially in the tech area.

Closer to home, economic news was generally good, with the NAB Index of business conditions holding at high levels and the unemployment rate edging down to 5.3%.  The NAB survey also revealed that hiring intentions remain upbeat, and there seems a growing chance the unemployment rate could hit 5.0% much earlier than the RBA’s latest forecast of H2’20.  Even so, it still seems unlikely this would spark much of a lift in wage growth anytime soon – in the UK, for example, unemployment hit 4% last week, its lowest level since 1975, while wages growth is still only around 2.5% p.a.  The S&P/ASX 200 pushed up a further 1% last week, helped by a smattering of good (or better than feared) earnings reports and hopes that the weaker $A could add further upside to offshore earnings.

China-US trade talks are likely to be a focus of global market attention this week, followed by the thoughts of Fed chairman Powell in a major (though likely wonkish) speech at Jackson Hole on Friday. Of particular interest will be whether Powell displays any sympathy for the impact of rising US interest rates on emerging markets – a dogmatic reiteration of the Fed’s intent to lift rates could further support the $US and hurt emerging market stocks.  The US-Turkey dispute will also remain in focus, with the US threatening to impose even higher tariffs unless a US Pastor is released from Turkish home detention.

We’ll also hear from senior RBA officials over the week, but they’re unlikely to shake from the current consensus view that interest rates aren’t about to change anytime soon.