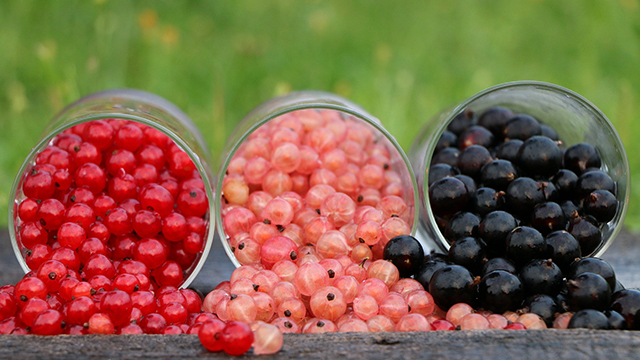 The Australian sharemarket has struggled in recent times to replicate the performance of many global peers.  One of the major drags over the past year has been the financial sector, reflecting a slowing in credit growth and new regulatory concerns stemming from the banking royal commission.  Outside of Australia’s “mega-cap” stocks, however, sharemarket performance has been notably better and the EX20 ETF offers a relatively easy way of gaining exposure to this growth dynamism.

One of the challenges faced by Australian investors is that the benchmark index typically tracked by many investment managers is the S&P/ASX 200 Index – an index containing the top 200 listed companies ranked by market capitalisation.

As seen in the chart below, however, this is a relatively top-heavy index – while the top 20 companies account for only 10% of the companies in the S&P/ASX 200 Index, they account for almost 50% of market capitalisation of all companies in the Index.   In terms of national benchmark indices, this is relatively high by global standards: for example as at end February 2018, the top 20 stocks in America’s S&P 500 Index account for 34% of the Index’s total market capitalisation, and 24% in Europe’s Euro Stoxx 600 Index. 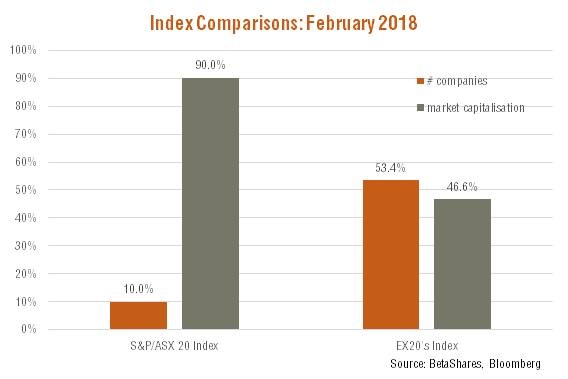 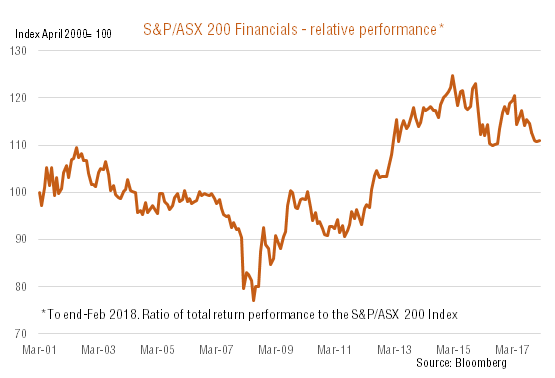 The BetaShares Australian Ex-20 Portfolio Diversifier ETF (ASX Code: EX20)  was designed to provide investors an easy and cost-effective way of diversifying away from Australia’s mega-cap stocks.  As such, it provides exposure to approximately 180 stocks listed on the Australian Securities Exchange, ranked from number 21 to number 200, based on their market capitalisation.  As seen in the chart below, the Index which the EX20 ETF aims to track has performed relatively well against the S&P/ASX 20 Index in recent years – and particularly since the period of financial sector underperformance began in early 2015 to late March 2018. 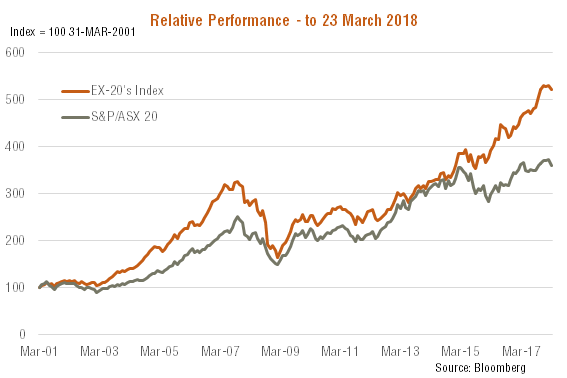 This outperformance has also reflected relatively stronger earnings performance rather than just inflated valuations.  Indeed, over the past year to end February 2018 “forward earnings” for stocks in the S&P/ASX 20 Index have grown by 3.2% compared with 5.4% for those in the broader S&P/ASX 200 Index.  In turn, this implies earnings among stocks in EX20’s Index grew by 7.9%.

What’s more, consensus earnings estimates compiled by Bloomberg suggest forward earnings for companies in EX20’s Index will grow by 7.3% over the coming 12 months, compared with only 2.6% for those in the S&P/ASX 20 Index.  Valuation wise, the price-to-forward earnings ratio for the EX20 Index is estimated at end-February at 16.6 – or a 6.2% premium to that of the S&P/ASX 200 Index.  That’s only slightly above the 10-year average premium of 5.4%.