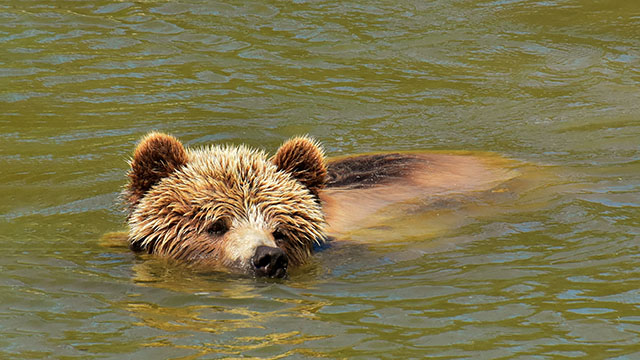 With global growth slowing there is understandable concern that the decade long global bull market could be finally coming to an end.  This note suggests, however, that bear markets still remain a relatively rare occurrence, and even rarer in the absence of a US recession.

The chart below details daily drawdowns in the US S&P 500 price index since the mid-1950s, along with shaded periods of recession as defined by the National Bureau of Economic Research (NBER).  Several features are noteworthy from the chart.

For starters, the market is normally trading at levels below a previous peak level. Indeed, of the 22,914 trading days captured by the chart, the market was only at new record highs on 1,220 days or 5.3% of the time.  Indeed, the market has spent 10,779 days (47%) trading at levels more than 15% below previous peak levels.   Equity investors are usually always carrying some paper loss, and quite significant paper losses around one half the time – intestinal fortitude is required when owning stocks!

That said, the good news is that equities do tend to trend up over time.  Using quarterly data, equities have risen in 65% of the 255 quarters covered.

In terms of daily market draw downs from previous peak levels, 96% have been less than 10%.  There have been 21 market “corrections”, or declines of least than 10%, of which 9 went on to become bear markets – or declines of at least 20%.  [Note on this basis, there have been two other periods which came close (the Asia crisis of 1998 and during the 1990s recession) but just stopped short. So far, at least, the near 20% decline in the market in late 2018 is also still in play as the market has yet to reach new highs.]

All this suggests that if we knew nothing else, history suggests there’s only a 43% chance that a market correction would turn into a bear market and a 65% chance that equities will rise over any given quarter.

What role do recessions play?

The NBER is charged with defining the times periods in which the US is in recession.  It just so happens there have also been nine recessions since the mid-1950s.

How are recessions and market declines related?  As seen in the table below, of the nine market corrections that went on to become bear markets, six were associated with recessions. That suggests that if there’s a market correction and we think a recession is also likely, history suggests the probability of a bear market occurring jumps from 43% to 67% (6/9)!

The table below provides even more details on the relationships between bear markets and recessions. 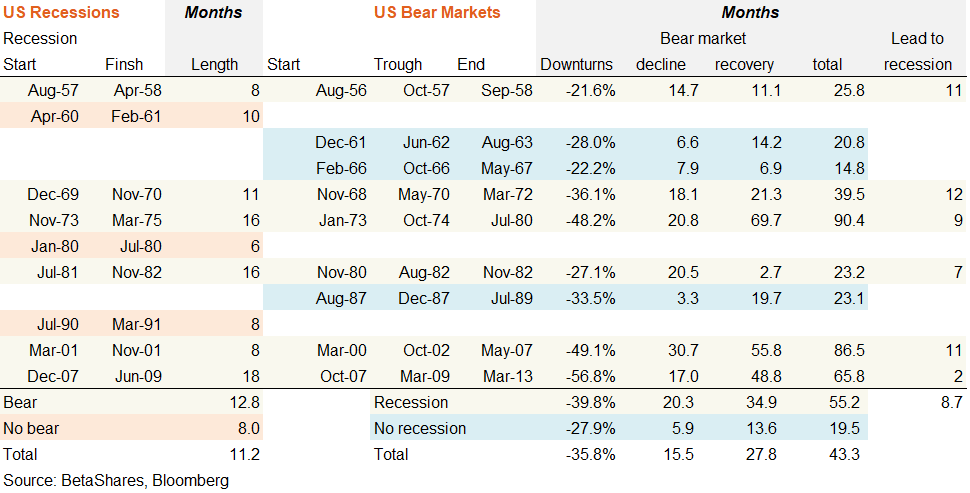 As evident, of the nine bear markets, six have been associated with a recession. In these cases, the average market decline was 39.8% and lasted 20.3 months. The market peak also led the start of the associated recession by an average of 8.7 months.

Note there were also three bear markets without a recession – in 1962, 1966 and 1987.  The 1962 market decline was caused by the “Bay of Pigs” disaster (war risks), while the 1966 decline was caused by modest Fed policy tightening which nonetheless failed to trigger a recession.  The famous 1987 market drop reflected a period of extreme market over valuation relative to interest rates (financial bubble).

Bear markets not associated with recession tend to be shallower and shorter, with an average market decline of 27.9% lasting 5.9 months.  This would be even truer if we included the brief market decline during the 1998 Asia crisis/Russian debt default – which was 19.2%.

In short, even in bear market periods, the likely degree to which market weakness persists tends to depend critically on whether recessionary conditions are also evident.

The current market implication is that barring a US economic recession (which based on lead indicators does not seem likely anytime soon), history suggests the current market correction is not likely to evolve into a bear market – and even if it does, the resulting bear market should be relatively mild by historical standards if recession continues to be avoided.