The highlight of the coming week will no doubt be Thursday’s labour force report.  Given the notorious volatility in monthly employment changes, the single best measure of labour market trends remains the unemployment rate.

As seen in the charts below, the unemployment rate has been broadly trending lower since late-2014, which has been consistent with an improving trend in key labour market indicators such as the NAB employment index (from its monthly business survey) and the ANZ Jobs Ads series. 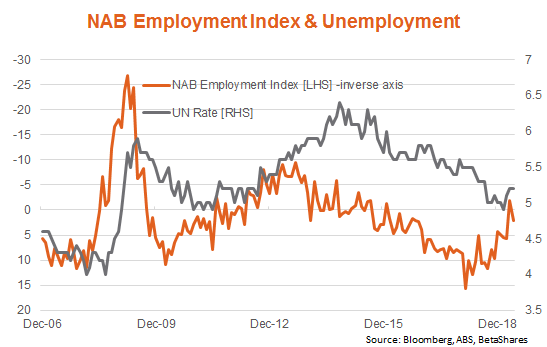 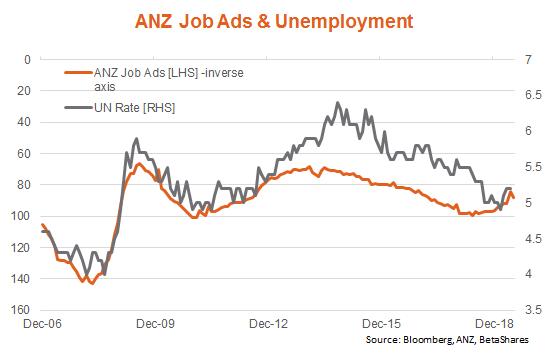 Yet as also evident from the charts above, the trend in these key labour indicators has clearly turned in more recent times. NAB’s employment index peaked in February last year, and has clearly weakened in a way not evident since the financial crisis over a decade ago (although, so far at least, the weakening has not been as bad).  The ANZ Job ads series peaked in May last year, and has now declined by 11% at at June.

Given the Reserve Bank has recently indicated it thinks the “full-employment” unemployment rate is now closer to 4.5% or less – rather than 5% – this prospective move higher in the unemployment rate would clearly be unwelcome, which will likely keep the RBA inclined to lower interest rates further over the next year.

Indeed, my base case is the RBA will leave rates on hold in August and September, though likely cut rates again in October or November.  I then anticipate a fourth and final rate cut to 0.5% in early 2020.