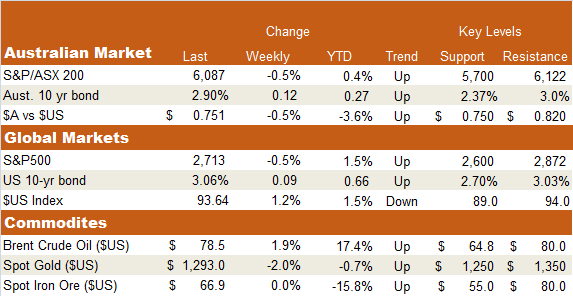 Fear over higher bond yields and hurdles in China-US trade talks were the main drivers of weakness in US stocks over the past week.  A stronger than expected gain in US April retail sales – which indicates US consumer spending has bounced back nicely after unexpected weakness in early 2018 –  saw US 10-year bond yields breakout to a new high of 3.1% for the year.  An encouraging earnings report from US Department store Macy’s underlined the strength in the consumer sector.

That said, US 10-year yields has eased back to 3.06% by week’s end, as signs of protracted US-China trade negotiations added to the risk-off sentiment in equities.  Solid US economic data, along with weaker reports in Japan and Europe, caused the $US to rise further.  Italy’s new coalition government – and associated threat of a budget blowout – also helped undermine the Euro.  Meanwhile, oil prices got ever closer to $US80/barrel on reports of tightening global supply.  Indeed, Saudi Arabia is getting close to its apparent $US80 oil target, and if prices keep rising it would not surprise if reports start to emerge of OPEC agreeing to expanded production.

In Australia, the S&P/ASX 200 has tried and so far failed to break resistance around its highs back in January, as financials last week continued to drag while resources – helped by firmer oil prices – gained further.  Local economic data was generally a bit more downbeat than usual, with another weak reading on wage growth, slowing employment growth, and a drop back in consumer sentiment.  Reports from the Reserve Bank only affirmed its intent to keep rates steady for some time.

There’s little in the way of major data or key events either locally or overseas this week.  An 11th hour weekend agreement between the US and China to keep talking about trade and postpone – for now at least – their respective tariff threats should be met with some relief in the local market today and the US market tonight.  Minutes from the Fed’s May meeting are released on Wednesday and will be closely scrutinised for any hint that it’s leaning toward more than two further rates hikes this year (which I doubt will emerge).

In Australia, following the shocks associated with home lending and financial planning, there’s hope that the negative headlines from the Banking Royal Commission could ease somewhat this week as focus turns to small business lending.  For bank investors at least, there’s lingering hope that the “worst could soon be over” as regards Royal Commission revelations. Either way, while local banking sector valuations appear to have cheapened, the sector still faces slowing credit growth and an uncertain regulatory future.