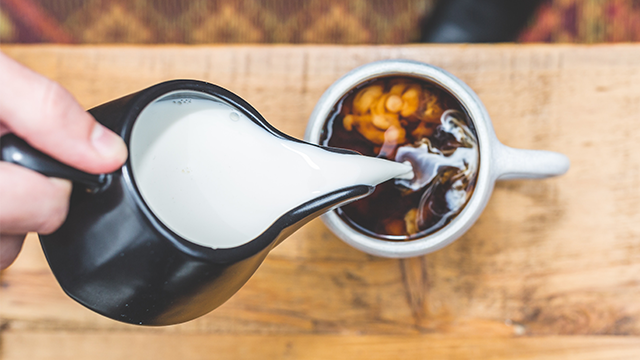 One of the most common questions I get asked on ETFs relates to liquidity, largely driven by the common misconception that ETFs are somehow illiquid due to the fact that ‘on-screen’ liquidity at times appears limited (particularly compared to popular shares). Even though we have dealt with this area a number of times in other posts, I thought I would return to this topic once again, this time assisted by a ‘real world’ example that occurred a few months ago in one of our ETFs.

On 13 July this year, a single block trade was executed for A$86.1m in the BetaShares S&P/ASX 200 Resources Sector ETF (ASX: QRE). This one trade represented over 20x the fund’s average daily traded volume and was equal to a 60% decrease in the fund’s total assets in one execution.

This trade provides a good example of the true liquidity that can be provided by an ETF – it demonstrates how an institutional investor was able sell their ETF position in significant volume without negative impact on the fund, the existing unitholders, the ETF’s unit price or the market in the underlying securities.

Liquidity refers to the ability of an investor to buy or sell an asset quickly without affecting its price. Indeed, one of the key advantages an ETF provides investors, as compared to an unlisted managed fund, for example, is its intraday liquidity. This refers to the ability of an investor to easily enter and exit (or buy and sell) their ETF positions quickly and efficiently during the trading day. My colleague discussed ETF liquidity more generally in his article here – particularly focusing on how market-makers operate behind the scenes to assist ETFs in remaining liquid, despite what might appear to be low volume available ‘on screen’.

What ETF Liquidity Is Not

In contrast to shares and listed investment companies (LICs), volume on-screen, average daily trading volume or the total AUM of a fund will not accurately reflect the true liquidity available in an ETF. These measures often vastly understate an ETF’s effective liquidity, as well as the ability of the open-ended ETF structure to efficiently adjust supply to large changes in total AUM from individual trades.

Rather, as we always tell clients, ETFs should be considered at least as liquid as their underlying holdings. As a result of this, the primary factor which could impact the liquidity of an ETF is how liquid the actual securities or assets held by the ETF are. As long as sufficient liquidity exists in the underlying holdings, then the buying/selling required to ‘create’ and ‘redeem’ ETF units without market impact will remain fluid – irrespective of the number of units on issue, total AUM or the number of unitholders in the ETF.

Look to the Implied Liquidity of an ETF

To gauge the liquidity of an ETF it is best to look to the average daily volume of the ETF’s underlying assets rather than that of the ETF itself.
One way in which analysts attempt to gauge this underlying liquidity is what is referred to as ‘implied liquidity’. Implied liquidity is considered a conservative measure of the volume that can potentially be traded in an ETF in a single trade, before it would impact the market for the underlying holdings. To calculate implied liquidity, analysis is done on each of the individual underlying securities in the ETF basket (a creation unit), and then one determines the size of the trade in the ETF that would be no more than 30% of the 30-day average volume of what would be considered the least liquid security in the basket.

In the snapshot below you can see that, based on this measure, the implied liquidity for a single trade in QRE is just over 18 million units or A$136m because the underlying basket in the ETF is comprised of the physical securities that comprise the S&P/ASX 200 Resources Index (with a total market cap of ~$360 billion as of 31 July 2017).

The 30-day average traded volume for QRE prior to 13 July was 33,500 units. However, in the trade below, you can see that 14.13 million units for a total consideration of over $86 million was able to be executed without issue. 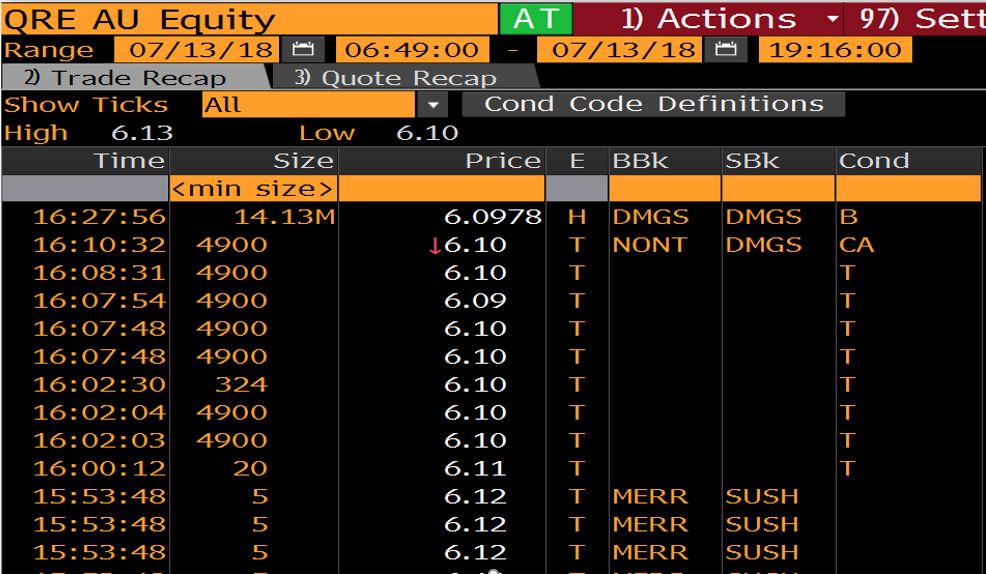 It is also worth noting that the market makers who offer on screen liquidity to investors don’t have any directional preference as to whether the investor is buying or selling. They hedge their exposure and make a small spread in the transaction. Therefore, the same liquidity should be available to investors on both the way in and the way out of their ETF position.

We saw this more recently with a similar sized trade into the newly listed BetaShares Australia 200 ETF (ASX:A200). On August 9 2018, A200 saw an institutional investor take a $100M position in the fund. Prior to this date, the 20 day average trading volume of A200 was just over A$1M a day.

With some misconceptions surrounding liquidity in ETFs, this trade is a practical example of how a seller was able to seamlessly exit a large position, at a price in line with other market trades. And did so with no discernible impact on the value of the fund, the underlying market or other unitholders in the ETF.