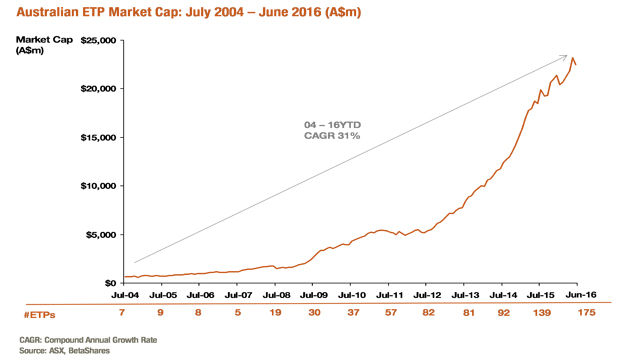 The Australian exchange traded fund industry grew by 5%, or $1.1B, during the first half of 2016, despite the challenging market conditions, ending the financial year with total funds under management of $22.5B. June was especially turbulent with the Brexit vote and the Australian election all adding to ongoing volatility. Investors continued to support ETFs by investing almost $1.4B in new money into the industry during the last 6 months meaning that all the industry’s growth this half has come from structural growth, with asset price declines actually being a net negative for the industry as a whole.

The industry continues to mature during 2016 with 16 new products added and 10 closed so far this year. We expect the number of new products to grow significantly during the last half of the year in what will be another strong year for product launches.

Gold exposures (physical gold bullion & gold miners) were the strongest performers for the first half of 2016.

Comment: Whilst the largest outflows came in Australian Fixed Income and Broad Australian equities we suspect both those outflows were the result of single institutional trades rather than broader market selling.