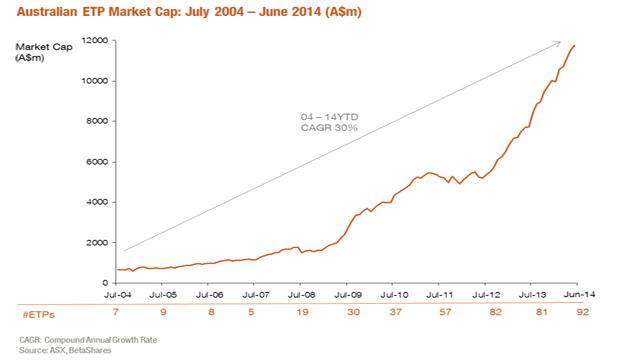 Comment: The industry continued to reach new heights, with a very impressive 12 month growth rate of over 50%. As you will see from the above, virtually all the growth in the half derived from net inflows, investors continuing to support ETFs notwithstanding little price growth in the markets. The future of the industry looks rosy and we retain our end of 2014 forecast of an industry size of between $13-$15B, with expectations at the higher end of the range.

Comment: Product development activity continues to be low, with only 3 new products launching in the period. However, we do not expect this low activity to continue, and  expect significant new launches in the second half.

Comment: Over the course of the half, investors were were particularly drawn to international equities, with ~$500m of net inflows into these products over the perioIn addition, high yield equities continued to be a major theme, attracting over $350m of net inflows. At a product level, income-oriented products were the most popular with BetaShares Australian High Interest Cash ETF (AAA) and BetaShares Equity Yield Maximiser Fund (YMAX) recording the #1 and #3 largest net inflows for the half. Vanguard Australian Shares Index ETF (VAS) recorded the second highest level of inflows for the same period.

Comment: Total outflows for the period were muted, largely confined to a single style based ETF, Russell Australian Value ETF (RVL) and ETFS Physical Gold (GOLD) as gold continued to be shunned by investors.