Global markets are still trying their best to “look through” the horrible economic data we’re now going through as a consequence of the COVID-19 lock downs.  Last week, another 6 million were added to US jobless claims and 700,000 Americans lost their jobs in March.  Yet a Trump tweet suggesting major oil producers (apart from the US!) might agree to cut production was enough to lift oil prices and even US equities for a time. China also reported an encouraging rebound in manufacturing and service sector indices in March as a result of some lifting in social distancing restrictions.  And at least according to official data, there’s been no second wave of Chinese infections!

Looking at the week ahead, a potential deal to cut oil production might provide some further reprieve to the oil market, but most experts suggest even a cut of 10 million barrels per day (the number suggested) will still leave the global market over supplied.  Wall Street has another opportunity to react to weak data with job (“jolts”) opening data on Wednesday and consumer confidence on Friday.  Markets may also start to focus on earnings as the Q1 earnings reporting season begins next week.

All that said, equities are still refusing to fall much further because of the hope that current restrictions will soon “flatten the curve” and allow restrictions to be lifted.  Yet I still suspect restrictions will linger for weeks – and possibly months – beyond a first wave peak in infections.  As we’re seeing in Singapore, moreover, restrictions can also be re-imposed if the virus comes back.  What’s more, markets are still yet to focus on the likely significant downgrade in the level of earnings over the next year or so.  We can also expect business and consumer caution to prevail for some time.  But such concerns may need to await attention until after we’re at least past the first wave peak in infections among richer nations.

Last week’s huge $130 billion wage subsidy now suggests the local unemployment rate will peak closer to around 8% than 15% in coming months- which will be considerably better than that likely in the United States.   Further good news is our infection rate is now also slowing, raising hopes that lock down provisions could also be lifted sometime soon.  In fact, our market has even tried to outperform the US market in recent weeks.

As noted above, however, the speed at which these restrictions can be lifted, and the speed with which the economy bounces back once they do, may well disappoint the market.  In fact, our earnings outlook was already weak prior to the virus outbreak, and hefty further downgrades seems likely in the weeks and months ahead.  While depression conditions may not last beyond a month or two, we’ll still be left with a nasty recession.

One highlight this week will be the Reserve Bank’s Financial Stability Review on Thursday.  Although much of the information will predate the virus crisis,  it may provide insights into the health – or otherwise – of bank, corporate and household balance sheets going into the current storm. 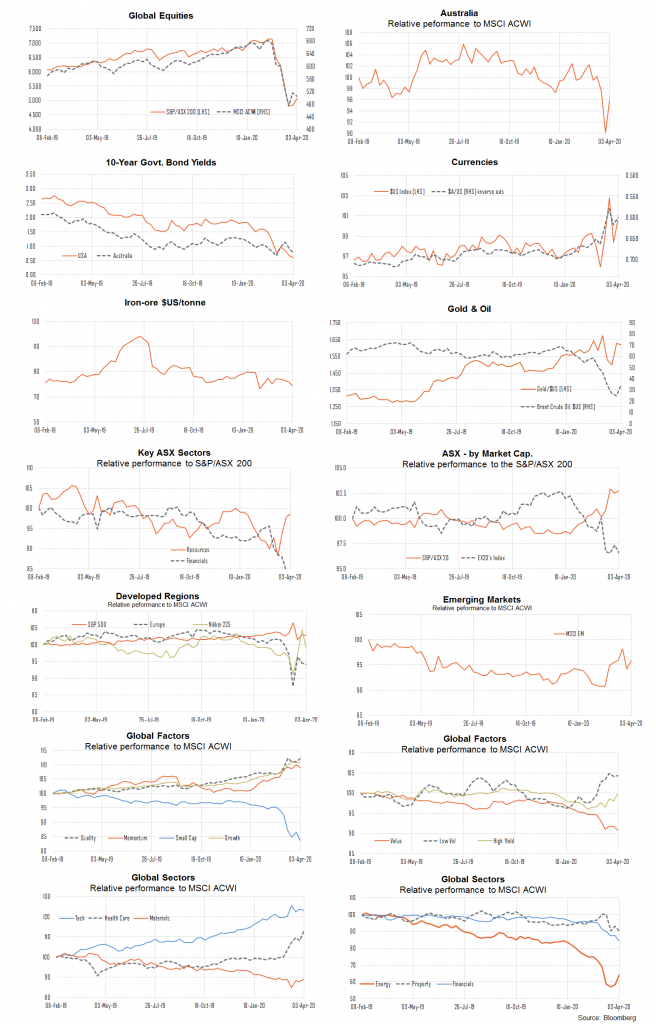