US President Trump’s decision to escalate the Chinese trade war – in an apparent response to 11th hour backtracking by China – was the major focus of markets last week, with the S&P 500 shedding 2%.  As of Friday, the US has lifted the 10% tariff on $US200b in Chinese imports to 25% and indicated plans to impose a 25% tariff on the other $US300b worth of Chinese imports.

All told, that amounts to a not insignificant tax slug equal to around 0.7% of America’s $US19 trillion economy that US firms must now pay should they wish to continue importing from China. Of course, some could switch to (presumably higher cost) alternative suppliers, and some Chinese exporters might elect to effectively pay the tariff by cutting their (pre-tariff) price charged US importers.  But in the main it will be US importers, and ultimately US consumers, that will bear the burden.  Meanwhile, China has vowed to retaliate.

That said, the potential market fallout has been limited by continued expressions of hope from both sides that a deal can be ultimately reached.

The other highlight last week was the RBA’s decision not to cut interest rates on Tuesday despite downgrading its growth and inflation forecast in Friday’s Statement on Monetary Policy.  Based on its past behaviour, the RBA’s revised forecasts (which were effectively based on market pricing of two rate cuts this year) should have been enough to justify a rate cut last week, and so it was a surprise (to me at least) that it did not act.  The RBA has, however, effectively lowered the bar for a rate cut – with failure of the unemployment rate to drop much further in coming months now likely to be sufficient.

As for last week, the fact the cash rate is already very low and there’s lingering hope that the labour market could remain surprisingly strong are some economic arguments as to why the RBA may have chosen to wait.  If so, that suggests a rate cut as early as June seems unlikely unless this week’s April labour market report produces a lift in the unemployment rate above 5%. By contrast, if the RBA does cut next month, even if the unemployment rate holds steady, it would be hard to escape the conclusion that it’s decision to hold rates last week reflected heightened political sensitivity to the current Federal election campaign, which in turn would be a startling departure from past RBA practise given it has previously moved rates during campaigns.

Of course, hope of lower interest rates supported the local market last week, with the S&P/ASX 200 shedding only 0.4% despite the escalation of global trade tensions.  The $A, meanwhile, has been left clinging to the US70c handle, though a decisive break lower seems likely over coming months.

Trade developments can again be expected to dominate market sentiment this week, with America’s move to lift tariffs on the other $US300b of Chinese imports and/or details of China’s retaliatory measures being potential negative events that the markets will need to digest. At the same time, however, ever-hopeful official comments suggesting “progress” in talks could limit the downside.  Data wise, US retail sales and industrial production will be closely scrutinised for any signs of a faltering economy.

In Australia, the Q1 wage price index on Wednesday and Thursday’s April labour market report loom large.  Annual wage growth is expected to hold steady at (a still very low) 2.3%, while  continued modest employment growth should be enough to also keep the unemployment rate steady (for now) at 5.0%.

Also out on Wednesday is China’s monthly “data dump” covering areas such as retail sales and industrial production – which should show the economy holding up reasonably well and increasingly benefiting from recent policy stimulus. 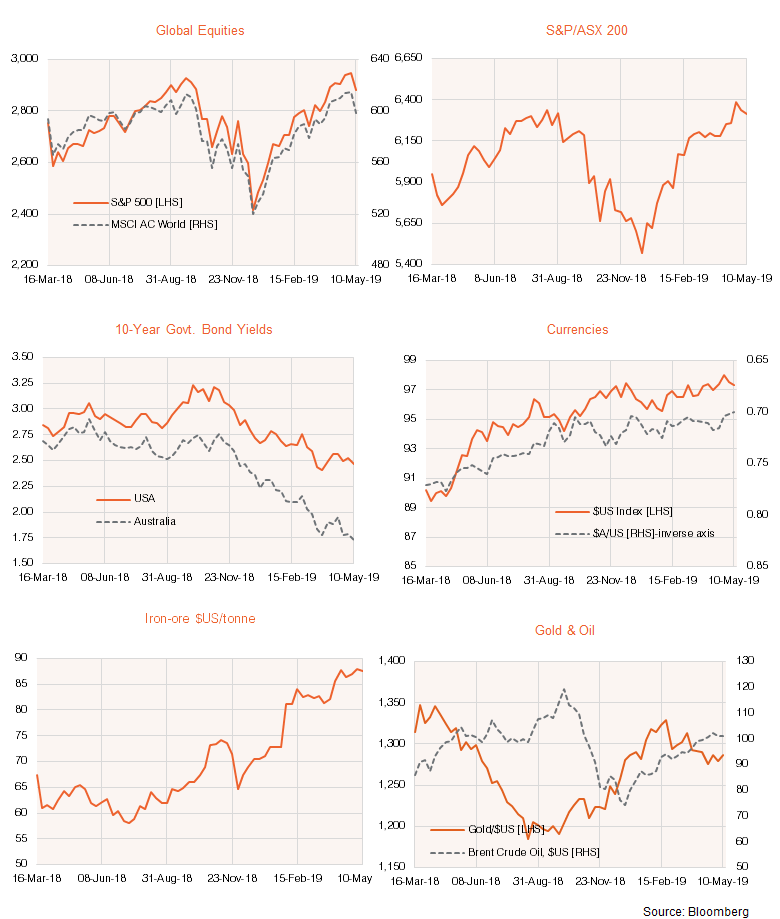