Global equities continued to shrug off concerns with regards to US-China trade wars last week, and instead were heartened by Trump’s Mexican deal, benign inflation data and growing hopes that the Fed will soon cut interest rates.  Equities edged higher and bond yields held at low levels.  Not even the attack on oil ships in a key trade passageway did much to upset markets.

This week the focus will be largely on the Fed, which meets on Wednesday.  While a rate cut is unlikely, traders will focus on any hints with regard to later rate cuts, given a move as early as July has now been fully priced by a hyped-up market.  I suspect the Fed will give markets at least partly what they want – signaling a rate cut is likely in coming months, though possibly not as early as July.

Also of interest this week will be several US manufacturing and service sector surveys, with traders on high alert for any clearer signs of a negative trade-war impact – if only so they can rejoice at an even greater chance of a near-term Fed rate cut.  As I’ve mentioned in recent weeks, we’re now in the upside down world where “bad news is good news”.

The local sharemarket enjoyed a strong week, pushing past recent highs to close up 1.7%.  Global equity market strength, the prospect of lower local interest rates, a weaker $A and strong iron-ore prices are all contributing to good gains across resources and yield plays like financials, property and utilities.  Indeed, abstracting from election effects, underlying economic data in Australia last week only affirmed my view that the RBA will likely cut rates again within the next few months.

Although the NAB business survey, for example, revealed a post-election boost in business confidence, actual business conditions finally dipped below their long-run average level in May.  Similarly, while there appears to have been an election related boost in part-time employment in May (all hired by Clive Palmer?), the unemployment rate held at the previous month’s elevated level of 5.2%.

In a key speech last week, the RBA also reiterated that it now considers “full employment” somewhat below 4.5%, or considerably lower than the current unemployment rate of 5.2%.

What’s more, with the Fed now likely to cut interest rates this year, I now see the RBA eventually cutting to 0.5% – with my anticipated timing being July, November and February.

Key developments in Australia this week will be likely further weakness in the official ABS measure of Q1 house prices tomorrow, and another likely dovish speech by RBA Governor Phil Lowe on Thursday. 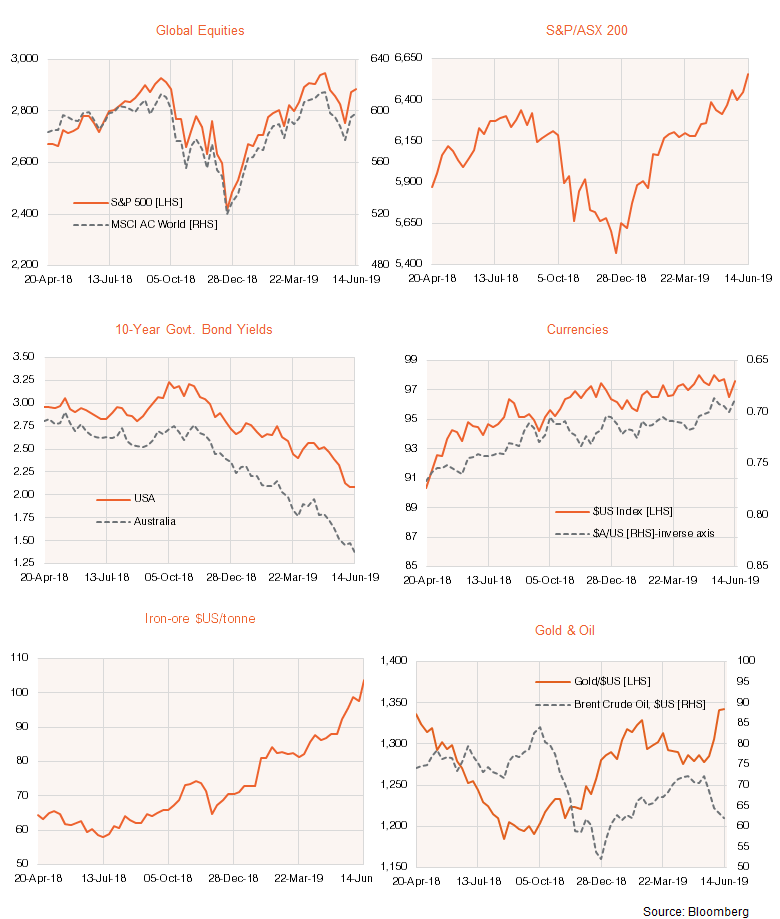