Last week was one to tell your grandchildren about. And for the younger people around the market, you’ve now been blooded with an example of just how volatile and cruel the equity market can be.  Each generation gets its own meltdown it seems and and now it’s the millennials turn.  It’s why equities outperform cash and bonds over the long-run – you are getting paid to endure the often wild ride!

But this is one for the record books – we’ve now had the fastest descent into a US bear market (20% decline from peak) in history, with the S&P 500 down 26.7% within 18 trading days at its low point last Thursday.  We’ve also seen broader liquidation and deleveraging develop, with  yields on even government bonds rising last week. Credit spreads have naturally widened also, with a move to cash also hurting gold.   My long held view that the $A would hit US 62c this year has been realised, albeit not for the reasons I expected.  My long held call of the RBA cutting the cash rate to 0.25% is next – and it could be as early as this week.  Why wait?

Signs of escalating coronavirus numbers in Europe and the US clearly unnerved investors last week.  Continued dithering over US fiscal stimulus, Trump’s surprise decision to ban European travel, and suspension of America’s basketball season also did not help.  As I write, the Fed has just announced a 1% cut to the Fed funds rate – ahead of its scheduled meeting on Wednesday – taking it back to a range of 0-0.25%.  Anticipation of such a move this week likely helps explain the US market’s huge rebound last Friday, and ironically the Fed’s early move has now denied the market any chance of a further (bear market) rally leading up to its appointed meeting on Wednesday.

While there’s some economic data in the US this week (retail sales and industrial production for February), most of this preceded the coronavirus outbreak so it not that relevant.  Otherwise, markets are now left to focus on a likely further rise in US coronavirus cases, further shutdowns in US economic activity and what, if anything, Washington can agree to in terms of fiscal stimulus.

Sadly, it seems only bad news awaits, and it will be interesting to see when and if selling exhaustion develops – once the market can no longer sell off on bad news, it’s usually a good signs we’re near a market bottom.  But I won’t hold my breath.  Just as this has been the fastest move into a US bear market in history, it could also prove to be the shortest.  But just for the record, the previous shortest bear markets have been around three months, and during US recessions – which now seems likely – the average market decline is around 35%.  The last two bear markets had declines of around 50%.

Both the NAB and Westpac respective measures of business and consumer confidence weakened last week as expected, though on a brighter note the Federal Government announced a clever fiscal package designed to reduce the chances of a negative June quarter GDP outcome.  Whether it’s enough to stave off a “technical” recession (i.e. two successive quarters of negative GDP growth) remains to be seen, but the economic road ahead will be challenging for at least several more weeks.  One specific concern regarding Australia is that we’re moving into the cooler “flu’ season, whereas at least in the US conditions should start to get warmer – which may limit the coronavirus outbreak to a relatively greater degree.

As in the US, we get some local data this week – February employment on Thursday – but which is now all but irrelevant given coronavirus concerns. Batten down the hatches, the bumpy ride is not over. 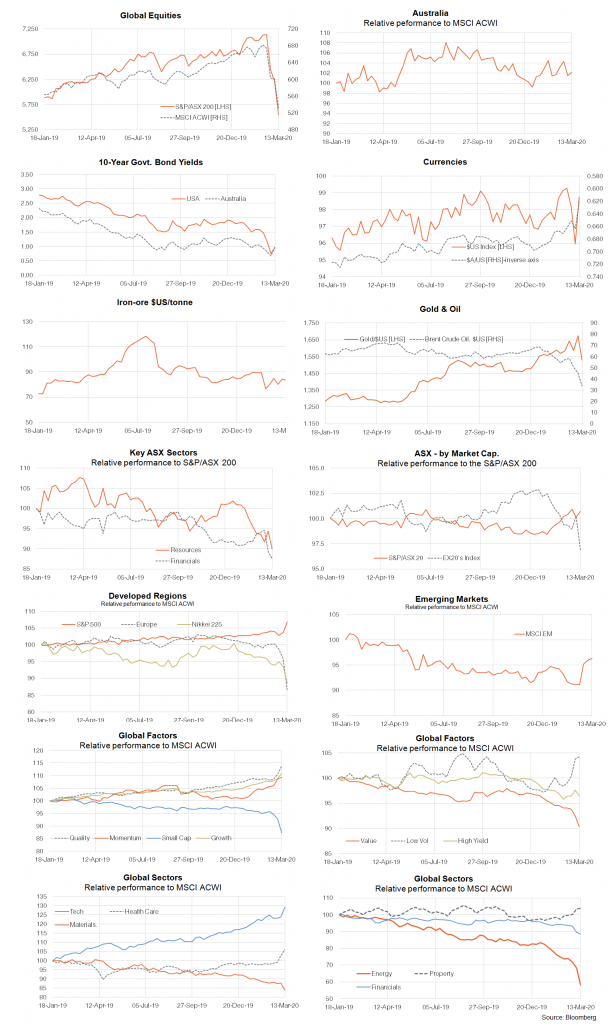