Global stocks remained in a upbeat mood last week, still basking in the after-glow of the US-China trade deal and continued encouraging signs of stabilisation in the global growth slowdown. US 10-year bond yields also had a chunky move higher, to be just under 2%, while the $US – along with gold and oil – remained firm.

While last week’s Markit US manufacturing index was a touch weaker than expected – and Europe’s still disappointingly quite weak – service sector surveys continued to display resilience. European industrial activity continues to be held back by the beleaguered German manufacturing sector, which is still adjusting to new environmental regulations in the car sector, and awaiting an upturn in global business investment.  US housing starts, meanwhile, remained firm – with the housing sector still revelling in the lower level of interest rates over the past year.

In China, the economy continues to hold up well, with industrial production and retail trade data for November both better than expected – though fixed-asset investment still remained soft.

In the UK, re-elected Prime Minister Johnson pushed through Parliament a bill to ensure there would be no Brexit extension beyond 2020 even if the UK had failed to negotiate an EU trade deal. While this potentially still leaves open the risk of a “hard Brexit”, markets at this stage seem to be counting on both the UK and EU striking a deal in time.

As would be expected, there’s little in the way of major data or events this week -with tonight’s US durable goods orders the only real highlight.

For a change, local economic data surprised on the upside last week, with a better than expected 40k increase in jobs in November (after a 24k slump in October), which helped push the unemployment rate back down to 5.2% – despite the participation rate remaining near record highs.  Home loan demand also continued to push higher, consistent with the recovery in established property demand since the RBA began cutting interest rates earlier this year.

That said, minutes to the last RBA meeting revealed the Bank still retains a firm easing bias, and it remains unwavering in its view that lower rates help more than hurt prospects of economic recovery.  All up, this still suggests there’s a good chance of yet another rate cut at the RBA’s first meeting of the year in early February.

As with global markets, there’s little on the local economic radar this week – with investors more focused on the holiday season.

What a change since last year!

Indeed, one can only marvel at what a different place we are today than this time last year!  The S&P/ASX 200, for example, actually touched bottom on December 21 last year, after having fallen by 14% from its highs in late August.

This time last year, markets appeared fearful of a trade-war induced global recession and were uncertain as to whether central banks – particularly the US Federal Reserve – would provide much insurance.

As it turned out, the trade war dragged on but the central bank cavalry arrived in time – and the US and China ultimately then saw sense in ending their protracted dispute. While we’re entering 2020 with more hope than last year, as is always the case, there’s never any room for complacency!

This is my last Bassanese Bites for 2019, with next installment not until Monday 3 February.  I wish you all the best for the festive season and hope the markets remain kind.  It will be interesting to see if the markets remain as hopeful as they are now when we next connect in just over a month’s time.

Have a Great Holiday Break! 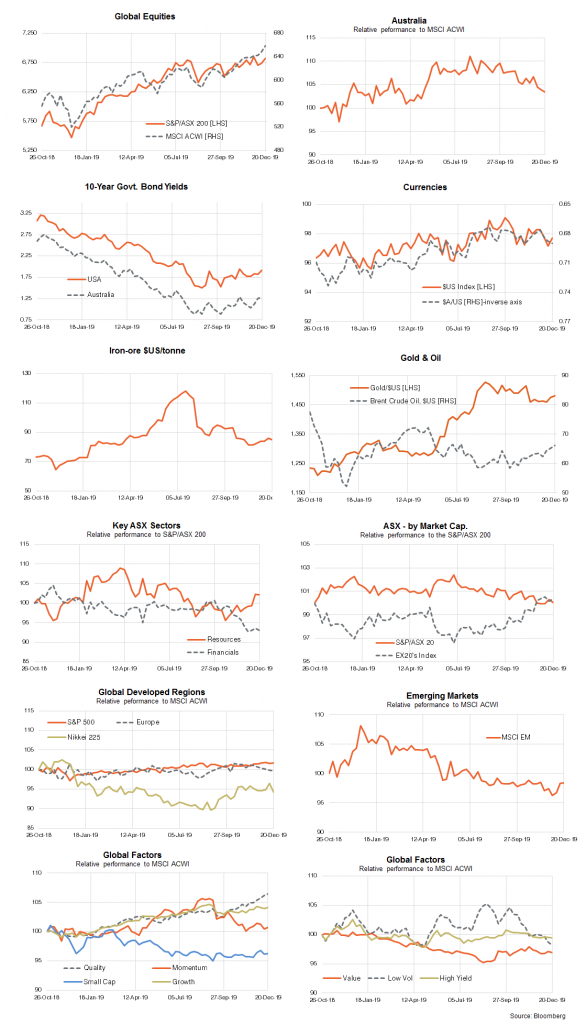