Of course, the highlight last week was the much better than feared U.S. May payrolls report, which revealed a 2.5 million rebound in employment (after 20 million job losses in April). The market – which was expecting 8 million further job losses due to continued weakness in industry surveys and jobless claims – got this horribly wrong! While some of the surprise employment result appears to reflect data distortions (some of the unemployed still considered themselves employed and new government incentives likely encouraged some re-hiring of workers even if they’re not being used) it’s also true that some business like bars and restaurants were allowed to at least partly re-open in May.

Let there be no mistake: we’re now in full-blown across-the-board risk-on mode – even long unloved ‘value’ sectors like financials and energy are rebounding, along with bond yields and emerging markets. Gold and the $US have, accordingly, retreated somewhat. As I’ve noted here for the past few weeks, the news flow seems likely to remain positive in at least the short term, with an initial heartening bounce in economic data as economies re-open. Longer-term concerns remain, however, reflecting the risk of a CV-19 second wave (not helped by recent massive street protests), a still likely sluggish economic recovery and now very high U.S. equity valuations.

The only other risk to markets is any potential talk of scaling back monetary or fiscal stimulus. In this regard, the Fed’s meeting on Wednesday – and Fed chair Powell’s press conference – will be of interest. But I suspect his main message will continue to be he’ll do “what it takes” to support recovery.

After lagging the U.S. equity market recovery, the local market has also started to rebound with vigour of late, especially now that major banks have joined the re-opening party. The resources sector is also especially benefiting from the strong rebound in iron-ore prices, due to both China’s demand improvement and CV-19 related disruptions to Brazilian supply. Associated with this, the $A recovered all of its losses during the CV-19 sell-off!

The major data highlight last week was the negative Q1 GDP result, which confirms Australia will almost certainly experience a ‘technical recession’ of two quarters of negative growth given that Q2 is likely to be very weak. On a brighter note, the RBA suggested in its post-meeting policy statement that the depth of Australia’s downturn might now be less than initially feared, given we tackled CV-19 so well and are re-opening the economy somewhat more quickly. The RBA did concede, though, that the strength of the recovery (which markets are not yet focusing on) could still be subdued. Indeed, even if we escape a second CV-19 wave, our old problems of weak household income growth, weak housing construction and tepid business investment will remain.

Data highlights this week include ANZ Job ads and the NAB business survey for May (both due today), and consumer sentiment and housing finance tomorrow. As we’re seeing globally, weak data associated with the lockdown will likely be disregarded, while any bounce in forward indicators like consumer sentiment will be warmly embraced. 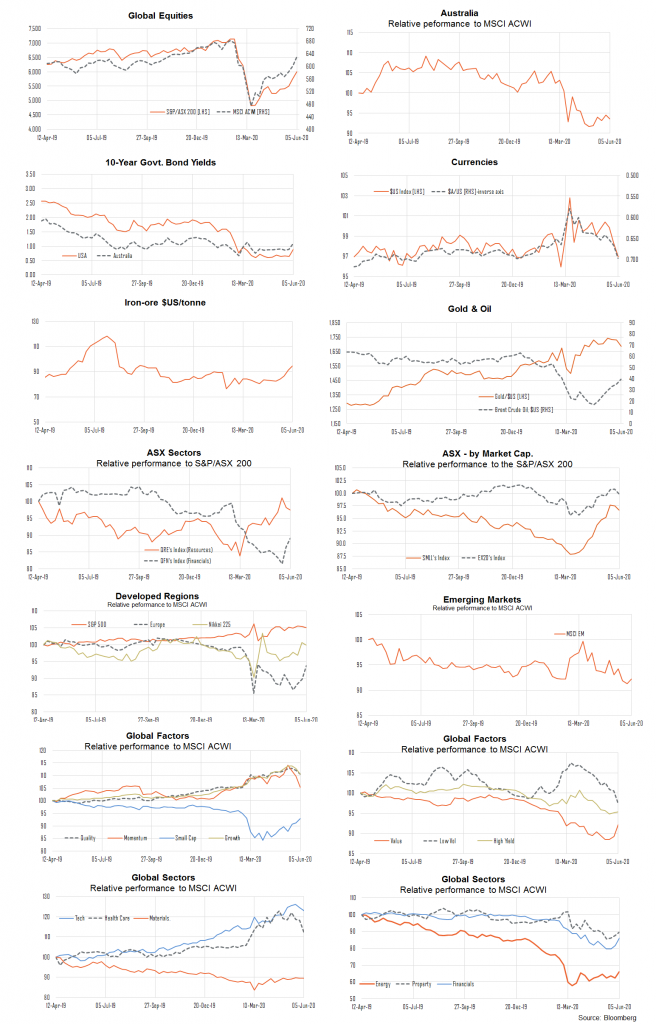