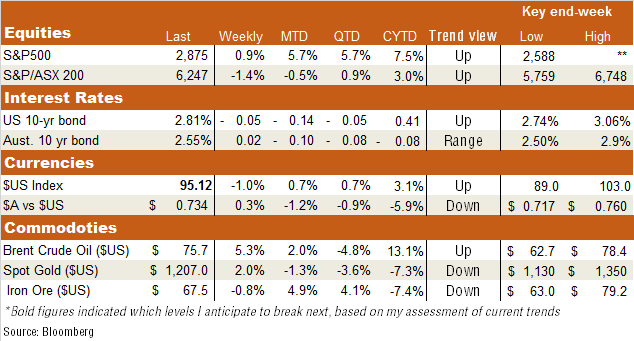 The key global highlight last week was the fact that Wall Street managed to touch new record highs on the back of reassuring comments from the Federal Reserve. Indeed, the S&P 500 lifted 0.9% last week, helped by a 0.6% rise on Friday following a speech by Fed chair Jerome Powell. Powell indicated the Fed is not wedded to any particular view on what the “natural” rate of unemployment might be, or even the “neutral” policy rate – but rather will simply continue to lift rates gradually to its current “rough assessment of neutral” as long as “strong growth in incomes and jobs continues.” Importantly, Powell indicated that “while inflation has recently moved up near 2 percent, we have seen no clear sign of an acceleration above 2 percent, and there does not seem to be an elevated risk of overheating.” (my underlining).

That’s consistent with my view that inflation in the US has rarely moved much higher than where it is at present over recent decades, and various structural forces suggest it’s unlikely to do so anytime soon. If I’m right, the Fed seems likely to lift rates twice more this year, and probably twice more in H1’19 – before potentially going on hold. That would be great news for the US economy and Wall Street. Meanwhile, oil prices bounced back last week on potential looming supply tightness due to new sanctions on Iran and strong underlying global demand. With the arrest of his former lawyer, Trump’s political troubles continued to simmer though are yet to unnerve markets – given the risk of ultimate impeachment remains unlikely unless the Democrats win back majority control of Congress following November elections. On the trade war front, last week’s first round of US-China talks ended with little result, while there were more encouraging rumours a US-Mexico deal with regard to NAFTA appeared imminent.

Locally, the obvious key (low)light was the bout of political instability which saw Scott Morrison emerge as Prime Minister. The S&P/ASX 200 dropped 1.4% over the week. Given there’s likely to be little change in policy, or little change in the still high expectation that Labor will win the next Federal election, I doubt there will be much lasting impact on either business or consumer confidence. In other news, the local earnings reporting season has so far failed to excite or disappoint all that much. Unlike in the US, our market rebound in recent months has been more driven by valuations rather than earnings – implying, while it may continue to be dragged up by the US market, its relative performance may soon face greater headwinds.

The US private consumer expenditure (PCE) deflator on Thursday will be the main data point of interest globally this week. As always, while an (unlikely) upside inflation surprise would be taken negatively by investors, the market expects annual inflation will edge up only modestly, from 1.9% to 2.0%.

In Australia, a key highlight will be Wednesday’s Q2 capital expenditure survey, which should continue to suggest an encouraging outlook for business investment. Specifically, the long decline in mining investment is finally bottoming out while there’s been a nice upturn in non-mining investment, thanks to infrastructure projects and growing demand for offices, hotels and healthcare facilities.