Wall Street officially entered correction territory last week – the second for the year – with the S&P 500 Index dropping a chunky 3.8%. While a further slump in oil prices was a contributing factor – hurting the energy sector – lingering trade fears appeared the main negative, following the failure of last weekend’s APEC meeting to even issue a communique.  It’s not often that Wall Street reacts to an APEC meeting, but such is the market’s sensitivity that the poor meeting result was taken as a bad omen for the likelihood of a deal between the US and China at this week’s G-20 meeting.

Last week’s drop in oil prices, in turn, partly reflected Trump’s decision not to sanction Saudi Arabia over the Khashoggi murder, which in turn suggests it will remain sympathetic to Trump’s desire for oil prices to stay low.  While this is good news for US consumers, Trump’s low petrol price crusade is less helpful to America’s shale oil producers who have once again ramped up production in the face of higher prices – only to see their efforts rewarded by oil prices slumping again.  It also doesn’t help that Trump’s long feared sanctions on Iranian oil exporters have, so far at least, been rendered a toothless tiger due to very generous exemptions.

In other news, while the EU and the UK Prime Minister agreed to a Brexit deal, its necessary passage through the UK Parliament seems far less assured, which keeps the risk of a messy “no-deal” exit early next year very much alive.

Two key global highlights this week will be the G-20 meeting and a speech by Fed Chair Jerome Powell.  The G20 takes place over Friday and Saturday and key will be whether the “side meeting” between Trump and Chinese premier Xi Jinping leads to any thawing in frosty trade relations. At a minimum, it’s hoped the two sides will agree to keep talking and Trump might announce a postponement of planned tariff increases in January.  If this tariff pledge remains in place, it risks a further major negative reaction in an already jittery market.

Before this showdown, however, markets will also focus on whether Powell (in a speech on Wednesday) joins the chorus of other Fed speakers over recent weeks that have hinted at a possible pause in the Fed rate hike schedule in 2019.  Powell’s last noted public appearance was hawkish, in which he argued rates were still a “long way from neutral.”   My sense is that Powell may not be as market supportive as some might hope, and will likely reiterate his confidence in the underlying strength in the economy – which, at a minimum, suggests another rate hike in late December remains on the cards.

In Australia, we’ll get key data on business investment intentions on Thursday.  While the Reserve Bank remains upbeat on the non-mining business investment outlook (especially office, aged-care and hotel construction), so far at least this has not been reflected in the official capital expenditure survey – which suggests subdued overall spending is likely in 2018-19.  If the RBA is right, a  reasonable upgrade in this survey’s non-mining investment outlook should be in the offing at some stage. 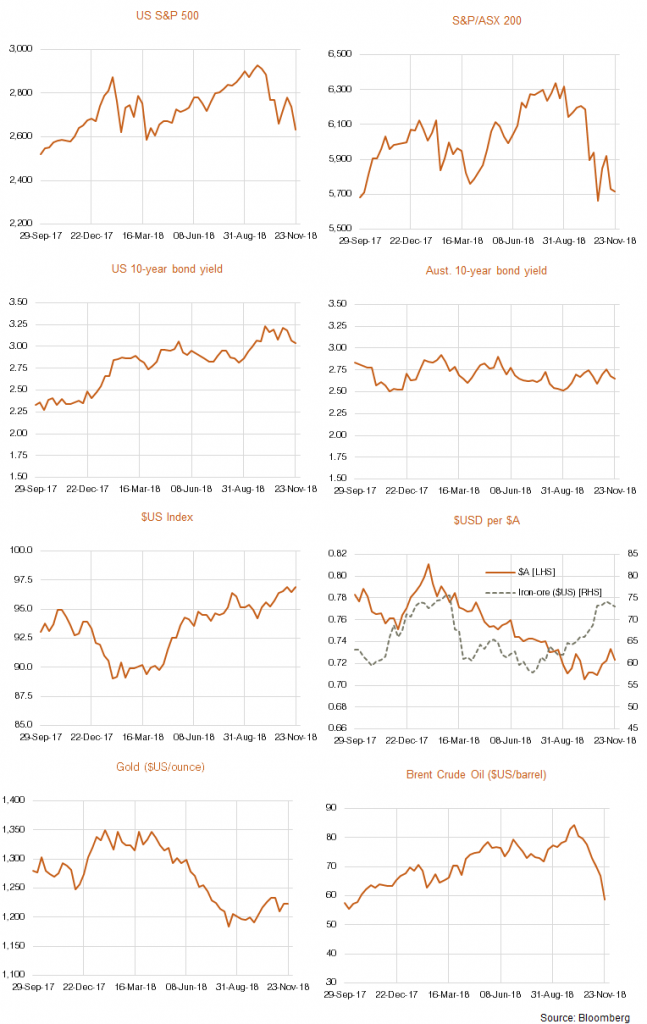