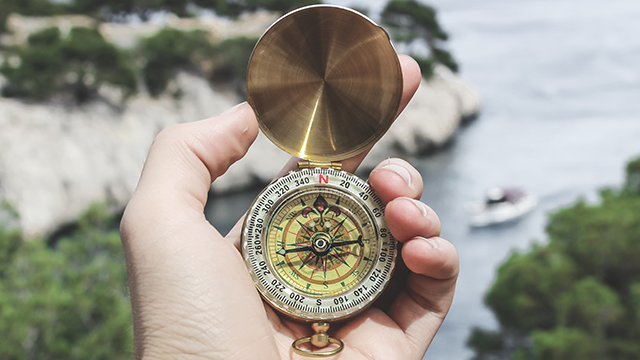 Global equities continued their rebound in May, after good gains in April, as interest rate and geopolitical risks eased somewhat, while the tail end of the US corporate earnings remained strong.

The MSCI All-Country Net-Return Index returned 0.8% in local-currency terms, after a gain of 1.8% in May. Forward earnings also rose 1.4%, implying the price-to-forward earnings ratio eased slightly from 14.9 to 14.8 – down from a recent high of 16.4 at end-January.  On a month-end basis, the MSCI Index is now down only 3.2% from its January peak. 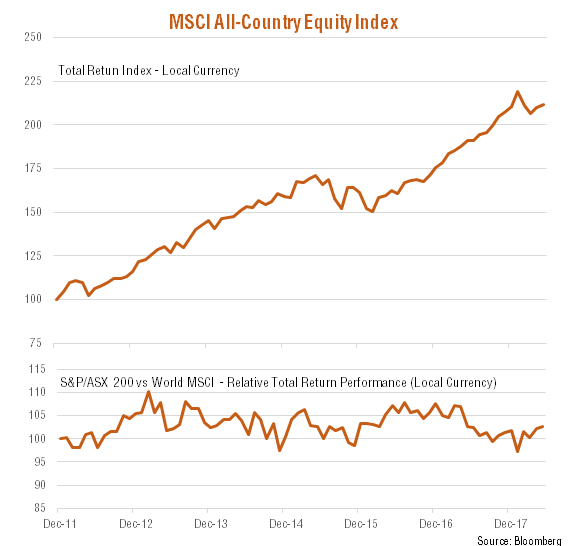 After struggling in April, the US market enjoyed particular strength in May, with the S&P 500 returning 2.4%, compared to declines in Europe, Japan and Emerging markets.  Australia’s S&P/ASX 200 also did well, returning 1.3%.

Despite the lift in equity markets, bond yields generally eased.  The US 10-year government bond yield fell from 2.95%  to 2.85%, as US inflation and wage data failed to provide red flags and the US Federal Reserve indicated it was still keen to lift rates only gradually.

Despite ongoing concerns with regard to US President Trump’s trade policies, the global backdrop for risk markets still remains fairly encouraging.  Importantly, key US wage and price indicators remain fairly benign – despite a tightening labour market – and the Federal Reserve still seems likely to lift rates only twice more this year, implying one further move after a widely expected hike this month.

Recent signs of slowing growth in Europe and Japan need to be watched, but appear to reflect a slowing to a more sustainable pace after relatively strong growth in 2017.  Korea tensions also appear to be dissipating, while OPEC and Russia seem likely to lift oil production soon to cap further (potentially demand destructive) gains in oil prices.

Indeed, with regard to the US economy, growth appears to have rebounded smartly in the June quarter, reflecting milder weather and stronger consumer spending.  That bodes well for continued solid strength in corporate earnings. In Europe, concerns with regard to Italy are also expected to ease, particularly as it still seems very unlikely Italy will leave the EU anytime soon. 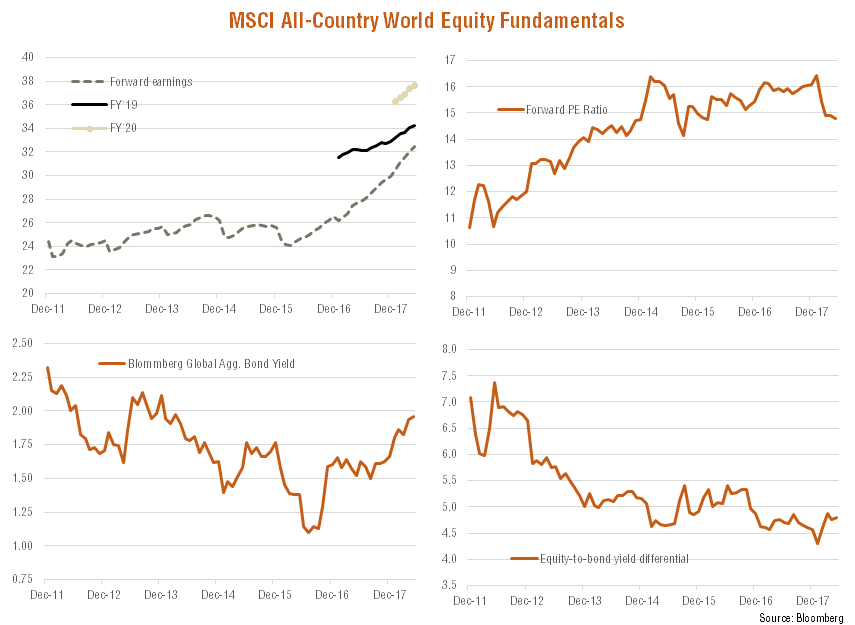 Among our key sector and regional exchange traded funds, technology and resources remain in vogue, with our NASDAQ-100 ETF (NDQ) producing the strongest return in the month (5.1%), followed by our currency hedged global energy companies ETF (FUEL) and our Australian resources sector ETF (QRE). 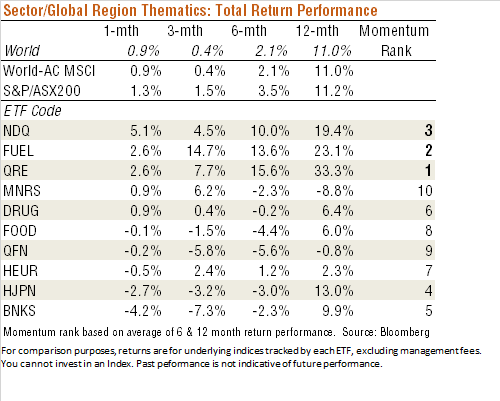 Based on a momentum ranking (an average of three and six-month return performance), the top-ranked product performers at end-April were QRE, FUEL and NDQ.