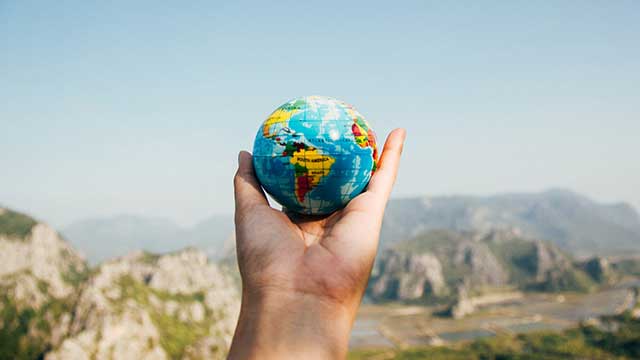 It’s been over 12 months since BetaShares launched a range of ETFs providing Australian investors with exposure to portfolios of sector specific global companies in a single ASX trade.

This suite of funds has been well received by our investors as a simple and low-cost way to access specific investment themes and sectors. With this in mind, and a year of performance in the books across the whole suite, we think it’s a good time to look at the year in the rear-view mirror and discuss how each of the investments has performed in the 12 months to September 2017. So let’s get into it, in order of performance from worst to best:

Despite a number of strong months throughout the year, MNRS is currently down 17.61% for the 12 months to September 2017. The gold mining companies held in the underlying index have operating leverage to the gold price, so will often provide more magnified returns (positive and negative) to gold price movements.

That said, tactical investors who have held the fund for shorter time periods have still managed to obtain positive performance. For example, in January the fund posted a gain of 10.97% for the month following a surge in the gold price – again relating to the Trump administration. MNRS was also our top performing fund in August, with a gain of 7.20% during a month of US/North Korean tension that pushed gold bullion to its highest price since the U.S elections in November 2016.

Importantly, MNRS is currency hedged. The Australian dollar has historically been correlated to movements in the gold price, so in a circumstance where gold rallies at the same time as the AUD, investors should be protected from the erosion of the returns that may otherwise be expected due to currency movement. In January, for example, MNRS outperformed a similar but unhedged gold miners exposure by 2.00% over the month.

It has been a volatile 12 months for energy companies, as the price of WTI Crude Oil has fluctuated in a range between 40 and 55 USD/bbl. – with the U.S. shale industry capping the upside and OPEC attempting to manage the downside.

FUEL was actually BetaShares’ top performing fund for the month of September 2017, posting gains of 8.45% for the month as it appeared that markets were finally gaining faith in the willingness of OPEC members to comply with output cuts. Looking ahead, the question remains whether U.S. Shale producers are able to once again ramp up supply in response to higher price or has the profitability of the industry become questionable enough that drillers may struggle to raise capital.

HACK aims to track the Nasdaq CTA Cybersecurity Index* and provides investors with exposure to a portfolio of companies that are engaged in the highly topical business of protecting computer software, infrastructure and networks from cybercrime.

As the only of our global sector funds with currency exposure, HACK drifted from its mid-year highs following a period of USD weakness but still remains up a healthy 7.80% for the last 12 months – a period which saw a number of high profile cybercrimes, including the WannaCry Ransomware attacks, highlighting the potential vulnerability of our increasingly digital industries and personal lives, and the evolving sophistication of cyber criminals.

With Cyber-attacks becoming more frequent, commerce becoming more digitalized and the emergence of new technologies such as the Cloud, Blockchain and the Internet of Things – the need for secure data is driving demand for constantly improving security solutions. While cybercrime growth makes it difficult to accurately forecast spending growth, it has been anticipated by research and advisory firm Gartner that spending on information security products and services will grow at 7-8% CAGR through 2019.

The Healthcare sector (as well as the banking sector, more on that below) received a major boost following Trump’s surprise election victory – having drifted for most of the prior year under the Democratic threat of reform and pharmaceutical controls.

Earlier this year, Trump met with a number of key pharmaceutical executives, with the meeting primarily focused on the President’s request for lower drug prices and for increased drug manufacturing within the U.S. In return, he vowed to ease regulations and accelerate the approval process for new medicines.

U.S. healthcare stocks still hold a forward P/E ratio of 17.8 versus the S&P 500 forward P/E ratio of 19.4. Historically, U.S. healthcare stocks have tended to trade at a premium to the broader market, so this may still present a value opportunity if you have a positive view on the sector. If you do have interest in this space check out more details on the DRUG webpage.

Globally, farming and agribusiness companies are helping solve the challenge of feeding an ever expanding population with decreasing arable land. At the same time the majority of the world’s population growth is occurring in less developed countries.  With clear data linking per-capita income levels with per-capita consumption of key agricultural products it could be argued that rising living standards in many of these nations could further drive demand growth. Among FOOD’s top holdings are companies engaged in farming machinery, seed and fertilizer, and packaged food and meats.

The investment performance of the global agricultural companies in the index FOOD aims to track has been relatively strong over the past decade, even in the face of relatively week food prices from early 2011 – outperforming the MSCI World Index in AUD terms by 6% p.a. over this period. This trend has continued over the last 12 months, with food prices once again rising from mid-2016, providing an earnings boost for many of the underlying companies in the FOOD index which have leverage to the food price cycle. 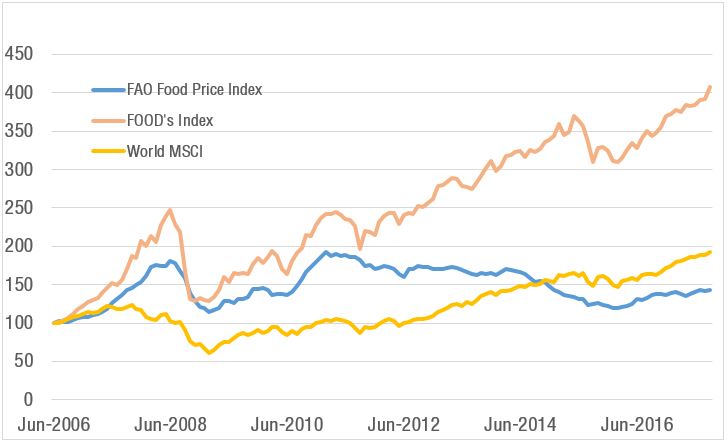 Source: Bloomberg. Past performance is not an indicator of future performance. You cannot invest directly in an index.

A number of tailwinds appeared to converge over the last year for the long-suffering global banking sector – which in the U.S. alone has underperformed the S&P 500 Index by close to 40% over the past 8 years.

The Banking sector globally has historically been one of the top performing sectors in a rising interest rate environment – rising rates are seen as a sign of a strong economy and are beneficial for banks’ net interest margins and organic earnings growth.

Looking at the banking sector itself, better than expected results from US stress testing in June, which is required under the Dodd Frank Reforms, have shown strong balance sheets across the industry and raised expectations for increased shareholder returns via accelerated share buybacks and dividend hikes. In Europe, regulators have also helped consolidate the banking system in both Italy and Spain, which should further assist with the ongoing recovery in the region.

Banks have also been seen to be one of the key beneficiaries from the Trump administration’s proposed corporate tax cuts and received a big boost in late 2016-early 2017 on the back of Trump’s election victory. The possibility still remains for reduced banking regulation in the US under the Trump administration – with Trump previously having vowed to dismantle Dodd-Frank.

*NASDAQ OMX®, and relevant Index registered trademarks, and certain trade names are registered trademarks of NASDAQ Inc. (which with its affiliates is referred to as the “Corporations”) and are licensed for use by BetaShares. The Funds have not been passed on by the Corporations as to their legality or suitability. The Funds are not issued, endorsed, sold or promoted by the Corporations. THE CORPORATIONS MAKE NO WARRANTIES AND BEAR NO LIABLITY WITH RESPECT TO THE FUNDS.