Last week saw the first decent pull back in global equity markets since the impressive V-shaped recovery began just after Christmas.  Growing uncertainty over when and if the US and China will actually conclude a trade deal weighted on sentiment, as did more concerns over slowing global economic growth.  Despite Trump’s ongoing optimistic tweets, US negotiators appear to be downplaying the chances of any near-term deal with China being finalised, while the Chinese appear to have put off the talked about end-March “Mar-a-Lago” meeting with the US President.  With Trump having already postponed the March 1 deadline for higher tariffs, China may well have decided to call Trump’s bluff – and is hardening its resolve against making major trade concessions.

In terms of global growth, the ECB finally accepted reality and acknowledged the EU’s slowdown since last year is more than just transitory.  The ECB slashed its 2019 growth forecast from 1.7% to 1.1% and conceded its long planned year-end rate rise won’t now probably take place. Growth in Chinese exports and imports were also weaker than expected, though the timing of holidays appears to have been a partial factor.

In the US meanwhile, data was more mixed: there were further signs that the drop in bond yields is working to resuscitate the housing sector, with good strength in new home sales.  The service sector PMI was also strong.  February jobs growth, however, was much weaker than expected, through this can be partly attributed to poor weather and payback from unusually strong employment growth in the previous few months.  Tellingly, the unemployment rate dipped and annual growth in average hourly earnings edged higher to 3.4%.

In Australia, the highlight of the week was the very soft 0.2% Q4 GDP result – reflecting weakness in home building, consumer spending and business investment – partly offset by ongoing strength in public investment.  Sadly, the outlook does not look much more encouraging, given the downturn in housing activity is just gathering steam and the business investment outlook is fairly subdued.  Note ANZ monthly job ads also declined for the 4th month in a row, pointing to a likely uptrend in the unemployment rate within coming months.  Local 10-year bond yields continued to trend lower, while the Australian dollar is testing the low end of its recent range – each could easily break 2% and US70c respectively over coming weeks.

An ever hopeful (desperate?) market will continue to look for signs of a US-China trade deal, with China’s monthly “data dump” being a key data highlight on Thursday. Recent trends suggest China’s retail spending and industrial production will likely remain (relatively) soft, which could play into growing global growth concerns.  US retail sales and German industrial production will also be closely observed, especially as US retail spending was surprisingly soft in December and there are hopes German manufacturing can soon start to recover after weakness last year.

In Australia, there will be interest in whether tomorrow’s National Australia Bank’s monthly business conditions index continued its recovery in February – after a sharp slump in December and a less than convincing partial recovery in January.   The omens are not good, with the NAB Economics team last week becoming only the second from the major banks (after Westpac)  to call for RBA rates cuts this year.  My rate cut call was made a month ago. 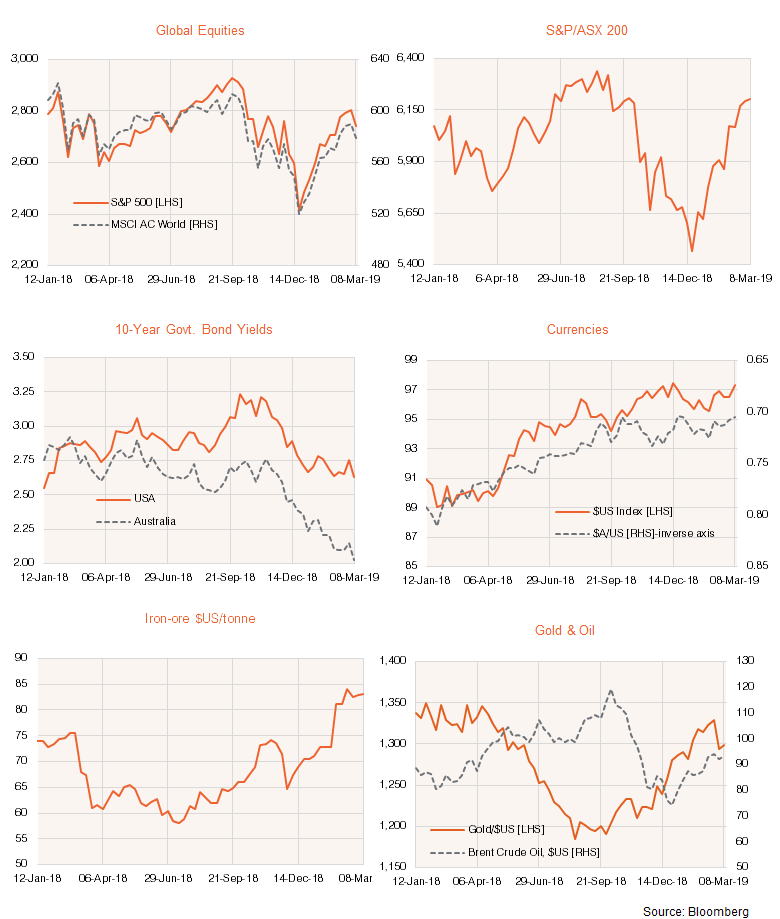