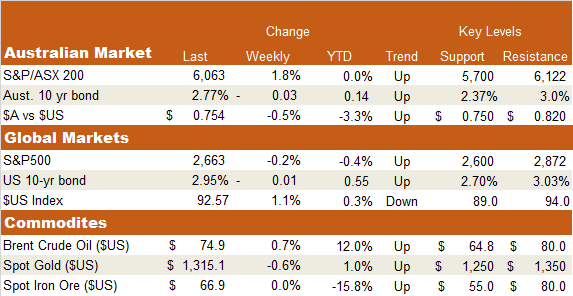 Simmering trade tensions and Fed fears meant global equities were generally subdued over much of last week, but ended with a bang after Buffett decided to take another bite of Apple and US wage growth remained benign. America’s S&P 500 surged 1.3% on Friday but ended the week down 0.2%. US earnings results remained generally upbeat, with Apple being just the latest tech giant to surprise on the upside. US economic data tended to confirm the economy remained solid with inflation edging up only gradually (leading the US Fed’s San Francisco president John Williams to describe the US last week as a “Goldilocks economy”).

Indeed, America’s core private consumption deflator (the Fed’s preferred inflation measure) met market expectations, lifting to an annual 1.9% rate in March. Although the US unemployment rate edged down to 3.9% in April, average hourly earnings growth rose only 0.1% and 2.6% for the year. The Fed, meanwhile, left rates on hold as widely expected and, by noting its inflation target was “symmetrical”, tried to hose down fears that it would get a lot more aggressive in raising rates as core-inflation neared its 2% target, i.e. it could tolerate inflation rising a little above that target for a while, just as it tolerated inflation remaining below target for some time.

More worrisome remained the simmering trade tensions. Trump’s May 1 deadline for raising steel and aluminium tariffs on European imports was pushed back a month, and his Chinese trade delegation appeared to leave Beijing empty handed over the weekend. Tensions with Iran are also helping push up oil prices (and hence inflation risks). Given the sheer strength of the US economy, Trump’s aggressive trade approach is sadly both unhelpful for global markets and completely unnecessary – or at least badly timed – for America’s own economic needs.

The Australian market was much stronger last week, with the S&P/ASX 200 up 1.8%, with both resources and financials doing well. One emerging global theme is $US strength – reflecting Fed rate hikes and the sheer relative strength of the US economy – which in turn has helped non-US equity markets outperform of late. There’s also a local hope that the “worst is over” for our beaten down financial sector. Also supporting the local market was further soothing rhetoric from the Reserve Bank’s monthly statement and quarterly report suggesting its not about to raise rates anytime soon.

There’s only a smattering of notable global data this week, with the US core-CPI being the highlight on Thursday. This is likely to show annual core inflation edging up further, from 2.1% to 2.2%. The issue going forward is whether US inflation keeps accelerating, or starts to level out around this level – I’m backing the latter, which should constrain the lift in bond yields and downward pressure on equity markets.

Locally, Tuesday’s Federal Budget will be a highlight, with the prospect of income tax cuts and an earlier projected return to surplus (reflecting stronger tax revenues) providing a possible mid-week boost to investor sentiment. NAB’s monthly business survey is also due today and retail sales tomorrow.