Global equities enjoyed another solid week, basking in the after glow of the US-China trade “truce” announced last weekend and continued “Goldilocks” US economic reports – suggesting the economy is soft enough to justify a rate cut later this month, but not so soft as to raise fears of recession.  Bond yields were steady while the $US firmed – taking the edge off gold prices.  Opec’s decision to extend production cuts were in line with expectations, with oil prices easing over the week.

As for the US economy, last week’s ISM manufacturing index typifies the “just right” nature of current economic data, with the index easing to a three-year low of 51.7 in June (from 52.1) – suggesting slower but still reasonable growth in this key sector despite ongoing trade tensions. The ISM services sector index, meanwhile, hit a two-year low of 55.1 – which is still consistent with good growth.

And of course, capping off the week was the US payrolls report, which revealed much stronger than expected employment growth (224K vs 160 expected) yet still benign annual wage growth, which held steady at 3.1%.

The key focus this week will be what Fed Chair Powell makes of recent developments, as he’s due to deliver his semi-annual Congressional testimony on Thursday.  Minutes to the previous Fed meeting are also released on Wednesday.  All up, the Fed is likely to reiterate that it will “act as appropriate”, which should be enough to keep month-end rate cut hopes alive – as both insurance against a deeper trade-induced economic slowdown and because wage and prices pressure remains stubbornly benign.  Market expectations for a large 0.5% cut, however, have rightly been wound back over the past week – the Fed will be generous, but not that generous!

Trump of course clamours for immediate rate cuts, and must have looked enviously at Turkey on the weekend, after President Erdogan unceremoniously sacked the central bank governor by Presidential decree for not, it seems, cutting interest rates quickly enough.

The RBA cut rates last week as most economists (myself included) had come to expect, though the statement did imply the Bank will now likely pause for at least a few months to assess how the economy responds.  Also noteworthy, the Federal Government succeeded in getting its tax package passed, which will deliver around $8 billion in tax credits to households over the next few months.

With both monetary and fiscal policy providing support, it reduces the “tail risk” of a local recession, though it still seems likely growth will remain sluggish for a time – if only because the labour market is finally beginning to slow after several years of impressive strength.

Against this backdrop, we’ll get important updates on local business and consumer sentiment from the respective NAB and Westpac surveys this week. Given the end of election uncertainty, and the RBA’s aggressive back-to-back interest rate cuts, there is a very good chance that both business and consumer confidence could display a heartening bounce.  That said, the surveys will not reflect the passage of the Federal Government’s latest tax cut package – which is likely to boost sentiment in the follow up surveys. What’s more, there’s also a chance the RBA’s aggressive actions could have perversely spooked sentiment – we’ll see!

Even allowing for a boost in economic sentiment, however, this is still unlikely to discourage the RBA from cutting interest rates late this year – especially given growing signs of a softening in the labour market outlook. Indeed, we’ll likely be reminded of the weakening jobs outlook with the ANZ job ads survey on Monday, which has already began to display a weakening trend in recent months.

Other research of mine in the past week include on updates on local equity valuations and unfinished business with regard to tax reform. 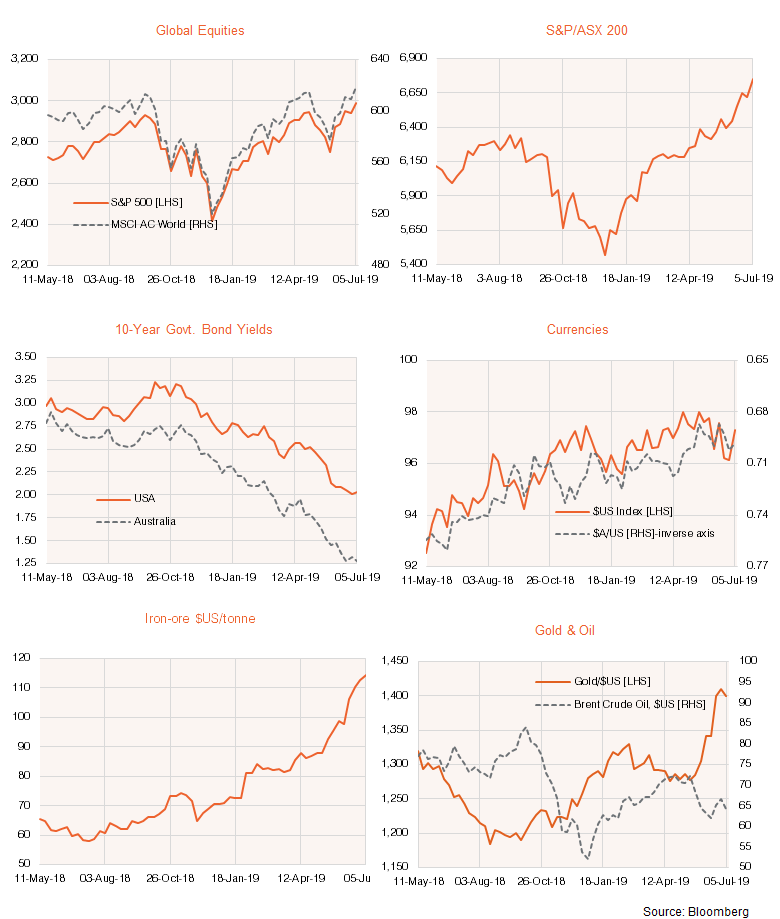