Global equities continued their recovery last week, helped by apparent relief that US mid-term elections restored “gridlock” to Washington.  With the Democrats controlling the House and the Republicans controlling the Senate, it seems unlikely either side of politics will be able to push through regulations to seriously affect the outlook for a range of sectors, from health care to technology.  There was also some relief that the Democrats did not manage to wrest control of the Senate, as this would have raised the risk of Presidential impeachment and a potentially more serious assault on cosy corporate practises.

The Fed and RBA meetings came and went, with no change to the interest rate outlook in either country. The upbeat US earnings season also rolled on.  The other major market development was a further slump in oil prices – to test mid-August oil price lows.  This likely reflects a market that had become overly bullish due to impending Iran sanctions – only to then get wrong footed by signs of higher supply in both the US and Saudi Arabia and less draconian Iranian sanctions (at least in the short-term) than expected.

In Australia, the RBA continued to strain its credibility by producing another upbeat outlook for the economy, despite growing evidence of a serious downturn in housing activity and home prices as we head into 2019.   We’ll see! It’s just as well the RBA is not backing up its upbeat outlook by threatening to raise interest rates anytime soon.

Key data highlights this week include the US consumer prices index report and retail sales.  Sales are expected to bounce back after a subdued September, while annual core CPI inflation should remain contained at around 2.2%.  Otherwise, the final wave of US earnings reports will be unleashed, dominated by the large and (generally struggling) traditional retailers. China’s monthly “data dump” also lands on Wednesday, and seems likely to show further softening in the world’s second largest economy.

In Australia, we get a smattering of interesting data, including surveys of business and consumer sentiment, employment and wage growth. Most focus might be the extent to which Wednesday’s Westpac consumer sentiment report holds up in the face of further negative reports on Sydney and Melbourne house prices, given that this is now placing some downside risk on consumer spending next year.  Helped by a minimum wage increase, annual growth in the wage cost index on Wednesday index should lift from around 2.1% to 2.4% – which would support the RBA’s view that wage growth is at least heading up, albeit still fairly slowly.

As seen in my (new) weekly chart pack below, the recovery in equities in recent weeks has been associated with a rebound in the $US, and a correction in gold and oil prices – but not iron ore prices, which have continued to strengthen, which in turn has helped support the $A.  Long-term bond yields, meanwhile, have remained relatively steady. 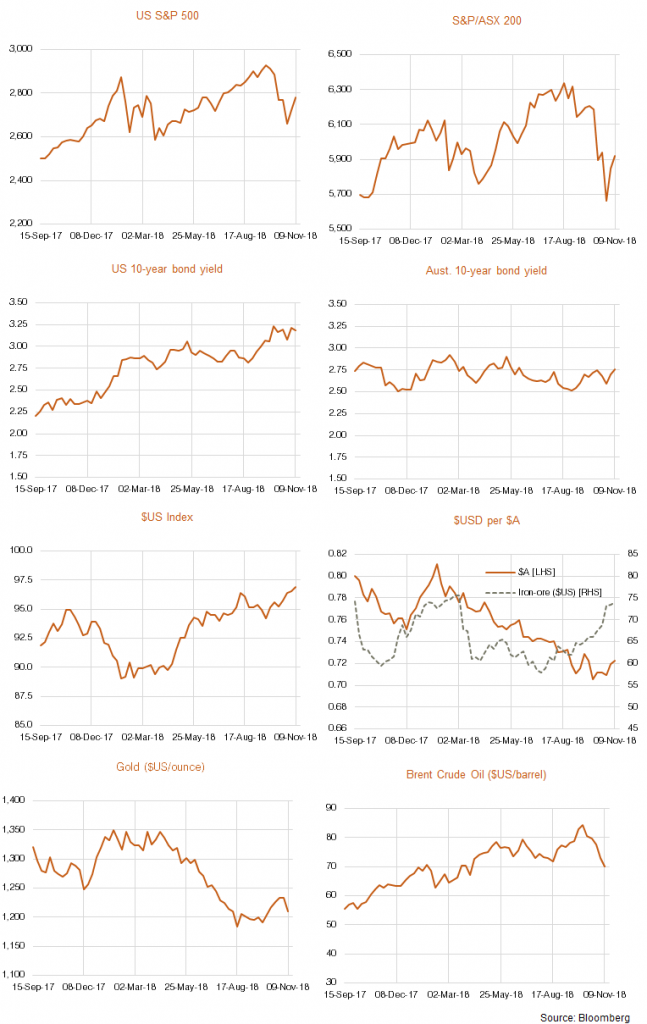