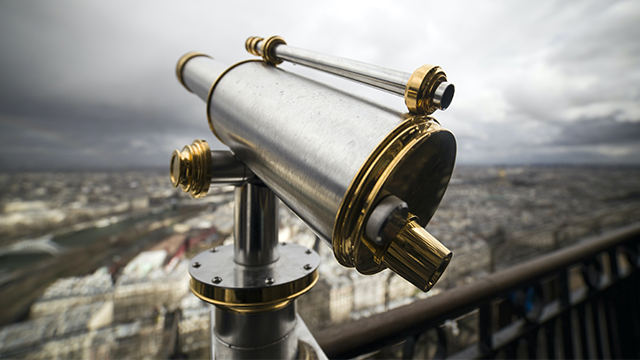 Global stocks have staged a relentless rally in recent months even in the face of arguably the worst economic conditions since the Great Depression. While there are many potential explanations for this apparent disconnect, low global bond yields and a “don’t fight the Fed” mentality seem the strongest factors.

As seen in the chart below, after a spectacular 34% decline over February and March, the S&P 500 has enjoyed an equally spectacular 44.5% recovery to its recent high on 8 June. As at the time of writing (23 June), the S&P 500 was only 8% below its peak level on 19 February.

Why has the market rebounded?

Let me suggest a few factors:

Of course, a rising market together with falling earnings has meant that price-to-earnings (PE) valuations have increased considerably. As I’ve previously alluded to, the U.S. market risked trading at PE valuations not seen since the late-1990s dotcom bubble if market prices held up while earnings fell.

The current situation with respect to the all-important U.S. market is outlined in the chart below. As evident, forward earnings have declined in recent months in line with downgrades to the expected level of market earnings in 2020 and 2021. Along with the rising market, it has meant the market’s price-to-forward earnings ratio has increased to around 22 times earnings, compared with 19 at the market peak in mid-February. 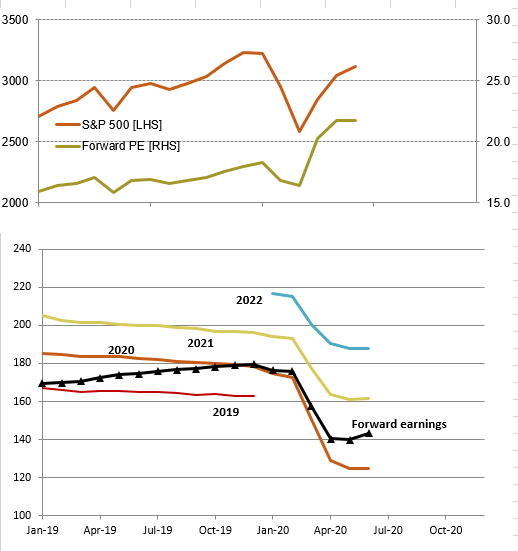 In recent weeks, however, there’s been some stabilisation in analyst earnings expectations (as surveyed by Bloomberg). Whether this lasts remains to be seen (more downgrades could come during the likely bleak Q2 earnings reporting season and/or if significant new lockdowns are imposed). But as it stands, 2021 earnings are presently expected to rebound by 30%, after a decline of 23% this year, leaving  the level of earnings close to that of 2019!

To my mind, this still seems overly optimistic, but if it holds, then at an S&P 500 level of 3,117, the price-to-forward earnings ratio at year-end (since at year-end forward earnings will equal then-expected 2021 earnings) will be 19.3 – which is still well above its long-run average, and close to what it was at the market peak in mid-February.

If earnings expectations don’t decline further, however, forward earnings should continue to gradually rise through 2021, which could help lower PE valuations further – provided this is not offset by continued strong equity price gains.

Another factor to consider is the still incredibly low level of bond yields, and central bank commitments to keep yields very low for as long as necessary to encourage economic recovery. Indeed, U.S. 10-year government bond yields have dropped from an already very low 1.8% p.a. at the start of the year to only 0.7% p.a. (as at 23 June).

Helping in this regard is the fact that global inflation also remains very low – in a sense, low inflation allows central banks the ability to engage in extreme monetary measures with as yet little apparent cost (at least in terms of their key mandate, consumer price stability!).

Low bond yields, if sustained, raise questions marks over what the fair-value PE ratio might be going forward. As seen in the chart below, the outright S&P 500 PE ratio is now at its highest level since the dotcom bubble. That suggests caution. 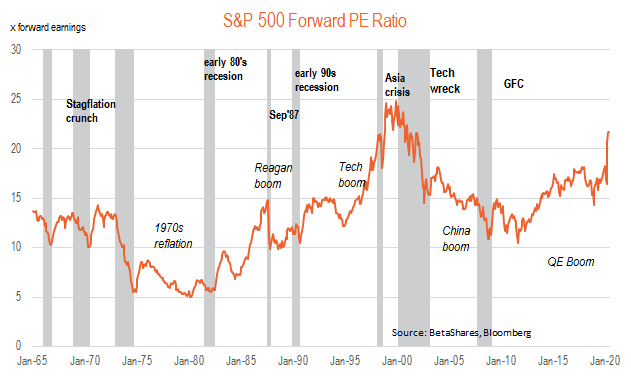 But on the other hand, given the structural decline in interest rates, equity valuations relative to bond yields are not so obviously expensive from a long-run perspective. As seen in the chart below, the forward-earnings yield (inverse of the forward PE ratio) to U.S. 10-year government bond yields is currently around 4% p.a., which is at the lower end of its range of recent years, but only modestly below its post-GFC average of 4.3% p.a. and still well above the 55-year average of around 2.5% p.a.*. 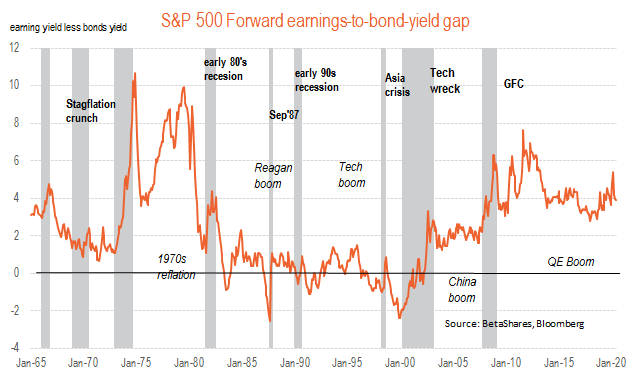 All up, given likely persistent low bond yields, and the market’s apparent comfort with current high equity valuations, investors need to be open to the possibility of a potential equity market re-rating or ‘melt-up’. By way of example, if U.S. 10-year bond yields held for a while at 1% p.a., and the equity-to-bond yield gap returned to its 55-year average of 2.5% p.a., the U.S. S&P 500 could potentially hold a PE valuation of 28!

Indeed, this was a medium-term risk I considered possible prior to the virus crisis, but had thought what now appears a devastating U.S. recession would not see this arise anytime soon. But we need to be open to the possibility that extreme and persistent monetary stimulus (unburdened by the fear of inflation) could have brought forward an impending market re-rating.

Of course, rising equity prices are good news for investors who currently own stocks. But the reality is that high valuations are effectively also lowering longer-run expected equity returns – as adjustment to the fact long-run bond returns have also been lowered.