The key question folks: have we seen the low or was last week a bear market rally?  Despite horrible US economic data and an acceleration in their  COVID-19 cases, the US S&P 500 saw fit to stage it’s strongest three-day rally since 1931 – after dropping 34% from its peak.  Indeed, with the US market at one point up 20% from its low, some were already heralding a new bull market, after what has been the fastest descent into a bear market in history.  2020 is certainly one for the record books!

It’s easy to find reasons for why the market bounced.  For starters, the market was deeply oversold on a range of technical indicators.  Second, the Fed’s provision of $US funding to global markets appears to have lessened some stresses, as evident by an easing back in the $US, US bond yields and gold a few days before the bottom in equity markets.  Third, although US lock downs intensified, markets took a view that this might help contain the virus sooner rather than later –  encouraged by Trump’s hope that restrictions could be lifted by Easter (April 12 to be exact).  Last but not least, extended negotiations over US fiscal stimulus – which was finally concluded on Friday – allowed the market to “buy the rumour” for a few more days than would have otherwise been the case.

Heading into the new week, harsher realities may again confront the market.  As in Australia, while US fiscal stimulus is extensive, it hasn’t changed most economist expectations for a very deep US recession at least over the June quarter – this week Wall Street may now “sell the fact” regarding Washington’s efforts.  With US virus cases building in other States (apparently partly due to New Yorkers fleeing their own war zone), hopes for a speedy end to US restrictions may also be quashed.

In terms of global data, key highlights last week were the surge in US weekly jobless claims from 282k to 3.3 million, along with major slumps in US and European service sector indices.  Jobless claims on Thursday and US payrolls on Friday will be the highlights, though the market has likely already discounted very poor outcomes.  Instead, expect markets to remain fixated by whether US virus cases continue to accelerate (or not) and whether other US cities and towns go into “lock down”.

Globally the virus picture remains mixed, moreover, with tentative signs of a slowing in new cases in Italy but further acceleration in other parts of Europe. We also need to keep a close watch on Asia, given the risk of a “second wave” of cases as restrictions are gradually eased.  On a brighter note, reports of faster testing procedures and drug trials keep hopes alive that we may be able to contain the virus in less economically damaging ways at some stage in coming months.

All up, my base case is that last week was a bear market rally, and new lows – suggesting a 50% or more peak to trough US market decline – still seem likely in the weeks or even months ahead.  Indeed, even if the rate of new global virus cases slows soon – which is still a big ask – growth depressing social distancing provisions are likely to linger until such time as better drugs ride to the rescue.  In the meantime, we also face the challenge of corporate debt refinancing and a massive hit to corporate earnings in the months ahead.  Like most, however, I’m counting on better drug treatments ending this nightmare eventually.

Indeed, given the speed and depth of the market decline already, this could yet also end up as one of the shortest bear market’s in history (as defined by the duration of the peak-to-trough decline).  That said, even if the market touches a bottom, a speedy recovery to past market highs seems very unlikely – given the large step down in corporate earnings that will have been inflicted.

Australia really is just following global developments these days – now more than ever.  Our cases continued to accelerate last week, though there were tentative signs of slowing in New South Wales.  Policy responses remain mixed for markets – with helpful doses of fiscal stimulus announced at the same time as even tighter growth destroying social distancing provisions.

Helped by a return of risk-on sentiment and the Fed’s alleviation of global $US shortages, the $A bounced last week. It’s premature to get too bullish, however, especially if global equity markets take another lurch lower.

At last week’s closing low, the S&P/ASX 200 had come off a whopping 36% from its peak.  Based on earnings as at end-January, this meant the market’s price-to-forward earnings ratio fell from a lofty 18.4 to more reasonable 11.7.  That would suggest value, of course, were it not for the fact that our already sluggish earnings outlook is likely to be crushed by downgrades in the next few months.  As is the case in the US, I still feel we may have not yet seen the worst for the market. 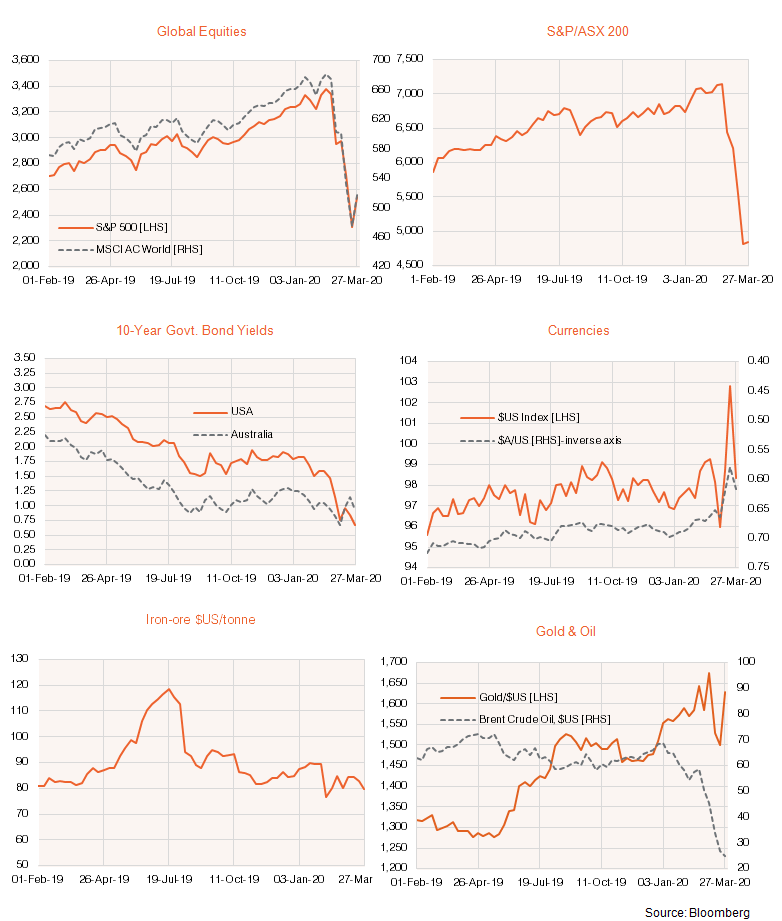