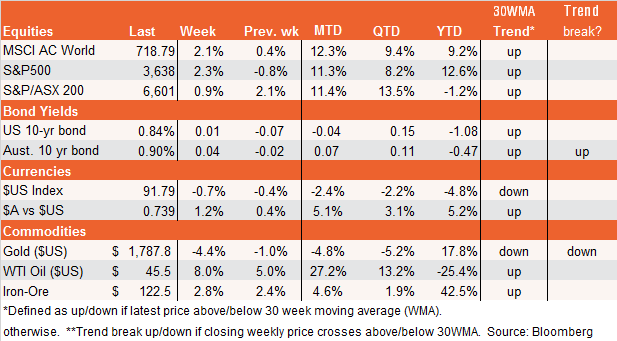 Last week again highlighted the forward-looking nature of markets, with global equities pushing higher on further positive vaccine news, despite a softening in economic data and ever-rising COVID cases in the United States. Trump also edged closer to conceding defeat, allowing his bureaucrats to a least start making the necessary steps for transition. Ongoing risk-on sentiment saw value sectors like energy and financials again beat growth sectors like technology (though the latter also rose nicely). The $US and gold prices also remain in retreat, though bond yields are still remarkably subdued. The $A also remained firm, despite an escalation in Australia-China trade tensions.

Oxford-AstraZeneca became the third group to announce a serious vaccine contender. While it is more easily stored and transported than the Pfizer and Moderna offerings, its initial success rate was somewhat lower at 70%. That said, the group also indicated a trial undertaken by mistake suggested a success rate similar to the others of 90% – if the vaccine was administered in two doses (with the first dose somewhat smaller than the second). Oxford-AstraZeneca have indicated they will undertake a further trial to confirm this outcome.

Markets are also trying to deal with the leads and lags associated with COVID cases, social distancing restrictions and the impact on economic growth. In Europe, for example, the bad news last week was that service and manufacturing PMI indices slumped in November, as expected, due to renewed restrictions – though the good news is that restrictions also appear to have led to a levelling-off in the latest waves of cases. In the U.S., PMI indices remained firm in November, though rising COVID cases and a gradual tightening in restrictions are now posing a near-term risk to the growth outlook – as most evident in the recent rebound in U.S. weekly jobless claims.

The global highlight this week will be U.S. November payrolls on Friday, which are likely to show still solid but slowing employment growth, with around 500k new jobs expected. OPEC is also expected to confirm a delay in a planned January production increase, due to still-subdued global demand. Testifying before the U.S. Congress – alongside Fed chair Powell –  Treasury Secretary Mnuchin will likely be quizzed about his recent decision to reign in stimulus funding provided to the Fed. Last but not least, markets may well soon start reacting to piecemeal news on the formal approval and actual rollout of vaccines – most likely to begin with high priority groups like medical workers.

The local equity market participated in the global rally last week, though with somewhat less gusto than seen in earlier weeks. As evident globally, ‘value’ parts of the market like financials are making a valiant effort to outperform growth sectors like technology – which likely reflects an unwinding of the COVID safety premium that gave the latter stocks added impetus this year.

What’s more, as noted above, risk-on sentiment continues to push the $A higher – despite heightened trade tensions with China and the RBA’s efforts to slash its yield attractiveness to foreign buyers. The RBA would likely not be amused, but might argue the $A might have been even higher had it not acted last month.

With internal borders re-opening, the outlook for the local economy is clearly improving – though investors need to be mindful that our state governments appear to have very low tolerance for any renewed COVID outbreaks, and so could easily shut things down again at a moment’s notice (as in South Australia). Though tensions with China are attracting the headlines, so far at least the knock to the economy from the exports affected appears to be relatively small – though this could obviously change if China’s actions escalate to affect more major export areas such as iron-ore. What we can do is unclear – the Government seems very unlikely to cave into Chinese demands, and China seems to be enjoying throwing its weight around in any case. The Government can and should challenge export restrictions via the World Trade Organisation (from which China benefits hugely as a member), but this process is painfully slow.

Either way, low rates and ample fiscal stimulus have underpinned decent bouncebacks in consumer spending and housing activity, while business capital spending could also soon lift following the Federal Government’s extension of the instant asset write-off to virtually all companies.

The local highlight this week will be Wednesday’s Q3 GDP result, which is likely to show a consumer-led growth rebound of around 2 to 3%, following Q2’s 7% slump. Tomorrow, Core-Logic is likely to reveal a back-to-back lift in monthly national house prices took place in November, suggesting the worst may already be over on that front. Given its momentous changes last month, we should expect little action from the RBA at tomorrow’s policy meeting, though how it describes the $A could be of interest given its strength over the past month – likely contrary to RBA wishes. 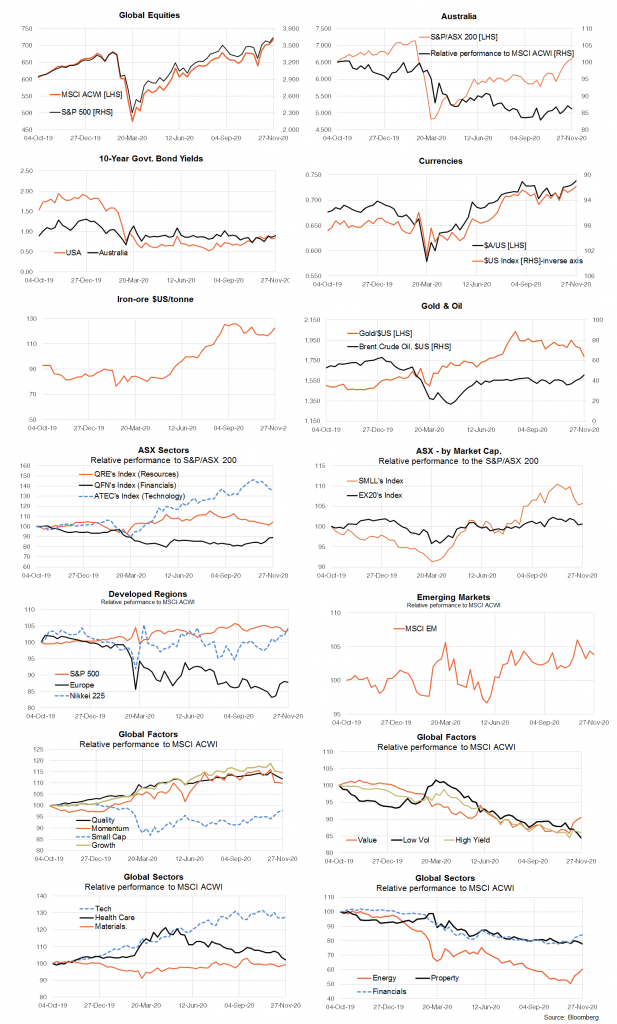